Medmen Enterprises Inc (OTCQB: MMNFF) has been running up the charts in recent days since reversing off $0.0969 lows. Medmen was one of the biggest losers among pot stocks over the past 2 years and has a lot of zing left in it at current levels. The recent exit of Company founder Adam Bierman has given new hope to many of the Company s investors.

Medmen was one of the most promising pot stocks on the market less than 2 years ago. We reported on Medmen at the time as it was topping $7 per share noting: “Medmen Enterprises is racing up the charts after announcing they have signed a binding letter of intent to acquire PharmaCann in an all-stock transaction valued at $682 million. The deal is considered to be the biggest M&A deal to date within the legal marijuana industry and it will make Medmen the “largest U.S. cannabis company in the world’s largest cannabis market.” The newly combined entity will result in MedMen having cannabis licenses in 12 states that will permit the combined company to operate 79 cannabis facilities. Through the transaction, MedMen will add licenses in Illinois, New York, Pennsylvania, Maryland, Massachusetts, Ohio, Virginia and Michigan.”

Medmen Enterprises Inc (CSE: MMEN) (OTCQB: MMNFF) still describes themselves as North America’s premium cannabis retailer with flagship locations in Los Angeles, Las Vegas, Chicago and New York. Through a robust selection of high-quality products, including MedMen-owned brands [statemade], LuxLyte and MedMen Red, and a team of cannabis-educated associates, MedMen has defined the next generation discovery platform for cannabis and all its benefits. MedMen’s industry-leading technology enables a fully compliant, owned-and-operated delivery service and MedMen Buds, a nationwide loyalty program. MedMen believes that a world where cannabis is legal and regulated is safer, healthier and happier.

The Company went public in 2018 through a reverse takeover in Canada. At the time the sky seemed the limit, the Company quickly established themselves as a leading cannabis company in the U.S. with assets and operations across the country. Based in Los Angeles, MedMen brings expertise and capital to the cannabis industry. 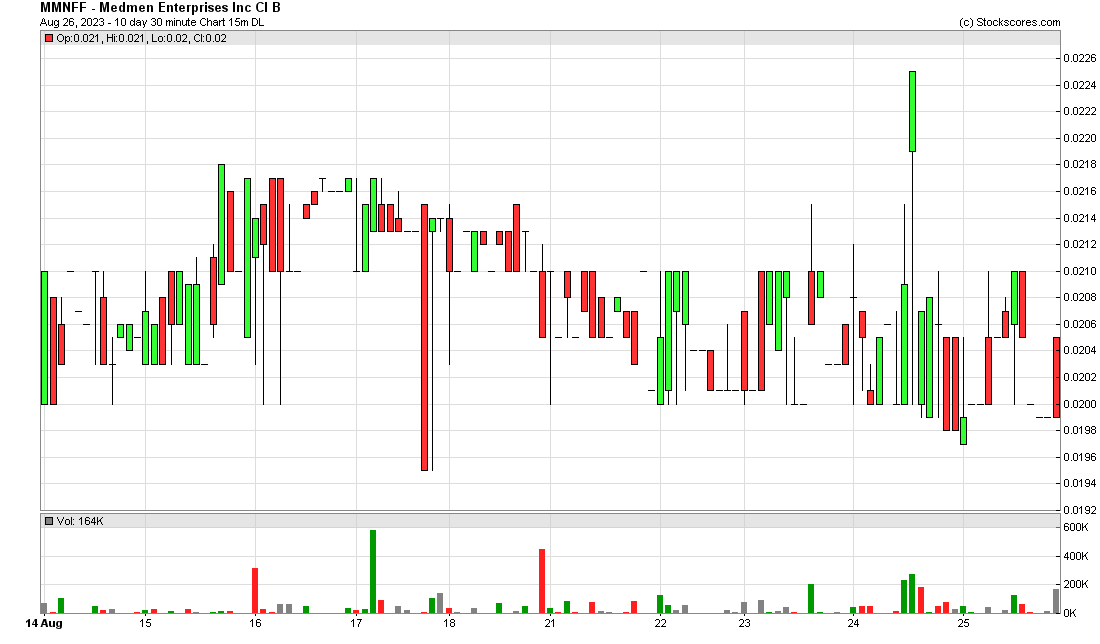 In February Medmen reported its consolidated financial results second quarter 2020 ended December 28, 2019. All financial information in this press release is reported in U.S. dollars, unless otherwise indicated. Revenue: Systemwide revenue across MedMen’s operations in California, Nevada, New York, Illinois and Florida increased to $44.1 million for the quarter, up 50% year-over-year and 11% sequentially. Revenue figures do not include the Company’s operations in Arizona, which are in the process of being divested and are classified as discontinued operations in the Company’s financials. The Company reported an Adjusted EBITDA loss of $35.1 million for the quarter. The Adjusted EBITDA for the quarter does not include additional headcount reduction and retail optimization efforts the Company executed on subsequent to the quarter end. The Company’s cultivation and manufacturing facilities contributed to $11.4 million of the total EBITDA loss.

On March 25 Medmen announced the appointment of Errol Schweizer to its board of directors. Mr. Schweizer has over 25 years of experience in the food and cannabis industries, including 15 years at Whole Foods Market, where he held a number of roles within the organization, including Vice President of Grocery. In this role, Mr. Schweizer oversaw merchandising, product assortment, promotional programs and financial performance for over 80 product categories and $5 billion in annual sales. Mr. Schweizer departed Whole Foods Market in 2016 and has been a strategic advisor to several high-growth retailers and brands.

Simultaneous to Mr. Schweizer’s appointment, the Company announces that Jay Brown resigned from the Company’s Board, effective March 24, 2020. Mr. Brown has left the Board in order to focus on other business endeavors and will continue to serve as a strategic advisor to the Company’s management team.

Currently trading at a $63 million market valuation Medmen was once one of the largest marijuana dispensary operators in the United States; after the PharmaCann acquisition Medmen touted the deal as the biggest M&A deal to date within the legal marijuana industry and it will make Medmen the “largest U.S. cannabis company in the world’s largest cannabis market. Medmen topped $7 on the news but it was all downhill from there culminating in a recent brief dip below a dime. Since them Medmen has been running; at current price levels many investors and speculators have been accumulating and many speculate Medmen holds assets significantly more than its tiny market valatuion implies. We will be updating on Medmen when more details emerge so make sure you are subscribed to Microcapdaily so you know what’s going on with Medmen.