Vivos Inc (OTCMKTS: RDGL) has seen some big moves in the past running from $0.02 mark to over $0.35 per share back in 2018. The stock saw another big move in 2019 to around a dime and investors are wondering what comes next.

Microcapdaily has been covering RDGL for years reporting back on September 3, 2018 – Vivos Inc “RDGL” continues to trade huge volume in recent weeks sometimes topping $100k per day in dollar volume but so far the stock has made no significant move. While this is an exciting Company with an intuitive product that could disrupt a major industry if it ever gets approved by the FDA the Company carries over $10 million in debt on the books and the note holders are having a field day. We also covered the Company back when it was called Advanced Medical Isotope Corp reporting back in 2015 – “ADMD” is an exciting story developing in small caps that has transformed in recent days from thinly traded to one of the top traded stocks on the bb’s. ADMD is one of those Companies that knows how to market itself and has quickly attracted a loyal shareholder base that believes this one goes much higher.

Vivos Inc (OTCMKTS: RDGL) has developed an Yttrium-90 based brachytherapy injectable device, for the treatment of tumors in animals (IsoPet®) and in humans (Radiogel™). Brachytherapy uses highly localized radiation to destroy cancerous tumors by placing a radioactive isotope directly inside the treatment area using the company’s proprietary hydrogel formulation. The injection delivers therapeutic radiation from within the tumor without the entrance skin dose and associated side effects of treatment that characterize external-beam radiation therapy. This feature allows safe delivery of higher doses needed for treating both non-resectable and radiation-resistant cancers.

IsoPet® is a hydrogel liquid containing tiny yttrium-90 phosphate particles that may be administered directly into a tumor. The hydrogel is an yttrium-90 carrier at room temperature that gels within the tumor interstitial space after injection to keep the radiation source safely in place. The short-range beta radiation from yttrium-90 localizes the dose within the treatment area so that normal organs and tissues are not adversely affected.

To Find out the inside Scoop on RDGL Subscribe to Microcapdaily.com Right Now by entering your Email in the box below 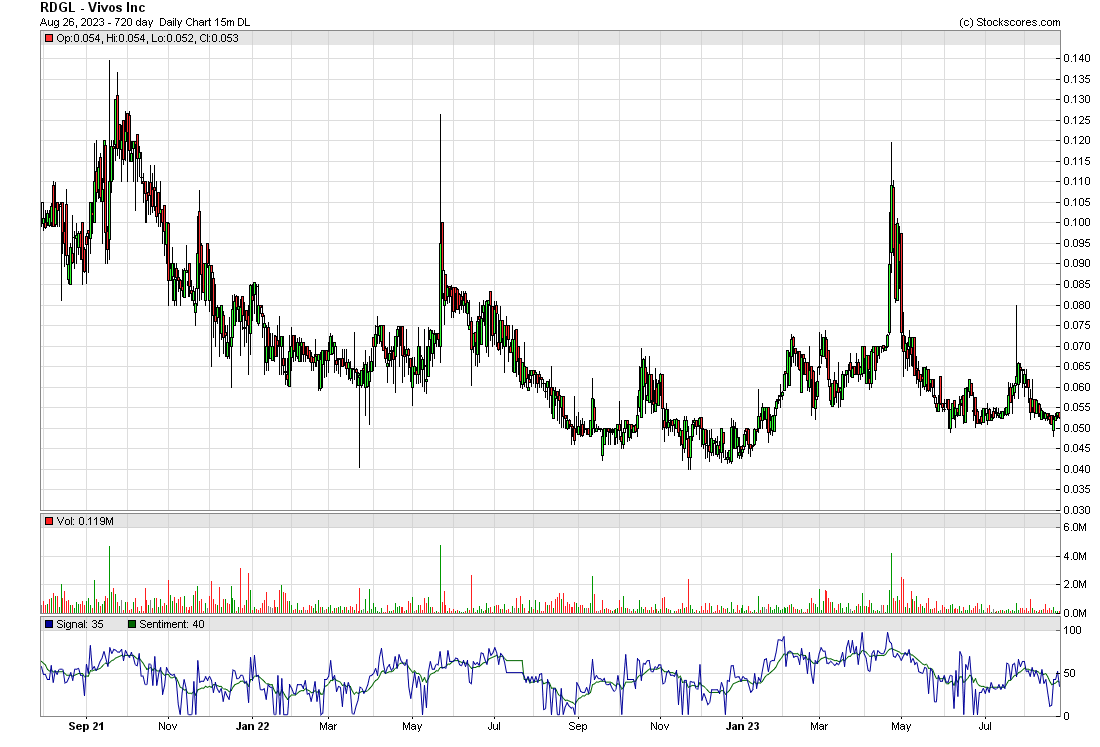 The Company recently obtained confirmation from the FDA Center for Veterinary Medicine that IsoPet®® is classified as a device according to its intended use and means by which it achieves its intended purpose. The FDA also reviewed the product labeling which included canine and feline sarcomas as the initial indications for use. FDA does not require pre-market approval for veterinary devices so no additional approval is required for treating skin cancer, which is the largest market sector. Following this demonstration phase, Vivos can begin to generate revenues through the sale of IsoPet®® to University animal hospitals and private veterinary clinic consortiums.

On February 6 Vivos announced the University of Missouri College of Veterinary Medicine will be the first Isopet® regional clinic. The Isopet® therapy will now be included as a treatment option within their extensive veterinary cancer therapy portfolio. Following our recently completed clinical study of Isopet® at the University of Missouri’s College of Veterinary Medicine, we are excited to announce that they have agreed to offer Isopet® as a commercially available therapy option. This makes MU the first regional center to offer Isopet® in addition to our Vista pilot clinic located in the state of WA.

During this past year, we have received multiple inquiries from pet owners who wanted to use Isopet® but were unable to fly long distances with their animals in the cargo hold. Adding this new treatment center will greatly enhance Vivos’ geographic coverage and increase the patient population with convenient access to Isopet® therapy.

Currently trading at a $5.4 million market valuation RDGL is fully reporting OTCQB with $158k in the treasury and very little debt of $1.3 million in current liabilities. We have covered RDGL for years and commented on them back in the day – RDGL is an exciting story developing in small caps; the Company is focused on expanding animal testing and the pre-clinical testing required for the Investigational Device Exemption required by the FDA to initiate clinical trials for human skin cancer therapy as well as pursuing development and commercial sales in the animal health sector with IsoPet™.” RDGL  still has a large sharehlder base who is waiting for something to happen. We will be updating on RDGL when more details emerge so make sure you are subscribed to Microcapdaily so you know what’s going on with RDGL.

Disclosure: we hold no position in RDGL either long or short and we have not been compensated for this article