Alpine 4 Technologies Ltd (OTCMKTS: ALPP) saw a fast rise towards the end of 2019 making a spectacular run up the charts from around half a penny ($0056 lows) to highs of $0.44 per share. Some shareholders sold out and cashed in while many others, who rode it all the way back down are wondering how things are going to pan out.

Alpine 4 has attracted a large following in a relatively short period of time and its easy to see why- the Company has seen significant growth through acquisition reporting $7,088,182 in sales for the 3 months ended September 30, 2019 up from $4.3mm for the same period last year. Alpine 4 has also secured an investment bank in connection with its plans to seek to up list to a national securities exchange.

Alpine 4 Technologies Ltd (OTCMKTS: ALPP) bills itself as a publicly-traded conglomerate that is acquiring businesses that fit into its disruptive DSF business model of Drivers, Stabilizers, and Facilitators. At Alpine 4 we understand the nature of how technology and innovation can accentuate a business. The Company has a number of revenue producing subsidiaries including Quality Circuit Assembly, Inc., Morris Sheet Metal Corp, Deluxe Sheet Metal, and ALTIA which recently reached an agreement with a California based Hyundai dealership, for the newly updated Brake Active product line.

According to Alpine 4 – Four principles at the core of our business are Synergy. Innovation. Drive. Excellence. At Alpine 4, we believe synergistic innovation drives excellence. By anchoring these words to our combined experience and capabilities, we can aggressively pursue opportunities within and across vertical markets. We deliver solutions that not only drive industry standards but also increase value for our shareholders.

Alpine 4 has also recently created a new operating entity Spectrumebos, Inc. in anticipation of releasing its Blockchain Enterprise Business Operating System to the small and midcap public market in 2021.

$ALPP has acquired Deluxe Sheet Metal! It will be added to ALPP’s Construction Services portfolio. We anticipate Deluxe contributing $14mm annually and will have an immediate impact on Q4. pic.twitter.com/HAgTg0IccQ

The Company has seen significant growth through acquisition – In November Alpine 4 acquired Deluxe Sheet Metal, a company that has been in business for over 45 years, specializing in all aspects of Commercial and Industrial Sheet Metal installations. Servicing top research institutions like the University of Norte Dame and large companies like GE, Deluxe is the go-to company for complex thermal and HVAC design in their region. Completed in 2004, Deluxe’s facility is home to a 59,000-square-foot building purposefully tucked away into a hillside on South Bend’s northwest side. Within their building is a 35,000 square foot fabrication shop filled with skilled Union craftsmen and some of the latest in modern equipment and advanced technologies giving Deluxe the abilities to meet some of the most arduous demands of today’s complex construction projects. The facility is one of the most modern operations in the area.

To Find out the inside Scoop on ALPP Subscribe to Microcapdaily.com Right Now by entering your Email in the box below 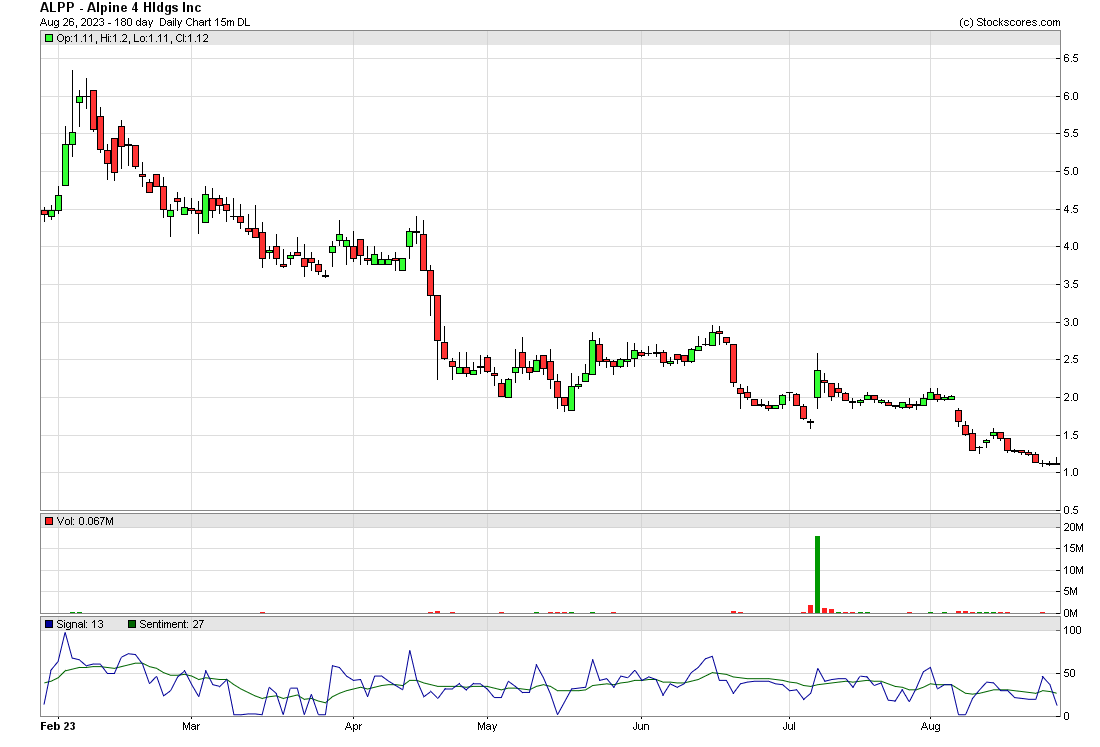 Deluxe has already been a winner for Alpine 4 announcing a $1 million contract on January 27 with one of its university customers for new building projects for the university in 2020. In January alone Alpine 4 subsidiaries have announced $4.7 million in new contracts.

Some of these contracts include:

The big story on Alpine 4 is the enormous sales: on January 5 the Company provided preliminary guidance for its 2019 revenue. The company expects to report for 2019 sales of $28 million, which is revenue growth of approximately 96% over 2018.

Kent B. Wilson, Alpine 4 CEO, had this to say: “In 2019, we advanced on many initiatives corporate-wide.  Ranging from two new acquisitions, accelerated growth, restructuring of debt and much more.  But our sales growth is a testament to the hard-working and dedicated employees of Alpine 4 and our subsidiaries.  We are all very proud of you and appreciate your hard work!”

The CEO of Alpine 4 is Kent Wilson – Before being named CEO/President in June 2014, Mr. Wilson was the Chief Financial Officer of United Petroleum, Inc and was responsible for all of the company’s financial and reporting operations, including end-to-end management of company’s supply chain, and financial support systems. In prior years he also served as the Chief Executive Officer of Crystal Technologies, Ltd a technology company serving both the automotive industry and the insurance industry. Kent played a key and critical role in the development and deployment of a strategic web-based insurance platform for automobile dealerships. Mr. Wilson earned his MBA from Northcentral University and considers himself a “University of Arizona Wildcat”. He also spent 4 years studying at the University of Arizona before earning his undergraduate degree in Management from the University of Phoenix. Mr. Wilson also serves on the Board of Directors for Restoration Ministries dba Crossroads Youth a faith based organization dedicated to helping at risk children of the working poor in downtown Phoenix.

$ALPP CEO Kent Wilson and VP of sales at QCA, Tim Garcia, at Facebook headquarters today for a vendor meeting. Happy to be collaborating with our partners! pic.twitter.com/JmGfxvGsbJ

Alpine 4 is focused on up listing to a higher exchange – On December 27, 2019, the Company entered into an agreement with a New York-based investment bank/broker dealer. Pursuant to the agreement, the Advisor agreed to serve as a financial advisor, placement agent, and investment banker for the Company in connection with the Company’s previously announced plans to seek to uplist to a national securities exchange.  The Advisor will work with the Company to provide capital raising advice, strategic planning, and other financial services. The Company will provide additional information relating to its plans for the up listing as required.

Currently trading at a $9 million market valuation ALPP is fully reporting OTCQB will plans to up list to a national exchange. The Company does have $18 million in current liabilities and just received a commitment of up to $10 million from Lincoln Park Capital, both of these are potential problems. but ALPP is an exciting story developing in small caps – the Company has seen significant growth through acquisition and expects to report sales of $28 million in 2019, which is revenue growth of approximately 96% over 2018. The Company has also secured an investment bank in connection with its plans to seek to up list to a national securities exchange. ALPP has a significant shareholder base who believe in the Company and its all-star CEO, who looks to be focused on building a real company and long term shareholder value. We will be updating on ALPP when more details emerge so make sure you are subscribed to Microcapdaily so you know what’s going on with ALPP.

Disclosure: we hold no position in ALPP either long or short and we have not been compensated for this article.