Amfil Technologies Inc. (OTCMKTS: FUNN) soon to be renamed to Snakes & Lattes Inc. stock is northward bound moving up steadily every day on heavy accumulation as the Company makes a number of big moves. FUNN bottomed out at just under a penny after months of decline, made a serious reversal and has been northward bound since more than doubling from its lows at the beginning of January. FUNN which used to trade under the ticker AMFE has a significant international following and now that a real reversal has been established, they are busy buying back in. The stock’s recent high is $0.059 in early 2021 but long before that FUNN traded as high as $0.235 per share when the Company had just 1 or locations. As Snakes & Lattes is a physical business, the Company was hit hard by the coronavirus but has come out stronger the other side. Now with lockdowns behind us, Snakes & Lattes is doing better than ever and is in rapid expansion mode once again, opening its 8th and 9th locations just over the past 2 months alone.

In a really big move; Snakes & Lattes signed a deal with MrBeast; one of the most successful youtubers on the platform with 92.9 million subscribers. Through a partnership with Virtual Dining Concepts (VDC) the Company plans to initially roll out Mr. Beast Burgers in 2 pilot locations, Utah and Toronto and then roll the brand to all of its locations. Mr. Beast Burgers, from Jimmy Donaldson (MrBeast), has turned into a global phenomenon overnight with over 1,000 locations in North America and Europe and immediate plans to increase the number of locations exponentially and go Worldwide. Getting MrBeast Burger into Snakes & Lattes was a big move from the Company and is expected to immediately increase revenues. Although management has not given us a projection 2022 revenues should be minimum $10 million with 9 locations open, probably much more.

Amfil Technologies Inc. (OTCMKTS: FUNN) is the parent company to three wholly owned subsidiaries the most exciting of which is Snakes & Lagers Inc. which holds the trade name and is the owner of Snakes & Lattes Inc. which currently operates 9 locations and growing fast. Snakes & Lattes Inc. was the first board game bar and cafe in North America, is believed to be the largest in the world and has the largest circulating public library of board games in North America for customers to choose from. Snakes & Lattes Inc. currently has a 100+ member staff and a strong management team including CEO Ben Castanie, Susan Lawver, Aaron McKay, Larry Leverton and Roger Mortimer. The Company recently acquired the exclusive distribution rights throughout Canada for some of the most popular board games in the world. Snakes & Lattes also operates a lucrative fulfillment and distribution division and has recently entered into the board game publishing business through the acquisition of Morning which is expected to add significant revenues to the bottom line. To this end the Company is already selling board games such as KTU/Red Panda/Pigicorn to over 192 Individual Retailers + 125 locations for retailers with multiple locations (296 total) and on Amazon USA : England : France : Germany : Italy : Canada : Saudi Arabia : Australia and Singapore.

Microcapdaily has reported on FUNN before, back in 2018 when the stock was AMFE we wrote: The big story on AMFE is Snakes & Lagers Inc. which currently operates 3 tabletop gaming bars and cafes located in Toronto, Ontario that brought in over $7M CAD in revenue last year. The company is in the process of franchising throughout North America.

Looking forward to the next update!

To Find out the inside Scoop on FUNN Blockchain Subscribe to Microcapdaily.com Right Now by entering your Email in the box below 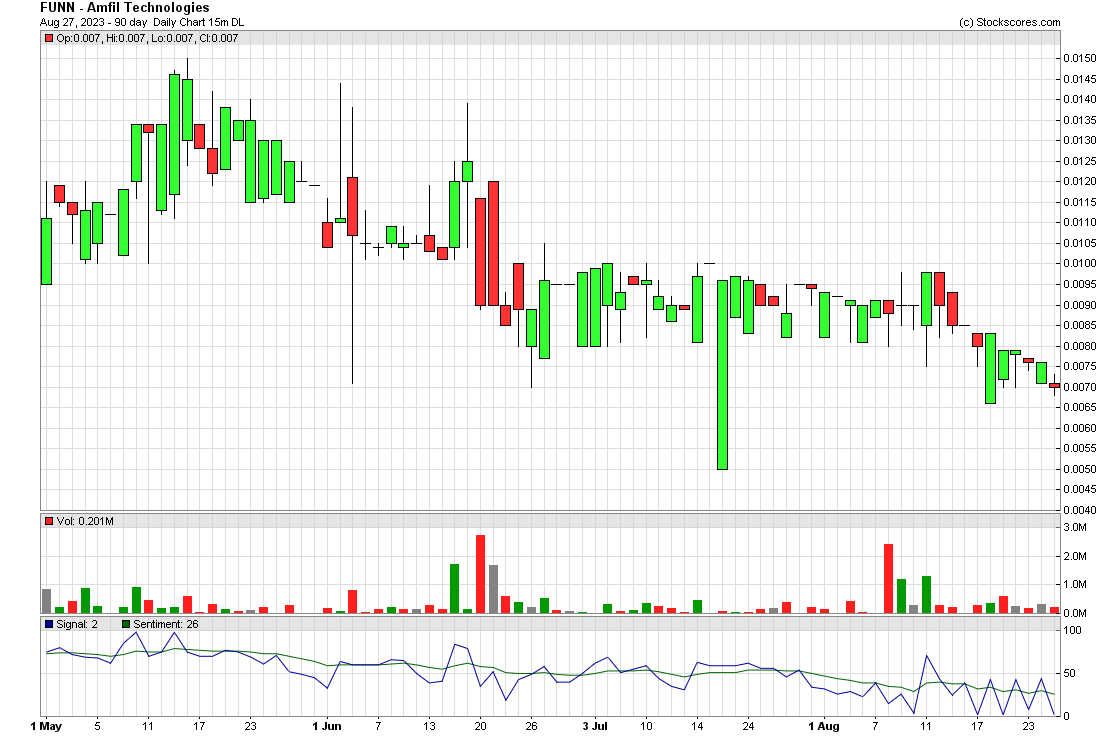 FUNN has been busy; just over the past 2 months Snakes & Lattes has opened 2 new locations; they acquired number 8, the Good Move Caf in Provo, Utah in March in an all-cash deal. Good Move Caf was established in 2017, at 1 E Center St Ste 100, Provo, UT 84606 near Brigham Young University. They have always been innovators; introducing game rentals, retail, and a membership program since opening. It has quickly become a hot spot for students and locals alike. Well managed and highly reviewed with over 1100 Google reviews averaging 4.6. At ~4,150 sq. ft. it is a wonderfully sized location for plenty of patrons to get their feasting and gaming on! Given the influence of the Church in the area, it will keep its namesake while operating under the Snakes & Lattes brand. Good Move Caf represents a one-off from the traditional S&L location and operates slightly different due to local culture. The Company has infused the location with elements of the Snakes & Lattes brand, such as an official retail / gift shop, rental / delivery activities and a subscription program. However, management feels it is important to recognize the values held in this region and such differences mean keeping the local name. It is clearly a successful business and a great opportunity to expand the Company’s North American footprint. In April the Company acquired its 9th location; Gamehaus in Glendale, California via ownership of the outstanding SBA loan. Gamehaus was established in 2013 by Rob Cron and Terry Chiu. Located near Hollywood at 1800 South Brand Blvd., #107 Glendale, CA. The Gamehaus already has an established game library of over 1400 titles. FUNN Management plans to further increase capacity from current 100 seats by expanding and turning the adjacent space into retail space have started. This marks the Company’s first location in the state of California. The location will stay open during the transition with the rebrand launch coming this summer along with a local social media campaign.

This Ninth location represents another conversion out of many FUNN Management is exploring across the United States and Canada. Opportunities continue to come in with one-off locations proactively reaching out to consider a conversion to the Snakes brand. When management finds a caf that meets its requirements for; size, market potential, location relative to the Snakes & Lagers brand demographics, financially sound post due diligence, and ease of transition management begins the deep dive review process. These conversions are a separate list from the USA expansion team efforts and represent another stream for corporate growth. More information on the USA expansion team to come! With its first true West Coast location, FUNN Management is excited to continue its plan to have Snakes & Lattes brand locations coast to coast in North America.

Currently trading at a $14 million market valuation FUNN has 757,486,406 shares outstanding and is capped there as AS is set at 800 million. While the stock price has been decimated in recent years, the Company has come out of the pandemic stronger than ever with all of its locations re opened and already in rapid expansion mode once again, opening locations number 8th and 9th just over the past 2 months alone. FUNN stock is moving steady northbound with power and this is a stock with a history of big moves with runner in its blood skyrocketing to $0.235 per share back in 2017 when the Company had just 1 location. Now with the pandemic behind it and all 9 locations of Snakes & Lattes operating at full throttle, the expansion team working hard securing new locations, FUNN significant international following is heavily accumulating and looking back at the stocks previous highs of $0.235 per share. At a $14 million total market valuation, location #10 coming any day and a new deal with Mr. Beast Burgers, FUNN has a lot of catalysts in place, ready liquidity, momentum and a lot of room to grow fast.   Currently investors are awaiting audited financials and a possible up listing. We will be updating on FUNN when more details emerge so make sure you are subscribed to Microcapdaily so you know what’s going on with FUNN.

Disclosure: we hold no position in FUNN either long or short and we have not been compensated for this article.