Anavex Life Sciences Corp (NASDAQ: AVXL) has been on the move northbound after Berenberg Bank assumed coverage on the stock with a price target of $40 per share. AVXL is among the most compelling stories in small caps targeting the holy grail of medicine; Alzheimer’s disease and other neurodegenerative diseases. Alzheimer’s disease is among the top ten leading causes of death in the US representing an enormous market expected to be worth at least $6 billion by 2027. While many newsletters have covered the rise of AVXL Microcaspdaily was first on the scene back on April 2, 2015 when AVXL was at $0.20 per share, reporting at the time: “Anavex Life Sciences Corp (OTCMKTS:AVXL) is making an explosive move up on accelerating volume after reversing off $0.15 a share. Under the able leadership of Christopher Missling the successes for AVXL have been adding up as ANAVEX 2-73 received an orphan and a Fast Track designation from the FDA in Rett Syndrome, which has potential to receive a Pediatric Priority Review Voucher, worth millions of dollars. Rett Syndrome is a genetic disease that affects young females and leads to various neurological impairments and has no known cure and only symptomatic treatments. Anavex Life Sciences Corp (NASDAQ: AVXL) is a clinical stage biopharmaceutical company engaged in the development of differentiated therapeutics by applying precision medicine to central nervous system (“CNS”) diseases with high unmet need. We analyze genomic data from clinical studies to identify biomarkers, which we use to select patients that will receive the therapeutic benefit for the treatment of neurodegenerative and neurodevelopmental diseases.

AVXL currently have two core programs and two seed programs. The Company’s core programs are at various stages of clinical and preclinical development, in neurodegenerative and neurodevelopmental diseases. SIGMAR1 is an important protein that influences multiple cellular and physiological pathways by being located at the confluence of the mitochondria and the endoplasmic reticulum. According to reports, blarcamesine has “memory-preserving and neuroprotective effects in mice treated with the muscarinic receptor antagonist scopolamine, with synthetic Aβ oligomer injection, or with the NMDA receptor agonist dizocilpine (Villard et al., 2011). Other studies in the Aβ oligomer injection model suggest that blarcamesine may block tau hyperphosphorylation and protect mitochondria (Jan 2013 conference news; Lahmy et al., 2013; Lahmy et al., 2014).”

$AVXL has several promising phase 2/3-studies against neurological disorders in their pipeline. These types of diseases are very difficult to develop treatments for, but whomever is succesful will be rich. High risk/reward🖖 pic.twitter.com/HhRRJukVro

To Find out the inside Scoop on AVXL Subscribe to Microcapdaily.com Right Now by entering your Email in the box below 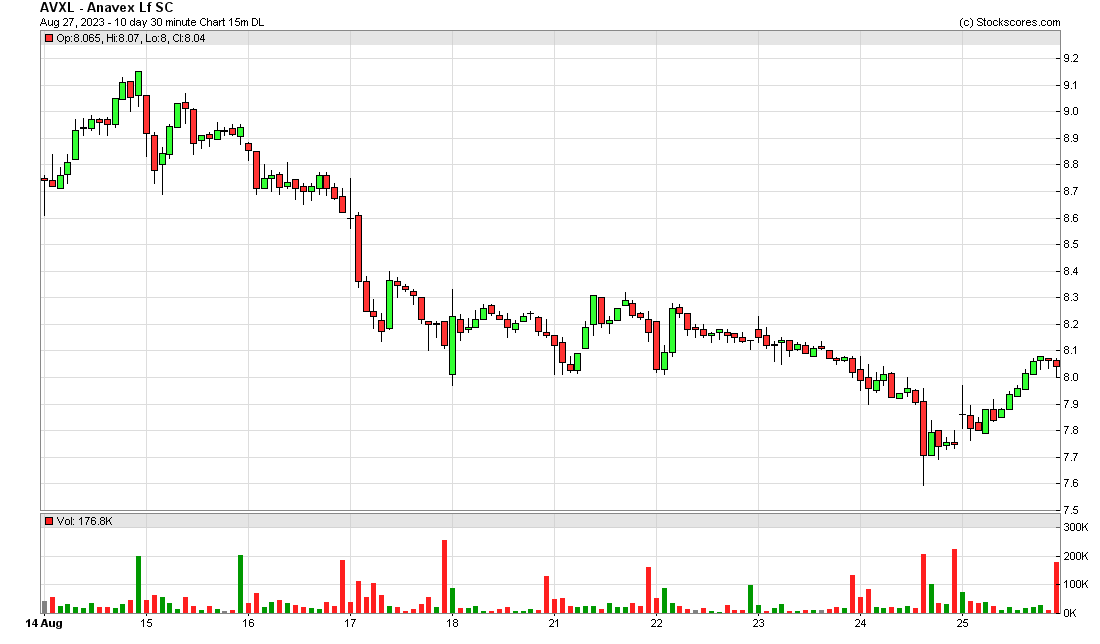 A full genomic analysis of Alzheimer’s disease (AD) patients treated with ANAVEX®2-73 resulted in the identification of actionable genetic variants. A significant impact of the genomic biomarkers SIGMAR1, the direct target of ANAVEX®2-73 and COMT, a gene involved in memory function, on the drug response level was identified, leading to an early ANAVEX®2-73-specific biomarker hypothesis. It is expected that excluding patients with SIGMAR1 identified biomarker variant (approximately 10%-20% of the population) in prospective studies would identify approximately 80%-90% patients that would display clinically significant improved functional and cognitive scores. The consistency between the identified DNA and RNA data related to ANAVEX®2-73, which are considered independent of AD pathology, as well as multiple endpoints and time-points, provides support for precision medicine clinical development of ANAVEX®2-73 by using genetic biomarkers identified within the study population itself to target patients who are most likely to respond to ANAVEX®2-73 treatment in AD as well as indications like Parkinson’s disease dementia (PDD) or Rett syndrome (RTT) in which ANAVEX®2-73 is currently studied. The global alzheimer’s disease treatment market is expected to grow from $3.76 billion in 2021 to at least $5.91 billion in 2025 at a CAGR of 12%. According to the Centers for Disease Control and Prevention, Alzheimer’s is among the top 10 leading causes of deaths in the United States. The death rate for the disease has increased significantly in the U.S. over the past few years. More than 122k deaths were reported in the country due to Alzheimer’s disease in 2018. Highly prevalent among the people with age group of 85 and above, around 5.7 million people are living with Alzheimer’s Disease in the U.S. The World Health Organization (WHO) added that causing disability majorly among older people, Alzheimer’s disease contributes to 60-70% of dementia cases, currently amounting to around 50 million cases globally. Around 10 million new cases are recorded every year. Growing advancements in ever-evolving medical technologies over the years have resulted in remarkable discoveries, further leading to development of effective medicines, treatments and therapies. Alzheimer’s treatment is one such field where continuous research and clinical trials have led to the development of various effective treatments that are not just limited to discovery of drugs but also cognitive trainings and therapies. On the back of continuous research and advancement in medical science to find potential new treatments and helping patients manage their behavioral symptoms.

AVXL is quickly emerging as one of the most exciting stocks in small caps targeting the holy grail of medicine; Alzheimer’s disease and other neurodegenerative diseases. Alzheimer’s is among the top 10 leading causes of deaths in the United States.  As we have always said here at Microcapdaily on AVXL the Company has got everyone’s attention; AVXL is sitting on drugs in development that could potentially disrupt several enormous markets. Anavex2-73 has shown impressive safety records in early stages of clinical trials. Anavex2-73 is a S1R agonist with moderate affinity and has produced impressive clinical results from double-blinded studies treating Rett syndrome and Parkinson disease dementia. Currently it is in a phase II/III trial for Alzheimer’s disease. While many newsletters have covered the rise of AVXL Microcapdaily was first on the scene back on April 2, 2015 when AVXL was at $0.20 per share.  We will be updating on AVXL when more details emerge so make sure you are subscribed to Microcapdaily so you dont miss out.

Disclosure: we hold no position in AVXL either long or short and we have not been compensated for this article
Share
Facebook
Twitter
Pinterest
WhatsApp
Previous articleTrans Global Group, Inc. (OTC: TGGI) Under Heavy Accumulation on Reverse Merger with Global Ambitions
Next articleGuskin Gold Corp (OTCMKTS: GKIN) Breaking Out Northbound as Gold Miner’s 70% Stake in Kukuom Gains Traction