Aqua Power Systems Inc (OTCMKTS: APSI) is making an explosive move northbound almost reaching $0.40 this morning as the stock marches towards $0.45 highs reached in early 2021 after the custodianship was terminated and Stephen Carnes took over as controlling shareholder and was appointed as the new CEO. A break over $0.45 and its blue skies ahead for APSI which is currently under heavy accumulation by some pretty heavy hitters in small caps. Since taking over as CEO Stephen Carnes has worked hard to make ASPI an SEC filer recently filing a 10k and a 10Q as well as initiated an aggressive clean up and revamping of the overall company. In May the final piece was completed when the Circuit Court of the Ninth Judicial Circuit Orange County Florida, Granted Default Final Judgement against Tadashi Ishikawa, the old CEO declaring his 32,942,624 shares of common stock in APSI be cancelled. After the cancelation APSI was left with an OS of 17,204,180 shares giving APSI a market cap of $5 million at $0.32 per share.

Reverse merger SPACS can be more explosive than biotech’s when the incoming Company has real value but is undiscovered to investors and many RM stocks, we have covered on this website have gone from pennies to dollars. Two recent RM runners that stand out are TSNP/HMBL which went from sub pennies (where we first wrote about it) to several dollars per share. The other is HRBR which went from a few cents (where we first wrote about it) to $3 plus. APSI is an SEC filer and perfect reverse merger candidate recently filing its 10k and 10Q that showed the Company has $93,000 in the treasury and just $69,000 in total liabilities. CEO Stephen Carnes has been busy stating on twitter on July 6: “Saturday lunch meeting update: Discussed target company’s operating divisions & revenues which increased from $49mm in ’20 to $95mm in ’21 (’21 audit not yet complete) as well as plans for expansion & growth. Transaction structure discussed.  More $APSI updates as they occur. On Wednesday September 21 he tweeted: “Progress update. $APSI completing draft of Letter of Intent for acquisition (target mentioned in 7/6/22 tweet) to memorialize verbally agreed upon terms.  Upon LOI signing, Co has reporting obligation to file 8-K within 3 business days.”

Aqua Power Systems Inc (OTCMKTS: APSI) has executive offices at 2180 North Park Ave, Suite 200, Winter Park, FL 32789, which is leased to the Company by Obduro, LLC. Obduro, LLC is owned by CEO, Stephen Carnes. APSI is an SEC filer and perfect reverse merger candidate recently filing its 10k and 10Q that showed the Company has $93,000 in the treasury and just $69,000 in total liabilities.

History of the shell and how Stephan Carnes became CEO and holder of the controlling block of stock in APSI:

Custodianship: On October 19, 2020, Small Cap Compliance, LLC filed its motion to serve as custodian of the Company; it was not a shareholder of the Company on the aforementioned date.

On December 7, 2020, Small Cap Compliance, LLC filed a Certificate of Reinstatement for the Company, thereby reinstating the Company, appointed Stephen Carnes as the sole officer and director of the Company and amended the Company’s Certificate of Incorporation to authorize the issuance of one million shares of Series B preferred stock. The aforementioned were approved, and Stephen Carnes was elected as the sole director and the sole executive officer, at a meeting of the shareholders on January 4, 2021.

Receivership: On January 28, 2021, Stephen Carnes filed an application with the Eight District Court of Nevada to be appointed as the Receiver of the Company and requested that the Court Order written proof of claim from all Claimants and Creditors of the Company as a reasonable and necessary step toward rehabilitating our insolvency.

Saturday lunch meeting update: Discussed target company's operating divisions & revenues which increased from $49mm in '20 to $95mm in '21 ('21
audit not yet complete) as well as plans for expansion & growth. Transaction structure discussed. More $APSI updates as they occur.

To Find out the inside Scoop on APSI Subscribe to Microcapdaily.com Right Now by entering your Email in the box below 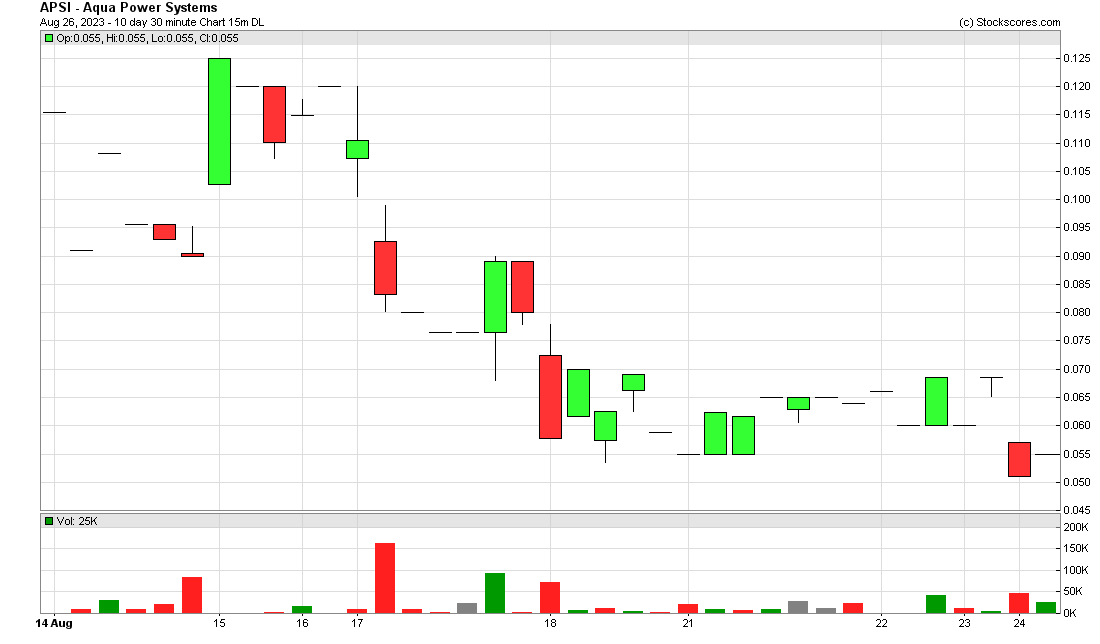 On March 1, 2021, the Eighth Judicial District Court of Nevada ordered that all claimants and creditors of the Company had sixty (60) days, from March 1, 2021, to submit written proof of claim to the receiver.

On May 3, 2021, Claimant Graham Taylor submitted claims on behalf of himself, Heng Hong Investment, and Puriwanto Handoko.

On August 5, 2021, the Eighth Judicial District Court of Nevada ordered that all claimants and creditors of the Company are barred from participating in the distribution of assets of the Company which arose on or before August 6, 2021 (Notice of entry of the Order). No appeal was filed by the claimants within the timeframe for an appeal.

In January 2021 APSI announced Stephen Carnes has recently been appointed as President and CEO of the Company. Mr. Carnes has vast experience working with publicly traded companies and within the securities industry. Under his leadership the Company will be pursuing an ambitious growth strategy in order to bring new value to the Company and shareholders.

At that time Mr. Carnes stated among other things: “In addition to the Company preparing financials for an audit in order to become a fully reporting SEC filer; the Company is also undertaking a course of action to clean up and eliminate outstanding past debt listed on the Company’s financials in its last 10-K which dates back to the 2015 annual report. As many of you may have noticed, the Company did file a form 15-D in December 2020, that was needed at that time. The Company is now ready to forge forward at this time to go thru an independent audit and after the audit is completed file Annual 10-K reports in order to return to fully reporting status”

CEO, Stephen Carnes has kept his word on all fronts and continually lowered the OS with the final share cancelation coming in an 8k on May 20 which stated:

On May 19, 2022, in the Circuit Court of the Ninth Judicial Circuit Orange County Florida, an Order Granting Default Final Judgement was filed in a cause heard on Plaintiff Aqua Power Systems Inc (“APSI”) motion for Default Judgement against Tadashi Ishikawa. The Court declared 32,942,624 shares of common stock in APSI issued to Tadashi Ishikawa currently held in book entry at VStock Transfer to be void and are hereby to be cancelled. Upon the transfer agent’s completion of the cancellation process, the total outstanding number of common shares of the company shall be reduced from 50,146,804 shares to 17,204,180 common shares outstanding.

Had a shareholder contact me & said you should tweet that $APSI share count has remained unchanged for 2 years. I replied that’s not true it’s done nothing but go down. OS was over 50mm 12/2020, now at 17mm having shaved 9mm+ free trading & 30mm+ restricted from O/S pic.twitter.com/XjqtOsfHR8

Currently trading at a $5 million market valuation APSI has just 17,204,180 shares outstanding and is a virtually debt free SEC filer. The stock is currently under heavy accumulation with some pretty big players in small caps currently on this one. As far as reverse mergers APSI has a lot of promise, according to the CEO the incoming Company revenues increased to $95 million in 2021 and once the 8k comes confirming this APSI could run into a whole new dimension. As we said a break over $0.45 and its blue skies ahead for APSI. We covered TSNP /HMBL at $0.003 and HRBR at $0.03 so we know all about how explosive reverse merger plays can be when the incoming Company has real value as Air Wisconsin did on HRBR or a reverse merger specialist behind it as was the case with HMBL.Microcapdaily will be covering APSI as it happens so make sure you subscribe to Microcapdaily right now so you don’t miss it.

Disclosure: we hold no position in APSI either long or short and we have not been compensated for this article.