Asia Broadband (OTCMKTS: AABB) is breaking out northbound in recent trading rocketing up over $0.08 last Wednesday on $2.4 million in dollar volume and hitting $0.09 briefly Thursday Morning. AABB was one of the biggest runners of 2021 skyrocketing to highs of $0.659 per share in February before coming back down, hitting a dime and then rocketing back up to $0.60. More recently we reported on AABB as the stock ran from well under a dime to $0.33 highs. Currently trending northbound AABB is under heavy accumulation with more buyers than sellers at current levels. AABB is among the most exciting stocks in small caps with an enormous investor following including some of the most powerful players in small caps who are looking for a return to previous highs. Asia broadband’s mining property acquisition strategy is to optimize development capital utilization by focusing operations in regions of Mexico where AABB has a comparative advantage of development resources and expertise. In 2021, the Company acquired two high potential gold property interests in Mexico, the Bonanza Gold Mine Project and the Tequila Gold Mine Joint Venture. Gold production from the Tequila property could be coming soon is expected. We have previously reported on the Company’s sale of its mining operations in the Guerrero Gold Belt (GGB), Mexico, that netted them $82 million, which has funded the current move into crypto. AABB currently has $67.9 million $USD in the treasury according to the most recent OTC disclosure on May 11.

AABB launched its cryptocurrency exchange within the AABB Wallet last December in collaboration with the Company’s digital assets developer. Asia Broadband’s gold-backed ERC-20 token called AABB Gold Token (AABBG) can be traded within the AABB Wallet where users can also send and receive emails and text messages. The AABB Gold token is backed by Asia Broadband’s physical gold reserves; $30 million in gold bullion. Each AABBG token is pegged to 0.1 gram of gold, giving investors the security of gold and convenience of cryptocurrencies. AABB’s primary goal for the AABBG token is to become a worldwide standard of exchange that is secured and trusted with gold backing, by progressively expanding token circulation to the primary sales markets of North America and Europe and expand globally to other predominant and high growth market areas. In recent news Asia Broadband’s BOD approved two shareholders stock dividends. AABB with its $67.9 million in the treasury can certainly afford it. According to the Company the restricted common share dividend will be distributed on the basis of 1 dividend share for every 100 common shares owned to shareholders of record or beneficial owners of the Company on September 15, 2022. The majority of shareholders will receive the dividend shares through their brokers or investment firms. Alternatively, shareholders that own registered share certificates with the Company’s transfer agent will receive the dividend shares directly by mail.

Asia Broadband (OTCMKTS: AABB) is a resource company focused on the production, supply and sale of precious and base metals, primarily to Asian markets. The Company utilizes its specific geographic expertise, experience and extensive industry contacts to facilitate its innovative distribution process from the production and supply of precious and base metals in Mexico to client sales networks in Asia. This vertical integration approach to sales transactions is the unique strength of AABB that differentiates the Company and creates distinctive value for shareholders. Additionally, the Company has added a digital assets business segment and released its AABBG freshly minted mine-to-token gold-backed cryptocurrency within its AABB Wallet and a proprietary digital exchange AABBExchange. AABB expects its token to become a world-wide standard of exchange that is stable, secured and trusted with gold backing, while having the added benefit of demand-based price appreciation. These are unique and outstanding qualities relative to other cryptocurrencies.

Asia broadband completed the sale of its mining operations in the Guerrero Gold Belt (GGB), Mexico, for $82 million, and the Company has used these resources to fund the launch of its new ERC-20 token. Currently AABB has $70,945,697 in the treasury which sets the Company above 99.9% of the exchange. Additionally, the Company has recently released its AABBG freshly minted mine-to-token gold-backed cryptocurrency backed 100% by $30 million in physical gold held by the Company in several high security, private locations in Mexico. AABB vision for its token it to become a world-wide standard of exchange that is stable, secured and trusted with gold backing, while having the added benefit of demand-based price appreciation. These are unique and outstanding qualities relative to other cryptocurrencies.

The unique strength of Asia Broadband that differentiates the Company from competitors, and generates distinctive value for shareholders, is the vertical integration approach to sales transactions. With the launch of AABB Gold, a newly minted ERC-20 gold-backed token, and with the launch of AABB Wallet, Asia Broadband expects to become a world leader in providing a standard of exchange that is of excellent quality, is secure, transparent, trusted, and backed by gold. 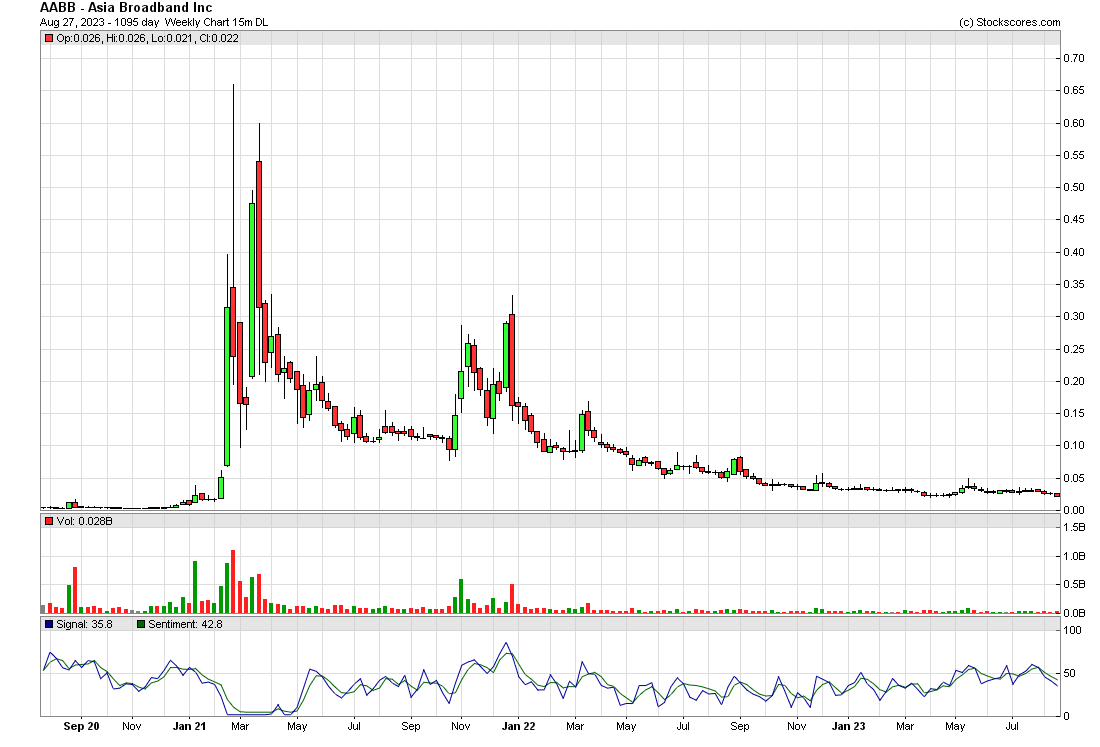 In June the Company said it is expecting the completion of the geological technical report this month for its Bonanza Gold Mine Project located the Acaponeta area of Nayarit, Mexico. The report is currently in the final stages of completion by a qualified professional person. The Company was expecting the Bonanza report to be delivered last month, but its completion was delayed intentionally to allow for the further exploration of strong mineral indications that were discovered near the time of planned submission of the drill cores. The AABB geological and mining operations team will utilize the report to plan the production and exploration expansion of the Bonanza concession. The Bonanza gold project is a prospective high yield mining asset in the Company’s strategic initiative to increase gold production and AABB’s physical gold holdings. Located in the prolific mining region of Acaponeta in Nayarit, Mexico, the Bonanza property has shown high-grade gold assay results from recent samples and drilling activities with the most significant gold values of more than 10 grams per ton (g/t). Company management is excited by the Bonanza project for its potential for rapid expansion, high production, low operating costs and strong contribution to gross profits. Subsequent to receiving the Bonanza report, the Company is also expecting the completed geological technical report by a qualified professional person for its Tequila gold mine project in Mexico.

AABB continues to implement its mining property acquisition strategy to optimize development capital utilization by focusing operations in regions of Mexico where AABB has a comparative advantage of development resources and expertise readily available for rapid expansion and duplication of the Company’s previous gold production success.

CEO Chris Torres stated: “Our management and mining group are highly anticipating the professional report for our Bonanza gold project to allow us to accelerate our expansion and development plans for the property. It was great to see that there were many exciting mineral resource indications throughout the process of data gathering for the report. In a similar scenario to Bonanza, we are also expecting the Tequila property report in the weeks to follow receiving the Bonanza assessment.”

AABB is on the move northbound in recent trading moving steadily northbound on growing volume topping $250,000 in dollar volume on Friday. At current levels there are more buyers than sellers. AABB was one of the biggest runners of 2021 skyrocketing to highs of $0.659 per share in February before coming back down, hitting a dime and then rocketing back up to $0.60. AABB is an exciting story developing in small caps and is under heavy accumulation at current levels. With $67.9 million in the treasury and $30 million in gold bullion backing its ERC-20 token; AABB Gold Token (AABBG) it’s easy to see why many investors see Asia Broadband as a diamond in the rough. According to the Company’s latest OTC disclosure in May they have over $100 million in assets and are virtually debt free with less than $1 million in liabilities. Currently trading at a $170 million market valuation AABB has 2,493,944,690 shares outstanding and is maxed out and cannot issue any more stock until they raise the AS which takes time. Currently there are 1,801,532,510 shares in the float. We will be updating on AABB when more details emerge so make sure you are subscribed to Microcapdaily.