ImagineAR Inc (OTCMKTS: IPNFF) is on the move in recent days and investors are looking for a return to previous recent highs of $0.365. The stock is a volume leader in small caps and has quickly attracted a significant shareholder base.

ImagineAR is an emerging player in the booming augmented and virtual reality (AR/VR) market forecasted to hit 18.8 billion U.S. dollars in 2020 and is expected to expand drastically in the coming years. Consumer spending made up the single largest portion of the AR/VR market worldwide, followed by the discrete manufacturing segment, both of which accounted for billions of U.S. dollars in sales.

ImagineAR Inc (OTCMKTS: IPNFF) is an “AR-as-a-Service” platform for desktops that enables businesses of any size to create and implement their own AR campaigns with no programming or technology experience. Every organization, from professional sports franchises to small retailers, can develop interactive AR campaigns that blend the real and digital worlds using ImagineAR™. Customers simply point their mobile device at logos, signs, buildings, products, landmarks and more to instantly engage videos, information, advertisements, coupons, 3D holograms and any interactive content all hosted in the cloud and managed using a menu-driven portal. Integrated real-time analytics means that all customer interaction is tracked and measured in real-time.

After activating AR Campaign with ImagineAR.com, consumers download & use the ImagineAR™ mobile app to experience it. But ImagineAR™ does WAY more than just activate and visualize AR. ImagineAR™ delivers AR Scavenger Hunts, Sweepstakes, Rewards, Coupons, e-digital cards, and more. Companies can integrate the ImagineAR™ platform with their existing mobile app. Larger companies and brands, who have significantly invested in their mobile app, can instantly create AR immersive campaigns to further expand consumer usage, activation, and downloads. These products will be available through an annual license agreement from the company.

Recently the Company launched a new Experience Design & Development studio that will collaborate with brands to create custom “no app download required” experiences for Snapchat, Facebook and Mobile-Browser Augmented Reality (AR) experiences. ImagineAR™ has assembled a team of technically savvy imaginative experience designers and developers who specialize in AR experiences. Their expertise will lend to expanding the breadth and potential of creating custom and engaging brand and content experiences that bolster campaigns across platforms, including Snapchat and Facebook.

To Find out the inside Scoop on ImagineAR Subscribe to Microcapdaily.com Right Now by entering your Email in the box below 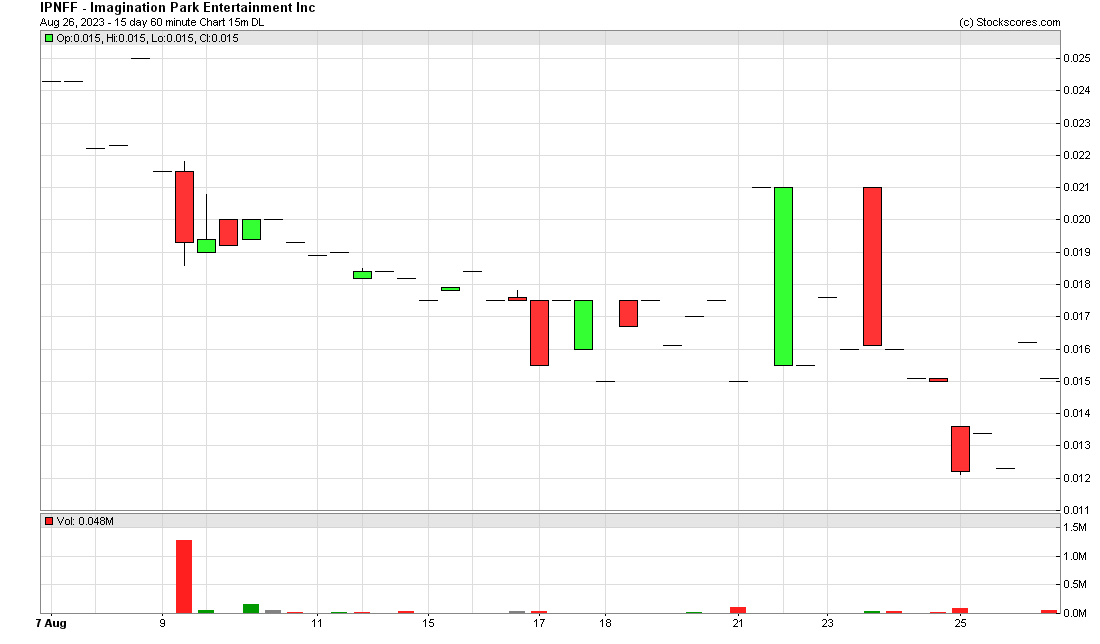 ImagineAR has been busy; the Company signed 5 year agreement with the NFL Alumni Association Academy to provide its Augmented Reality Platform for the launch of their new NFLA mobile interactive products.  This agreement provides for equal program revenue sharing over the 5-year term. Imagine AR also signed a two year partnership agreement with Valencia C.F., one of the biggest soccer clubs in the world and the winner of six LaLiga titles, to provide its Augmented Reality Platform for fan activation and engagement.  This historic agreement makes Valencia C.F. the first LaLiga team to incorporate Augmented Reality for fan activation and engagement the Company reported the signing of a reseller agreement with Sticky Media, a digital and physical sign manufacturer based in Montreal, Canada with over 1500 clients in the last 15 years including Psycho Bunny, Vans , Dominos, and Pajar.

On October 21 INPFF announced its first-ever mobile WebAR Retail Project launching in December 2020.  This is a new product offering for ImagineAR and first commercial agreement to provide ‘non-app’ augmented reality experiences for a major retail campaign program using 3D models. Consumers will experience augmented reality using their mobile phone cameras without downloading an app in a retail environment. According to Statista, The WebAR Global Marketplace is expected to reach $198 Billion USD by 2025.

“This is a major milestone for ImagineAR to deliver a WebAR retail experience revenue project”, said Alen Paul Silverrstieen, CEO of ImagineAR.  “This will be a keystone AR campaign and we expect it to create new prospects and client opportunities in today’s challenging Covid-19 environment.”

Currently on the move ImagineAR has established itself as a top most traded stocks in small caps regularly topping $3 million in dollar volume. The Company is making moves; In June ImagineAR reported the signing of a partnership with North Highland,  a top ranked global consulting firm with over 5,000 consultants and 70 offices around the world. North Highland was ranked on the Forbes 2020 America’s Best Management Consulting Firms list, placing in seven categories, including one of only 31 firms ranked for Internet, Media and Entertainment. ImagineAR is an emerging player in the booming augmented and virtual reality (AR/VR) market forecasted to hit 18.8 billion U.S. dollars in 2020 and is expected to expand drastically in the coming years. Consumer spending made up the single largest portion of the AR/VR market worldwide, followed by the discrete manufacturing segment, both of which accounted for billions of U.S. dollars in sales. We will be updating on ImagineAR when more details emerge so make sure you are subscribed to Microcapdaily so you know what’s going on with ImagineAR.

Disclosure: we hold no position in ImagineAR either long or short and we have not been compensated for this article