Asia Broadband (OTCMKTS: AABB) is sitting just below $0.10 support levels which it has held numerous times over the past year with the lowest dip at $0.077. While the overall markets have seen huge losses in recent days AABB has held its ground with sellers drying up at current levels. To the upside AABB has a long history of big moves; multiple runs over $0.25 including its biggest run to $0.659 per share in early 2021 and another run to $0.3336 last December. With ready liquidity and a significant international shareholder base AABB could move quickly on any new catalyst. We have previously reported on Asia broadband many times before and as we have said, what sets this Company apart from the rest (on this exchange) is their $82 million sale in the Guerrero Gold Belt (GGB), Mexico which means this Company is very well funded with a significant war chest available to them to start any business they want. There continues to be a growing list of detractors who suggest the Company does not have the $68.4 million in the treasury as they claim, one thing Asia broadband management could do would be to become an SEC filer and fully reporting OTCQB with audited financial statements. This would go a long way to silence the doubters and the Company could command a significantly higher stock price.

Since the sale of its mining operations in the Guerrero Gold Belt (GGB), Mexico, for $82 million, the Company moved into the booming crypto space with the launch of its new ERC-20 token; the AABB Gold token. The Company also launched the AABB Walet followed by the AABB Crypto Exchange.  The Company has also expanded into the NFT space and is currently in discussions to create multiple NFT marketplaces for unique digital content categories. Asia broadband is also developing a new product called PayAABB. It is a payment gateway for merchants to accept crypto payments and is expected to launch in June. Besides the $68.4 million in the treasury Asia broadbands most recently filing shows $30 million in gold bullion backing its ERC-20 token; the AABB Gold token and a total of $107 million in assets. In April the Company began production on its mining property in the Tequila region of Mexico. The processing mill on site is currently operating at 50 tons per day (tpd) maximum capacity and a retrofit upgrade program is underway to increase production capacity to 100 tpd. Additionally, the Company is planning a large-scale expansion of its production and processing facilities to begin installation sometime this year. More recently in a strong vote of confidence from management, CEO, Chris Torres invested $2.4 million into the Company, along with four directors of Asia broadband who invested another $400,000 for a total of $2.8 million total.

Asia Broadband Inc. (OTC: AABB) is a resource company focused on the production, supply and sale of precious and base metals, primarily to Asian markets. The Company utilizes its specific geographic expertise, experience and extensive industry contacts to facilitate its innovative distribution process from the production and supply of precious and base metals in Mexico to client sales networks in Asia. This vertical integration approach to sales transactions is the unique strength of AABB that differentiates the Company and creates distinctive value for shareholders. Additionally, the Company has added a digital assets business segment and released its AABBG freshly minted mine-to-token gold-backed cryptocurrency within its AABB Wallet and a proprietary digital exchange AABBExchange. AABB expects its token to become a world-wide standard of exchange that is stable, secured and trusted with gold backing, while having the added benefit of demand-based price appreciation. These are unique and outstanding qualities relative to other cryptocurrencies. As we have reported previously: AABB completed the sale of its mining operations in the Guerrero Gold Belt (GGB), Mexico, for $82 million, and the Company has used these resources to fund the launch of its new ERC-20 token. Currently AABB has $68.4 million in the treasury which sets the Company above 99.9% of the exchange. AABB just filed an annual report on March 22 showing the are debt free and hold over $30 million in Gold Bullion. Asia Broadband recently released its AABBG freshly minted mine-to-token gold-backed cryptocurrency backed 100% by $30 million in physical gold held by the Company in several high security, private locations in Mexico. AABB vision for its token it to become a world-wide standard of exchange that is stable, secured and trusted with gold backing, while having the added benefit of demand-based price appreciation. These are unique and outstanding qualities relative to other cryptocurrencies. 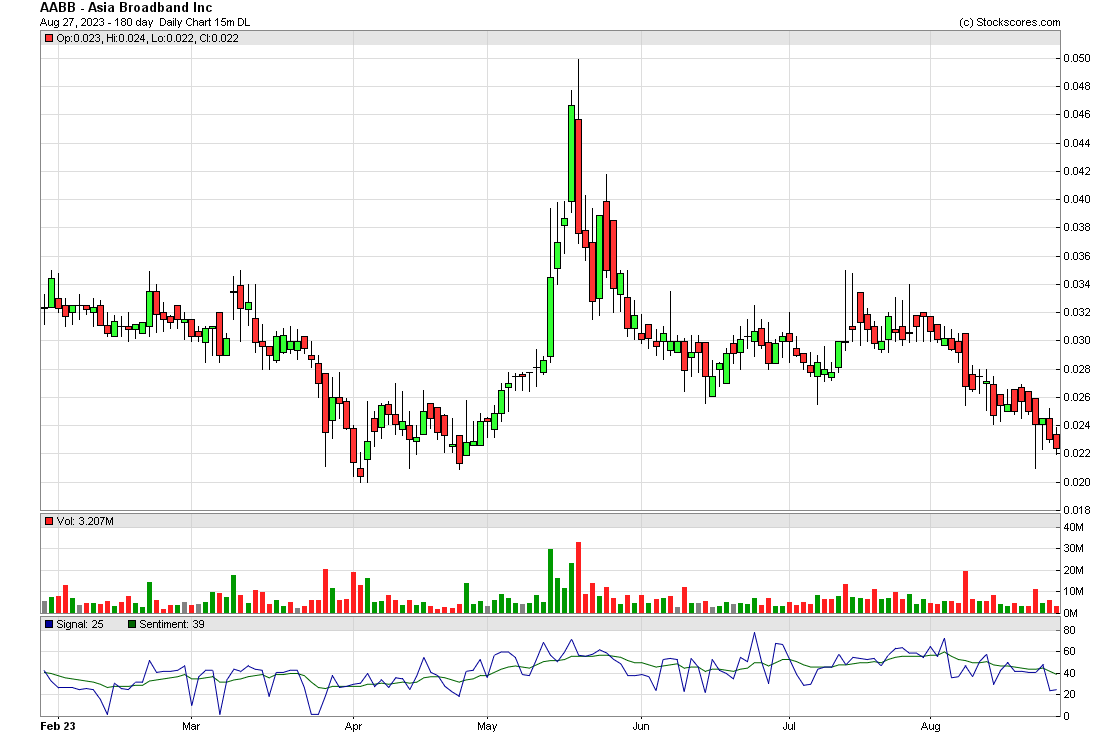 Asia broadbands gold-backed AABBG token and the Exchange, embraces a pioneering philosophy with its truly unique Mine-to-Token vertical integration operational approach that strives toward cryptocurrency only exchanges and complete independence from FIAT currency. The numerous and complex mechanisms of the Exchange are evolving rapidly within a live environment. In the coming weeks, the Company expects to have trading algorithms optimized to facilitate 200 plus cryptocurrency Exchange trading pairs on the BCGateway platform and have the enhanced mobile Exchange apps available. Additionally, AABB is planning to launch an international marketing campaign for the Exchange and AABBG token expected to begin next month. On April 26, Company President and CEO, Chris Torres invested $2.4 million into the Company, along with four directors of the Company who invested another $400,000 for a total of $2.8 million. A total of 28 million non-convertible, preferred shares were issued at the par value of $0.10 per share with each share having 100 voting rights and equal participation with common shares for all future dividends. The entire $2.8 million share sale proceeds will be allocated to the Company’s capital expansion programs.

AABB continues to implement its mining production and acquisition strategy to optimize capital utilization by focusing operations in regions of Mexico where AABB has a comparative advantage of development resources and expertise available for accelerated expansion and duplication of the Company’s previous gold production success. Additionally, the Company’s digital asset division that includes the AABBG cryptocurrency token, AABB Wallet, AABB Exchange and NFT’s continues to develop and expand rapidly into 2022.

Chris Torres said at the time: “Our entire management team is committed to the Company’s growth and profitability and we have emphatically demonstrated this with a substantial long-term investment to fuel the expansion of our gold production and digital asset divisions. Our focus and determination to succeed in every area of the Company’s business has intensified now with our capital contribution”, affirmed Chris Torres, AABB President and CEO.

Currently trading at a $232 million market valuation AABB has 2,468,944,690 shares outstanding which is almost maxed out with the AS set at 2. 5 billion. The Company has an outstanding looking balance sheet, probably the best on the entire OTCQB with $107 million in assets which includes $68 million in cash and $30 million in Gold Bullion and just $700,000 in total liabilities. They also inked $ 2,765,812 in revenues during 2021, not a bad first year in crytpo. AABB is among the most exciting stocks in small caps with an enormous investors following including some of the most powerful players in small caps. Currently trading right at $0.10 support level with a documented history of making significant moves to the north from this level including separate runs to $0.659 and $0.33 respectively AABB is on many traders watch lists who will jump on board on any significant move to the upside.  We will be updating on AABB when more details emerge so make sure you are subscribed to Microcapdaily so you know what’s going on with AABB.