Ggtoor Inc (OTCMKTS: GTOR) is making an explosive move up the charts after the Thomasville, Georgia, eSports up and comer reported it has successfully closed a deal valued at $102,300,000. The Company believes this is the largest virtual land purchase in history surpassing a publicly announced purchase of $5,000,000 just two weeks ago. The combined parcels will be GGTOORCITY the first ever virtual city devoted to entertainment. When sold out the Company envisions hundreds of businesses in sports, music, gaming, movies, theater, dance, amusement parks, retail, concessions, all making up a virtual city where millions of daily visitors will work and play.

The Company will be building an eSports Arena that will become one of the focal points of GGTOORCITY. Certain and specific parcels will go on sale Tuesday, June 14, 2022, at 9:00 AM EST with prices ranging from $375,000 to $28,000,000 per parcel. The less expensive city parcels with prices starting at $8,400 will be released for sale at a future date. Ggtoor also reported it will be holding a worldwide Zoom Call and all interested persons are encouraged to join the call. The Company’s CEO, John V. Whitman Jr., will be sharing details on the purchase along with disclosing what Metaverse GGTOORCITY will be a part of. The Zoom Call will be held June 14, 2022, at 9:00 AM EST. To enter the call please use the following coordinates; Meeting ID: 731 9683 4888, Passcode: Uk5N0Z https://us04web.zoom.us/j/73196834888?pwd=RgmLUh1B6MOPswoeQGwk7yPMgoI8NR.1

Ggtoor Inc (OTCMKTS: GTOR) is is an emerging leader in the eSports, youth sports, and family sports entertainment markets, a rapidly growing force in the global eSports space. The Company has expanded its Tournament Schedule in calendar Q4 2020 with the launch of its new Open Platform model, where users can establish and manage Shadow Gaming sponsored eSports events, with event organizers working to help boost the revenue stream generated by membership fees, advertising, ambassador program, studios, and the Shadow Gaming proprietary platform. Ggtoor, through its wholly owned subsidiary, Shadow Gaming, Inc., has aggressively entered the eSports market. In addition, the company plans on operating several subsidiary companies from high tech data management businesses to product and support businesses

Microcapdaily was one of the first to report on GTOR on May 23 when GTOR was $0.015 in our article: “Ggtoor Inc (OTCMKTS: GTOR) Under Accumulation as eSports Co Sees Rapid Growth and Coming Deal“

We reported: Ggtoor Inc (OTCMKTS: GTOR) is under accumulation and moving higher in recent trading as volume picks up too and penny stock speculators jump on board. Ggtoor operates in the exciting eSports space and is experiencing rapid growth recently reporting the Company is on its way to a a record-breaking month. This week, the Apex Legends event kicked off a special 24-hour stream that drew over 10,000 unique viewers, the Yu-Gi-Oh. The stock has a very favorable share structure with just 209 million shares outstanding, 100 million of which are restricted leaving just 108 million free trading shares valued at a little over $2 million. GTOR does have a history of big moves and made a historic run in 2020 to over $1.25, since than the stock has had 2 more runs both in 2021, the first to $0.24 and the last one to $0.1638 highs. With a history like that it’s easy to get excited about GTOR currently trading near its historical lows. While the Company has little assets, they also have little debt of $700k. Revenues so far have been minimal at least as reported in the last OTC disclosure. Ggtoor has also submitted an LOI on a 15 million restricted share metaverse deal that management suggests may bring some more revenues to the Company.

To Find out the inside Scoop on GTOR Subscribe to Microcapdaily.com Right Now by entering your Email in the box below 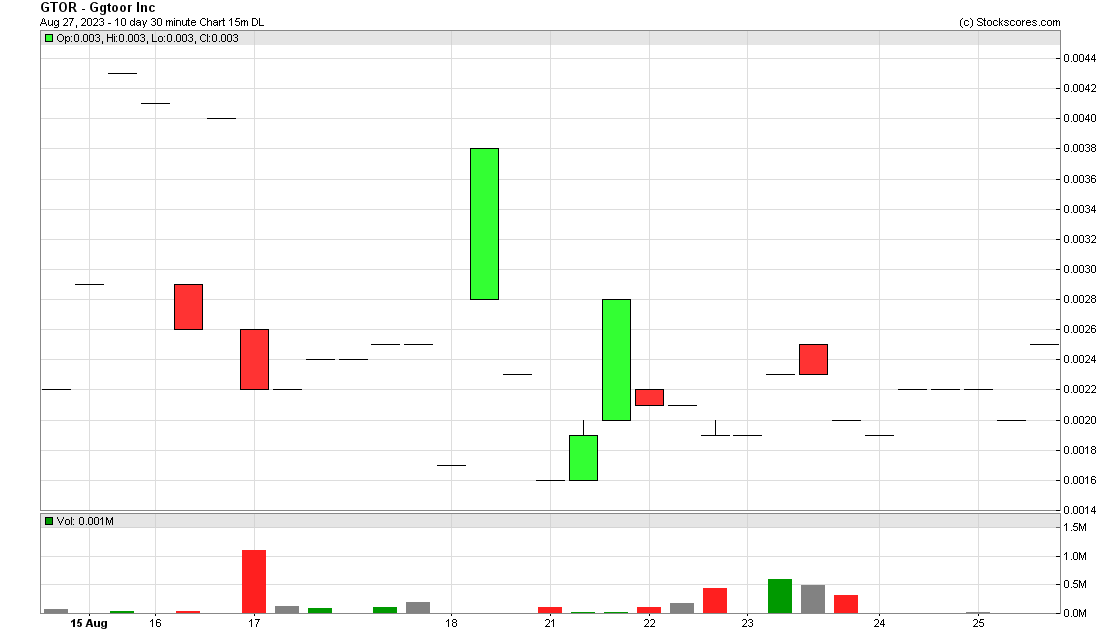 John V. Whitman Jr, the Company’s CEO owns 95.9 million shares representing 49.2% of the Company. Over the past 24 years, John has successfully raised just over 400 million dollars for public & private companies including over 20 million for his own public companies.  John has extensive financial contacts and is extremely well versed with SEC compliance issues and Sarbanes Oxley.  Over the past several years John has assisted 7 companies to go public directly and another 10 indirectly, raise capital and maintain compliance.

There are now dozens of eSports event’s sponsored by GGToor, with great prize pools. Whilst many of these events can be found at https://ggtoor.com/tournaments with an average of eighteen events a month we are one of the platforms that have this many events every month. The Company has events in deferment categories such as First Person Shooter, Multiplayer Online Battle Arena (MOBA). Real-Time Strategy (RTS), Fighting, Sports, Card Games, Battle Royal, and a few more than the traditional e-sports genres, but have been very successful and popular with gamers.

GTOR continues to see record growth: Another month, more records broken! This time, the Company reached new heights on Unique Twitch Viewership, tallying over 39,000 different people tuning in to watch one of our events during the course of May as the action unfolded live, and the number of tournaments hosted by GGTOOR was its largest count yet for a single month. May also saw a 39% increase in total player registrations compared to April, with over 1,600 new players competing in one of our events for their very first time, joining thousands of others that returned to play with us once again.

Tons of room to run in next month. #nft #Solana #Metaverse $btc https://t.co/B81HiofjGg

Currently trading at a $9.4 million market valuation, GTOR has just $700k in total liabilities and trades and a low market valuation with just over $2 million in free trading shares. GTOR is making a major move northbound after the Company closed a metaverse deal valued at $102,300,000. The combined parcels will be GGTOORCITY the first ever virtual city devoted to entertainment. When sold out the Company envisions hundreds of businesses in sports, music, gaming, movies, theater, dance, amusement parks, retail, concessions, all making up a virtual city where millions of daily visitors will work and play. GTOR continues to see record growth along all channels recently reporting a 39% increase in total player registrations in May compared to April. Microcapdaily was one of the first to report on GTOR on May 23 when GTOR was $0.015 in our article: “Ggtoor Inc (OTCMKTS: GTOR) Under Accumulation as eSports Co Sees Rapid Growth and Coming Deal“ For more on GTOR subscribe to Microcapdialy right now. We will be updating on this stock.

Disclosure: we hold no position in GTOR either long or short and we have not been compensated for this article.