Good Vibrations Shoes Inc. (OTCMKTS: GVSI) was up last week in choppy waters, the third member of the trifecta has a lot of believers and has formed a solid base just under the $0.01 mark. GVSI took off like a rocket back in April 2021 after RM Whizz George Sharp stated on twitter on April 19 his lawyers were filing for custodianship of GVSI. We wrote about GVSI on April 25 just as things were heating up stating at the time: “Mr. Sharp recently gained fame on the historic TSNP rise from triple zeroes to multi dollars trading hundreds of millions in dollar volume per day. GVSI currently has good liquidity and some top traders in small caps behind it.

Reverse mergers can be more explosive than biotech’s when the incoming Company has real value but is undiscovered to investors and many RM stocks that we have covered on this website have gone from pennies to dollars. Unlike the two others members of the trifecta GVSI has had trouble making gains and has been stagnant at just under $0.01. It has attracted a lot of bashers and naysayers because things have not progressed as fast as the others, this is does not mean, however that GVSI is a no go, not by a long shot, some tickers are just more complicated than others. Bashers have bought up EVLI as a way to sully GS name however GS may have mentioned EVLI on twitter but there was never an 8k filed and he is not the CEO like he is on GVSI and the who other members of the trifecta who are listed on his twitter account. Because of this GVSI represents the highest risk reward of the trifecta, when a FORM 10 is filed and GVSI goes pink current as GS says they will GVSI could rocket into a whole new dimension just like GOFF did.

Good Vibrations Shoes Inc. (OTCMKTS: GVSI) is a Nevada corporation, was formerly known as Bitcoin Collect, Inc., Solpower Corp., Virtual Technologies, Inc. and Dynafuel Corporation, which was incorporated under the laws of the State of Utah on June 7, 1982. The Company is a perfect reverse merger candidate with a clean balance sheet of just $250k in liabilities. According to the 8k filed on September 20, 2021: On May 4, 2021, George Sharp was appointed as custodian for the registrant by Order Granting Emergency Motion for Appointment of Custodian Pursuant to NRS78.347 And for Temporary Restraining Order and Mandatory Injunctive Relief (Case No. CV21-00710) issued by the Second Judicial District Court of the State of Nevada in and for Washoe County (the “Court Order”). Under his authority as Custodian George Sharp appointed himself as the sole member of the Board and President, Secretary and Treasurer of the Company by resolutions of the registrant’s Board of Directors on May 4, 2021. On August 29, 2021, in recognition of the $50,000 cash invested and $50,000 in consulting fees accrued by George Sharp for professional and regulatory fees to reinstate the registrant in the State of Nevada and to have the registrant become current in its filings under the SEC’s recently imposed requirements for public companies operating under SEC Rule 15c2-11, the Board issued 300,000 shares of the authorized “blank check” preferred stock to George Sharp with 10,000 votes for each share of preferred stock to give voting control to Mr. Sharp. The registrant has engaged an auditor, as stated above, to prepare the necessary filings with the SEC to have the registrant be subject to the reporting requirements of the SEC, including the filing of annual and quarterly financial reports.

And $SRNW was easy compared to $GVSI but still took 7 months. Like I said before, it takes as long as it takes https://t.co/mcoCX8x8aI

To Find out the inside Scoop on GVSI Subscribe to Microcapdaily.com Right Now by entering your Email in the box below 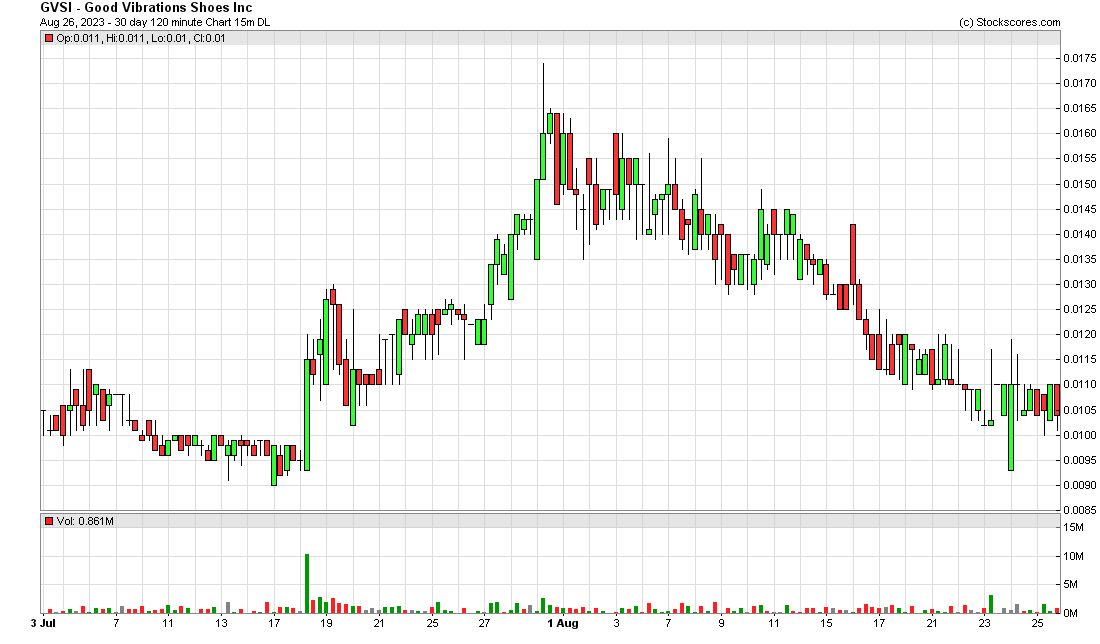 In the case of GVSI what has held things up is according to GVSI own twitter: During the SEC review it was discovered that the designation of a class of pref shares issued by $GV*I’s previous management is missing… On the SEC’s advice, management has decided to withdraw the Form 10 and refile in December so that corrections can be made with the Nevada SOS.

As everyone knows George Sharp is the stock whizz behind some of the biggest runners in recent penny stocks history including the great TSNP and FORW which also went from under a penny to $1 plus. George Sharp has, for the past 17 years, served as a consultant to companies in a variety of contexts, including software development, assisting public companies with growth and regulatory compliance plans. In June 2017, Mr. Sharp was engaged as a consultant by OTC Markets Group, Inc. to develop compliance processes to bring more timely and actionable data to the OTC market. Having worked with OTCMarkets Group as a consultant for a number of years obviously gives GS a huge advantage and if anyone can make things happen with GVSI it is George Sharp.

Microcapdaily first covered GVSI April 25 as it was surpassing the $0.01 mark pointing out at the time: “The Company is a perfect reverse merger candidate with a clean balance sheet of just $250k in liabilities.”

GVSI represents the highest risk reward of the trifecta, Unlike the two others members of the trifecta GVSI has had trouble making gains and has been stagnant at just under $0.01. With the lack of anything new many investors became impatient and sold and still GVSI has maintained support levels over $0.009. These things take time, TSNP took a long, long time and GVSI will be all the more exciting when a form 10 is filed. As previously stated, Mr. Sharp was engaged as a consultant by OTC Markets Group, Inc. to develop compliance processes so if anyone can get it done, he can. Mr. Sharp continues to regularly tweet about GVSI and it’s listed at the top of his twitter account with the rest of the trifecta. Last week he was tweeting about GVSI and compared it to SRNW. All the uncertainty and bashing has created a special situation for the 3rd member of the trifecta; it currently trades under $0.01 while the other members are at $0.57 and $1.31 and if things happen here as GS says they will this will be one seriously parabolic situation with massive upside. There are no guarantees on the OTC and no sure thing at all, GVSI is a lottery ticket for sure, but considering GS track record and the fact that he posted about GVSI at the end of the last week I would say this is a good ticket. We will be updating on GVSI when more details emerge so make sure you are subscribed to Microcapdaily so you know what’s going on with GVSI.

Disclosure: we hold no position in GVSI either long or short and we have not been compensated for this article