It’s easy to get excited about GMPR which traded as high as $0.148 last September. Currently coming off a reversal off $0.0083 52 week lows the stock has a lot of room to grow from these levels. The Company is starting to see some solid revenues too recently reporting $261,071 in sales for the 3 months ended March 31, 2022.

Gourmet Provisions International (OTCMKTS: GMPR) brought on Jack Brewer as GMPR’s Brand Ambassador & Brewer Media & Entertainment Group in October of 2017. Brewer Media Group was brought on to help build all aspects of the many Gourmet brands. With a primary focus on the increase of online and retail sales, social media presence and overall content, public persona and awareness, acquire acquisition opportunities and much more.

Black Rock Bar & Grill opened its doors and brought with it a dining experience unlike any other. By pairing family recipes, a 755-degree volcanic stone, and a love for food, the Morganroth family knew they were a perfect fit for the restaurant industry; however, they had no prior restaurant experience, working only off their dream of what Black Rock could become. With a very determined family and help from the community, Black Rock grew into something remarkable. Voted the #1 steakhouse in Michigan for three consecutive years, the family in 2013 entered a nationwide competition to be named “America’s Next Top Restaurant Franchise” and won first place! Today, Black Rock is expanding across the nation. We are home grown, and soon to be nationally known.

Jose Madrid Salsa “The Healthy Fundraiser” has continued to dominate in the fundraising category, expanded its Ohio offices & production facility, recently purchased a custom delivery vehicle and will be expanding into many retail outlets throughout the US & Canada, now in 160+ grocery stores throughout Ohio.

Pizza Fusion Gourmet Provisions International Corp. acquired the multi award-winning Pizza Fusion brand, with existing locations in the US & Saudi Arabia, in March, 2019. In 2006, Pizza Fusion changed the pizza industry with its award-winning organic, gluten-free delicious healthy pizzas, with a big emphasis on every product and location keeping to the company’s motto ‘Saving the Earth one Pizza at a Time!’ Now selling its Gourmet Gluten-Free Frozen Pizzas in 175+ grocery stores in 4 different states.

PopsyCakes “The First & Only Cupcake on a Pretzel” debuted their new PopsyBites on Fox News Channel’s popular show “The Five” and the new bite size gourmet treat has been a big hit ever since in retail. The company signed a 50/50 partnership deal with a Pittsburgh based $16 million annual Candy Company that can handle nationwide production and distribution (more details being announced soon).

To Find out the inside Scoop on GMPR Subscribe to Microcapdaily.com Right Now by entering your Email in the box below 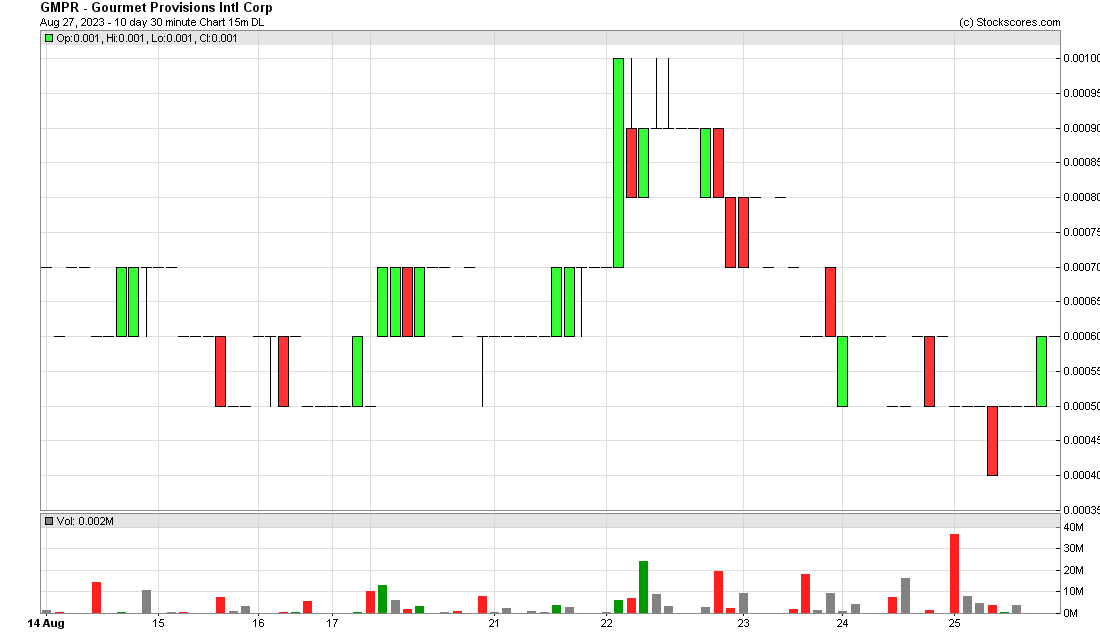 GMPR Wholly Owned Subsidiary Jose Madrid Salsa currently has their 28 Gourmet Salas in 100+ Grocery, Convenience & Liquor Stores throughout Ohio. JMS started selling its Gourmet Salsas in 1993 and quickly established the brand as the #1 Salsa Fundraiser nationwide. Currently JMS continues to lead the industry in fundraising and over the past couple of years has been taking a larger presence into the retail marketplace. Gourmet Provisions International Corporation purchased 100% of Jose Madrid Salsa 8 years ago and it is owned and operated as a wholly owned subsidiary of GMPR.

Happy Fourth of July to all! May this day be a symbol of peace, prosperity, and happiness in your lives. God bless America and the people who live here!https://t.co/VLkebJGahS#OTCMarkets #StockMarket #GMPR #july4th #independenceday #4thofjuly #fireworks #america #fourthofjuly pic.twitter.com/zmVxaaa4NQ

Currently trading at a $2 million market valuation GMPR has just 133,970,018 shares outstanding out of 275 million authorized with a tiny float of 74,221,333 shares. GMPR is an exciting story developing in small caps, with recent highs of $0.148 the Company is virtually debt free with just $45k in liabilities. Already doing solid revenues the Company is making big moves recently reporting on twitter: there is news coming out next week; Black Rock deal; Military & our Pizza Fusion frozen pizzas; CFO & Audits for NASDAQ; Salsa into new distributor; New #CousinTs products; new website; food show, great things happening, slow & steady as we build this great food company. $GMPR” We will be updating on GMPR when more details emerge so make sure you are subscribed to Microcapdaily so you know what’s going on with GMPR.

Disclosure: we hold no position in GMPR either long or short and we have not been compensated for this article.