Innovative Payment Solutions Inc (OTCMKTS: IPSI) is a low float digital payment solution targeting the $100 billion payment remittance market that is quickly climbing up the charts and getting noticed by investors. Currently trading at a $12 million market valuation the stock ran to $0.36 in February 2021 with virtually the same share structure as it has today. IPSI is an SEC filer and fully reporting OTCQB with little debt and $3.6 million in the treasury. During early May the stock dropped below the $0.01 mark and there was over 10 million sold there as the seller that had driven the stock down from its 2021 highs sold the rest of their position. Since than IPSI has bene moving steadily northbound as there are buyers and no sellers. As volume has picked up substantially in recent days the stock is starting to see some explosive moves to the upside running 43% on Friday alone, a day when the DOW was down over 880 points.

While the Company has been slow on press recently in April, they announced the second-phase launch of the IPSIPay App following approval from VISA® for use of its debit card services as part of IPSIPay. Following the initial launch of IPSIPay in December 2021, the availability of VISA debit card capability as part of IPSIPay enhances IPSIPay’s positioning as an attractive mobile banking solution for IPSI’s initial target market — the large and growing unbanked, under banked and money remittance market worth $50 billion just between US and Mexico. The IPSIPay app provides a cheaper, faster, secure and more convenient. Users can use the App to send wallet to wallet transactions and load money to VISA Debit cards, enabling customers to access funds through ATMs as well the hundreds of thousands of businesses that accept VISA throughout Mexico. Currently, sending money with the App is free to both the sender and the recipient, making it a cost-effective solution for a population of people that generally have limited access to banking services. Innovative Payment Solutions Inc (OTCMKTS: IPSI) operating out of Carmel by the Sea, California is a fintech provider of digital payment solutions and services to businesses and consumers. The Company is focused on operating and developing “e-wallets” that enable consumers to deposit cash, convert it into a digital form, and remit the funds to Mexico and other countries quickly and securely. IPSI first e-wallet, the Beyond Wallet, is currently operational. The Company’s flagship e-wallet, IPSIPay, was soft launched in December 2021.

In January IPSI launched the IPSIPay App (find it here in app store) representing a significant step in the Company’s strategy to establish a dominant foothold in the biggest remittance markets around the world. The Company’s IPSIPay App provides a cost-effective way for users to remit money to Mexico, which, according to wral.com, is the third largest remittance recipient in the world, and represents annual remittances of over $50 billion. In addition to its functionality to send and receive funds, the IPSIPay App also acts as a digital wallet, enabling users to perform many banking related functions, including the ability to use a VISA debit card to execute financial transactions. The App also enables users to invest in crypto currencies, gold, and silver.

In addition to Mexico, IPSI is also targeting India and the Philippines, representing three of the top four remittance recipients in the world. The IPSIPay App, in addition to the ability to make remittance payments, provides various other valuable services for the unbanked and underbanked, offering a low-cost solution that enables them to have access to many digital payment services conducted through their phone.   Relative to alternatives in the marketplace, the IPSIPay App provides remittance and bank-like services at a discount, providing a viable alternative with lower costs and greater functionality. The lower costs associated with the IPSIPay App are aligned with the United Nations’ current mandate to reduce remittance costs, whose objectives are to help migrant workers around the world.

Compared the market cap and share structure between $hmbl and $ipsi and it’s night and day. Not to mention no dilution for ipsipay. Do your homework this week as ipsi will see gains again next week.

To Find out the inside Scoop on IPSI Subscribe to Microcapdaily.com Right Now by entering your Email in the box below 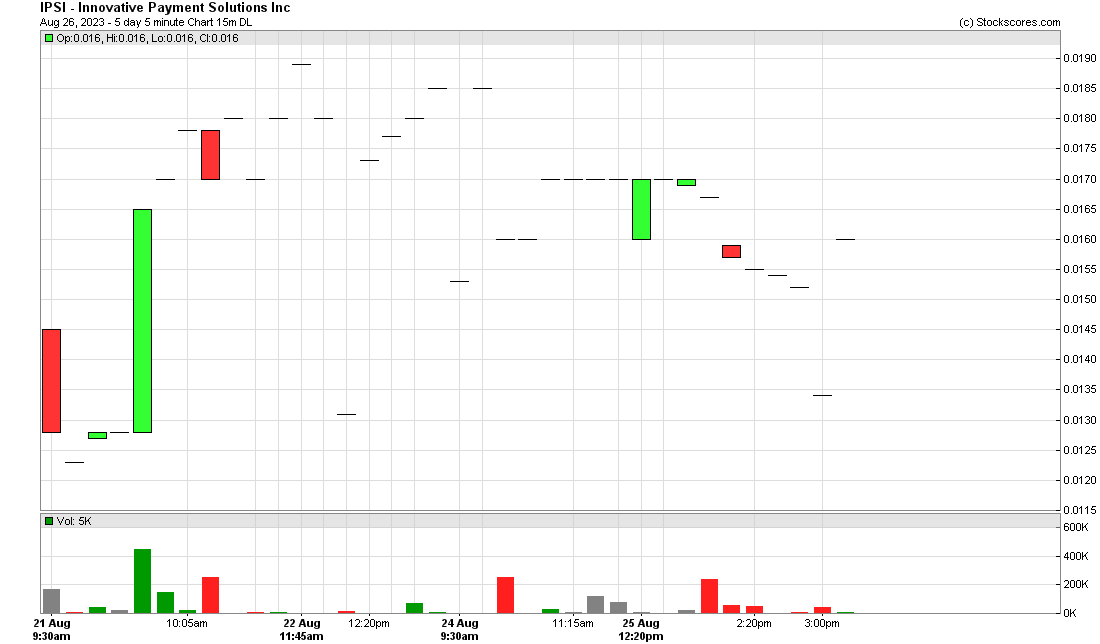 IPSI has engaged Response Media to execute a digital marketing campaign and maximize the awareness of the IPSIPay platform. The Company is confident that, as prospective users better understand the capabilities and the attractive price point of the IPSIPay App, IPSI will see a strong uptake in the number of active users. On April 4, IPSI announced the second-phase launch of its IPSIPay App following approval from VISA® for use of its debit card services as part of IPSIPay. Following the initial launch of IPSIPay in December 2021, the availability of VISA debit card capability as part of IPSIPay enhances IPSIPay’s positioning as an attractive mobile banking solution for IPSI’s initial target market — the large and growing unbanked, under banked and money remittance market.

The new IPSIPay VISA debit cards may be obtained via the IPSIPay App, enabling users to conduct transactions anywhere VISA is accepted globally. The VISA debit card is loaded using the IPSIPay App, providing users the ability to withdraw cash with minimal fees from their digital wallet using the VISA debit card in ATM machines. The IPSIPay VISA debit card also gives customers access to their money from a large merchant network around the world, providing the ability to make everyday purchases anywhere that accepts VISA cards. Simultaneously, the cards provide users with a bank account via Metropolitan Bank, thereby enabling a path for users to potentially establish or enhance their credit.

This second phase launch of the IPSIPay app also features increased functionality, including the ability for users to make cash deposits into their IPSIPay wallets at branches of Chase, Bank of America and Wells Fargo, which immediately becomes available for use in their digital wallet on the IPSIPay app. This increased functionality also supports all current IPSIPay features, such as wallet-to-wallet cashless transactions – including over borders (including from the U.S. to Mexico).

The IPSIPay VISA debit card provides a means for those accustomed to relying on cash the ability to live in the cashless economy that has emerged, providing a convenient, efficient, and cost-effective way for the unbanked and underbanked to move money at rates significantly lower than traditional methods. Fees associated with accessing money through ATMs are minimal, and there is no cost for users to move funds from wallet to wallet or for shopping directly with their wallet, providing IPSIPay users with flexibility in remitting money across borders.

The card provides significant benefits to IPSIPay App users, ultimately making it easier and cheaper to transfer money to and from anywhere around the world. The VISA debit card also provides users the ability to withdraw funds from their IPSIPay digital wallet, providing much more flexibility for users in accessing money that is on their IPSIPay App and giving users access to a large network of ATMs.

IPSI CEO William Corbett said “We believe that while these benefits will be game-changing for our users and creates the potential to add millions of people and dollars into the cashless economy, it is just the beginning. We look forward to updating our shareholders on future promising developments for IPSI very soon.”

Currently trading at a $12 million market valuation IPSI has 367,901,679 shares outstanding, 90,036,969 of which are restricted leaving 277,864,710 free trading IPSI shares. The Company is well funded with $3.6 million in the treasury and they don’t dilute the stock. IPSI OS has not changed since August of 2021 and is virtually the same share structure IPSI had in February 2021 when the stock ran to $0.36 per share representing a $100 million plus valuation. HMBL a Company in the similar business with a significantly less well-developed product traded at a $1 billion market valuation at one point. IPSI is initially targeting southern California and then expanding to other states including Texas and Florida that have high immigrant populations. IPSI’s initial target market — the large and growing unbanked, under banked and money remittance market worth $50 billion just between US and Mexico. The Company believes it has a superior product and if they are able to capture even a very small share of the market, this represents a significant revenue opportunity for IPSI. We will be updating on IPSI when more details emerge so make sure you are subscribed to Microcapdaily.

Disclosure: we hold no position in IPSI either long or short and we have not been compensated for this article