Microvision, Inc. (NASDAQ: MVIS) is easily among the most exciting stories in small caps and is under heavy accumulation as the stock moves steadily northbound. MicroVision is the owner of a valuable intellectual property portfolio, a top manufacturer of high resolution LiDAR system’s and owner of a technology disrupting the Automotive industry and Augmented reality and IOT. Speculation is sky high after MicroVision announced the potential sale of the company with its first quarter 2020 financial results.

Microsoft is a long-standing customer for Augmented Reality modules from Microvision and is currently making a push into the VR space. MicroVision saw a significant boost recently after that Microsoft announced It is acquiring ZeniMax Media, the parent company of popular video game publisher Bethesda Softworks, for $7.5 billion. The Bethesda deal is expected to be finalized in the second half of fiscal year 2021 and is three times as much as the $2.5 billion that Microsoft paid for Mojang, the company behind Minecraft, in 2014. It will be Microsoft’s most expensive video game acquisition ever.

Microvision, Inc. (NASDAQ: MVIS) operating out of Redmond, Washington is an innovator in ultra-miniature sensing and projection display technology developing laser scanning technology for projection, 3D sensing, and image capture. MicroVision’s display technology uses a micro-electrical mechanical systems (MEMS) scanning mirror with red, green, blue, and infrared lasers, optics and electronics to project and/or capture images. MicroVision owns a valuable intellectual property portfolio that includes 450 issued patents recognized by the Patent Board as a top 50 IP portfolio among global industrial companies and has been included in the Ocean Tomo 300 Patent Index. MicroVision licenses its products primarily to original equipment manufacturers (OEMs) such as STMicroelectronics. MicroVision is led by CEO Sumit Sharma who is the former Head of Operations at Google Glass.

The MEMS scanning micro-mirror is the basis of MicroVision’s technology platform. The MEMS design consists of a silicon device with a millimeter-scale mirror at the center. The mirror is connected to flexures that allow it to swing vertically and horizontally to display (or capture) an image. In projection-mode the MEMS laser beam scanning display method can be compared to raster scanning in a cathode ray tube (CRT) display. Product applications include mobile projection,] virtual retinal display, head-mounted display, and automotive head-up display. The technology has also been used in a smartphone by the manufacturer Blackview.

To Find out the inside Scoop on MVIS Subscribe to Microcapdaily.com Right Now by entering your Email in the box below 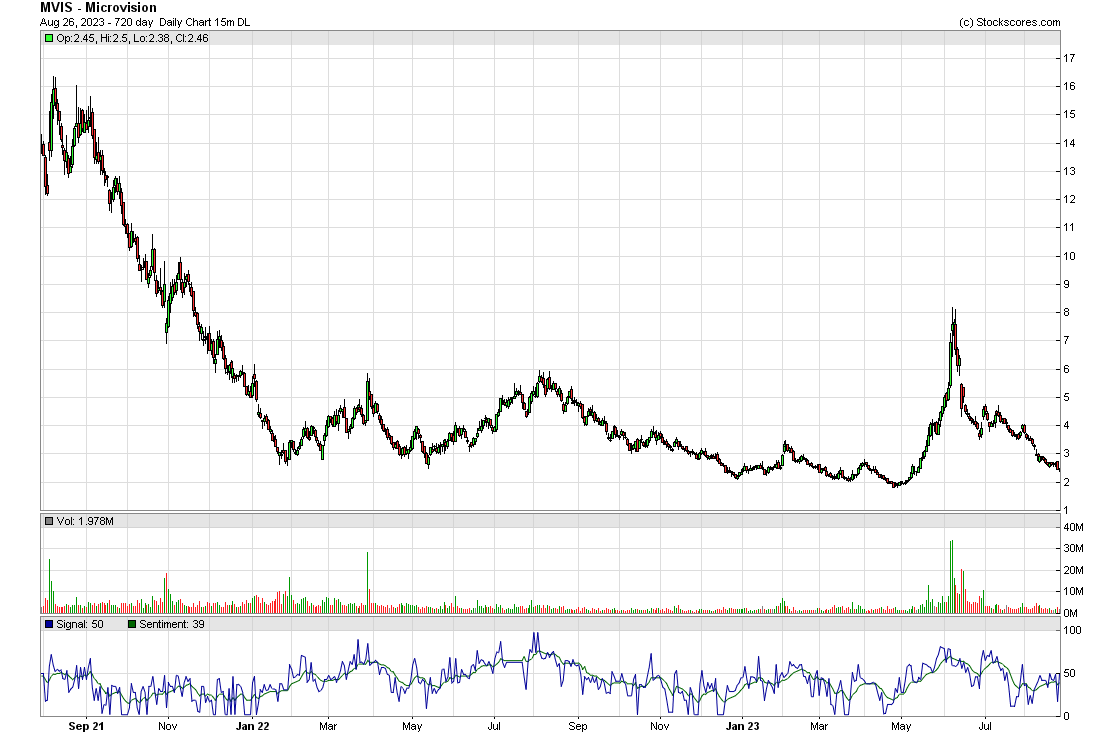 MicroVision is the creator of PicoP® scanning technology, an ultra-miniature sensing and projection solution based on the laser beam scanning methodology pioneered by the Company. MicroVision’s platform approach for this sensing and display solution means that its technology can be adapted to a wide array of applications and form factors. MicroVision combines its hardware, software, and algorithms to unlock value for its customers by providing them a differentiated advanced solution for a rapidly evolving, always-on world.

On November 10 MicroVision announced it has made important progress in the development of its first-generation MEMS Dynamic Scanning Long Range Lidar (LRL) sensor module, including continued progress toward meeting key automotive industry requirements. These initial product tests demonstrated key features including an ability to achieve a range of 200 meters and continued functionality when exposed to sunlight, lidar sensors of other vehicles and other rogue signals.  MicroVision CEO Sumit Sharma stated: “We expect that automotive industry standards will call for long range automotive lidar products to detect a target with 10% reflectance at 200 meters, which would give a lidar sensor the ability to detect a piece of tire on the roadway at that range and enable a vehicle to maneuver away from such hazards at highway speed. I believe the MicroVision team is on track to have our first generation LRL sensor module achieve this goal in addition to having high resolution at full range. Our initial product tests have also demonstrated that the sensor module has the ability to suppress noise from sunlight and other light sources with our new, proprietary MEMS scanning technique, which we expect will also be a key feature of any future product. I also believe gaining confidence in our ability to implement these features in our sensor module puts MicroVision on track to meet key lidar technology requirements for automotive OEMs and gives MicroVision a strategic advantage in the LRL space. We are excited about the progress we are making in the development of our first-generation MEMS scanning LRL sensor module. By developing and demonstrating these core features early, we facilitate our ability to have hardware available for testing in the April 2021 timeframe.”

Currently making a poweful move northbound MVIS is easily among the most exciting stories in small caps and is under heavy accumulation as the stock moves steadily northbound. MicroVision is the owner of a valuable intellectual property portfolio, a top manufacturer of high resolution LiDAR system’s and owner of a technology disrupting the Automotive industry and Augmented reality and IOT. Speculation is sky high after MicroVision announced the potential sale of the company with its first quarter 2020 financial results. Microsoft is a long-standing customer for Augmented Reality modules from Microvision and is currently making a push into the VR space leading to a lot of speculation. MicroVision CEO Sumit Sharma commented on recent Q3 results; “MicroVision is focused on pursuing a strategic transaction at the right value for our shareholders. Our focus is to drive to an agreement at a valuation that reflects the sustainable strategic advantage, we believe, our technology offers now and into the future. We are continuing to work towards this goal while maintaining expenses at appropriate levels. We appreciate the strong support of our shareholders, as evidenced by the vote at our special shareholders meeting on October 8th as we continue the work ahead.” We will be updating on MicroVision when more details emerge so make sure you are subscribed to Microcapdaily so you know what’s going on with MVIS.

Disclosure: we hold no position in MicroVision either long or short and we have not been compensated for this article.