Netlist, Inc. (OTCMKTS: NLST) major reversal brewing as NLST is under heavy accumulation at current levels. NLST is one of the most exciting stocks we have reported on here at MIcrocapdaily (since it was sub $0.50) and we will be reporting on it when it up lists to NASDAQ a move that will double the current market valuation at least. Netlist keeps winning and winning big in their patent infringement lawsuits against Samsung and Google. In 2021 Netlist won a settlement against SK Hynix and more recently they won an important victory against Google when Judge Seeborg ruled on Claim 16 and denied intervening rights to Google making it liable for infringement of Netlist technology dating back to 2004. There are also still multiple cases against Samsung and Micron that Netlist sits in very strong positions. Samsung had their previous contract with Netlist voided which makes all the licensed technology they sold during the period of the contract open to litigation. And, like the Google case, we know that they infringed Netlist technology.

Netlist has seen massive growth of its business over the past year and the Company now sits in a strong position to collect massive settlements in what could be the largest patent infringement lawsuit in history that could catapult this situation into a whole new stratosphere. During the past year alone the Company’s rapidly growing semiconductor business has doubled. According to the Company’s recent Q2 filing Netlist product sales for the second quarter ended July 2, 2022 were $55.4 million, compared to net product sales of $24.4 million for the second quarter ended July 3, 2021 and $50.2 million in the most recent quarter. Net loss for the second quarter ended July 2, 2022 was ($5.0) million, or ($0.02) per share and as of July 2, 2022, cash, cash equivalents and restricted cash was $60.6 million, total assets were $99.6 million, working capital was $46.3 million, and total debt was $8.2 million. The upside on Netlist is enormous as the Company’s semiconductor business continues to grow exponentially while the aggregate of the multiple infringement lawsuits Netlist is pursuing could very well yield the largest patent infringement settlements in history.

Netlist, Inc. (OTCMKTS: NLST) provides high-performance solid-state drives and modular memory solutions to enterprise customers in diverse industries. The Company’s NVMe SSDs in various capacities and form factors and the line of custom and specialty memory products bring industry-leading performance to server and storage appliance customers and cloud service providers. Netlist licenses its portfolio of intellectual property including patents, in server memory, hybrid memory and storage class memory, to companies that implement our technology. Netlist holds a portfolio of 130 issued and pending U.S. and foreign patents, many seminal, in the areas of hybrid memory, storage class memory, rank multiplication and load reduction, among others. The strength of Netlist’s patent portfolio reflects its many years of research and development and track record of bringing disruptive new products to market.

The Company is led by visionary CEO C.K. Hong, CEO, who brings over two decades of high-tech management experience to Netlist. He most recently served as President of Infinilink, a DSL equipment manufacturer, and as executive vice president of Viking Components, Inc. Prior to that, he spent 15 years with LG where he held various senior management positions in the U.S and Korea. Mr. Hong holds an MS in technology management from Pepperdine University and a BS in economics from Virginia Commonwealth University. 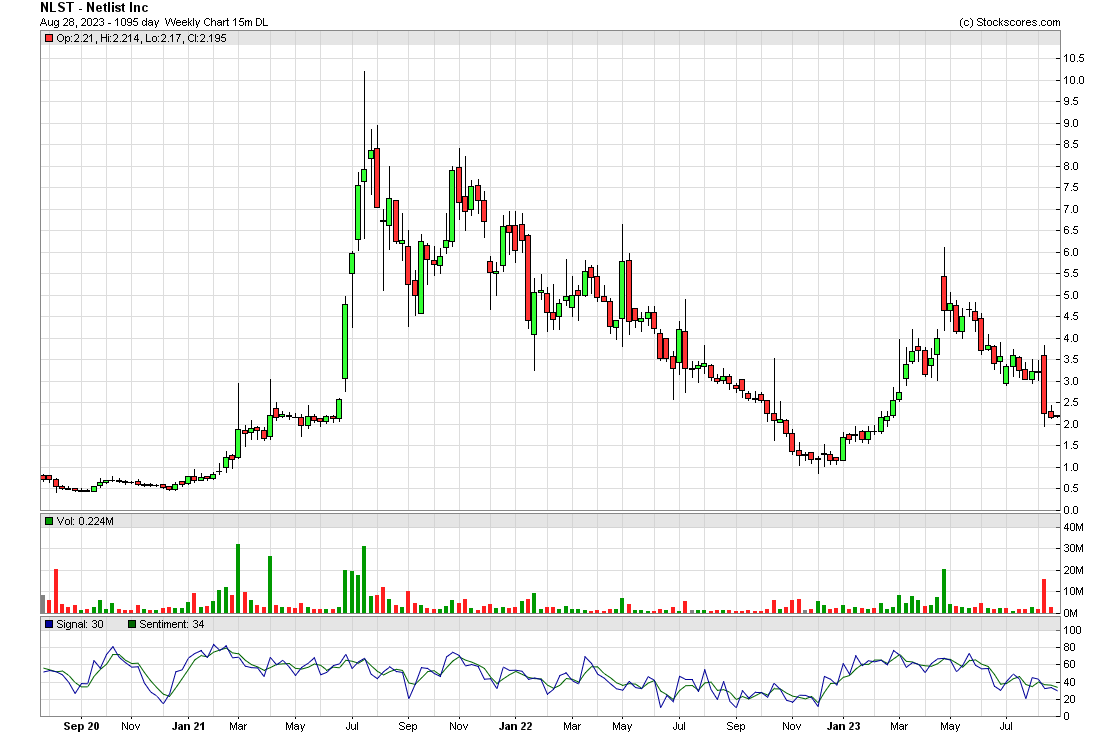 On August 8 Netlist reported the United States District Court for the District of Delaware issued an Order granting in part Netlist’s motion for dismissing Samsung’s First Amended Complaint and denying Samsung’s request to file a Second Amended Complaint. The Court issued a written opinion supporting the Order, and dismissed Samsung’s Counts IV, V, VI, VII, X, and XI from the case. The partial dismissal means Samsung cannot pursue a separate action on the patents Netlist first asserted in Texas, and now cannot carry out its alleged obligation to protect Google from the ‘912 Patent in Delaware. In addition, Samsung voluntarily withdrew its Motion to Sever and Stay the case that Netlist brought in the Eastern District of Texas. Separately, following the Order, Netlist filed a complaint against Samsung in the Eastern District of Texas for Samsung’s infringement of the ‘912 Patent.

Jayson Sohi, Netlist’s Director of IP Strategy, said, “We are pleased Judge Andrews dismissed half of the pending claims from Samsung’s Delaware lawsuit, including the ‘912 claim. We look forward to continue defending our intellectual property rights in the remaining portion of this case.”

Currently trading at a $644 million market valuation NLST has 232 million shares outstanding and an excellent balance sheet with $99 million in assets vs. $52 million in liabilities. Netlist traded over $10 per share with the same share structure in summer 2021 and since than the Company has seen dramatic improvements to its balance sheets. Netlist has been reporting one record breaking quarter after another as the Company’s semiconductor business has more than doubled over the past year. The upside on Netlist is enormous as the aggregate of the multiple infringement lawsuits Netlist is pursuing could very well yield the largest patent infringement settlements in history and we could see multiple resolutions within the next 6 months. There is little wonder why investors are accumulating heavily at current levels and a major reversal to the upside is brewing. We will be updating on Netlist when more details emerge so make sure you are subscribed to Microcapdaily so you know what’s going on with Netlist.