Oncology Pharma Inc (OTCMKTS: ONPH) is rocketing northbound in recent weeks from a start point of $0.37 (52-week lows) in October to recent highs over $1.25 per share the stock is on fire and getting noticed by investors. On Friday alone ONPH was up 27% to a close of $1.22 per share on just under $300,000 in dollar volume.

Biotech stocks have a long history of making spectacular moves and ONPH has been no stranger to big runs and was one of the biggest runners of 2021 skyrocketing from pennies to highs of $50 per share. The stock was still trading at around $5 in January of this year and recently reversed off $0.37 lows in October. From current levels ONPH has a huge gap to fill and could see a significant bounce from currnet levels.

Oncology Pharma Inc (OTCMKTS: ONPH) is a pioneering oncology company dedicated to licensing, developing, manufacturing and commercializing therapeutics.  The company has assembled a team of executives and advisors with proven multi-disciplinary expertise in the field of oncology, therapeutics and leadership to identify, negotiate and amalgamate “best in class” research, technologies, therapeutics and delivery mechanisms that are synergistic and collaborative. The goal is to create value, reduce costs and increase the speed of regulatory approval and commercialization of effective and safer cancer drugs.

Oncology Pharma entered into a Licensing Agreement with NanoSmart®Pharmaceuticals Inc. for its “novel” drug delivery platform that can target many types of cancer and other diseases. One of the keys to NanoSmart’s® platform technology is a “patented” (US 7,799,327 and EU 1706145 B1) human-derived, antinuclear antibody (ANA) that targets areas of necrosis present in solid tumors.  One of the most commonly used anti-cancer drugs, alone and/or in combination with medications, for treating a wide variety of cancers such as breast, ovarian, lung, bladder, Kaposi’s sarcoma, lymphoma and acute lymphocytic leukemia is doxorubicin. Doxorubicin is “encapsulated” within a lipid nanoparticle and then coated with NanoSmart’s ANA.

Oncology Pharma signed a Licensing Agreement with Connect2Med for its smartphone App.  The use of mobile devices such as Smartphones and their applications (Apps) has transformed many aspects of life in the modern world from consumer healthcare to clinical practice and limited use in clinical trials. The App is a powerful and useful tool for recruiting, enrolling and supporting patients for clinical trials.

Oncology Pharma has licensed from KCL Therapeutics, Inc. Small molecule modulators of NR2F6 Activity for treatment in humans of colon cancer.  The IP entails compounds useful for alteration of NR2F6 activity. In some embodiments of the invention compounds disclosed are utilized for stimulation of NR2F6 activity, alone, or in combination with PKC activation.

In a further Licensing Agreement, Oncology Pharma has licensed from Regen Biopharma, Inc. an Antigen Specific mRNA Cellular Cancer Vaccine IP for treatment in human pancreatic cancer.     The IP entails antigen specific cancer vaccines in which immunogenic epitopes are produced intracellularly by administration of modified mRNA encoding said immunogenic epitopes.  In one embodiment of the IP, said modified mRNA encodes peptides derived from the protein surviving.  By directly inducing gene expression of the antigens to which an immune response is desired, immunogenic peptides are generated intracellularly, thus allowing for a wider repertoire of epitopes to be presented to the adaptive immune system, which augments likelihood of successful induction of immunity.

Microcapdaily has reported on Regen BioPharma Inc many times and we have reported on RGBP’s business relationship with Oncology for years. In this 2021 article on RGBP we stated: “This comes after the Company’s CEO David Koos issued a letter to shareholders which summarized some of the recent accomplishments including recently going “pink current” and becoming fully compliant, settlings the lawsuit with Chemdiv, growing the Companys valuable patent portfolio as well as granting two licensees to Oncology Pharma for which RGBP was paid $1,905,000 in cash and securities.

To Find out the inside Scoop on ONPH Subscribe to Microcapdaily.com Right Now by entering your Email in the box below 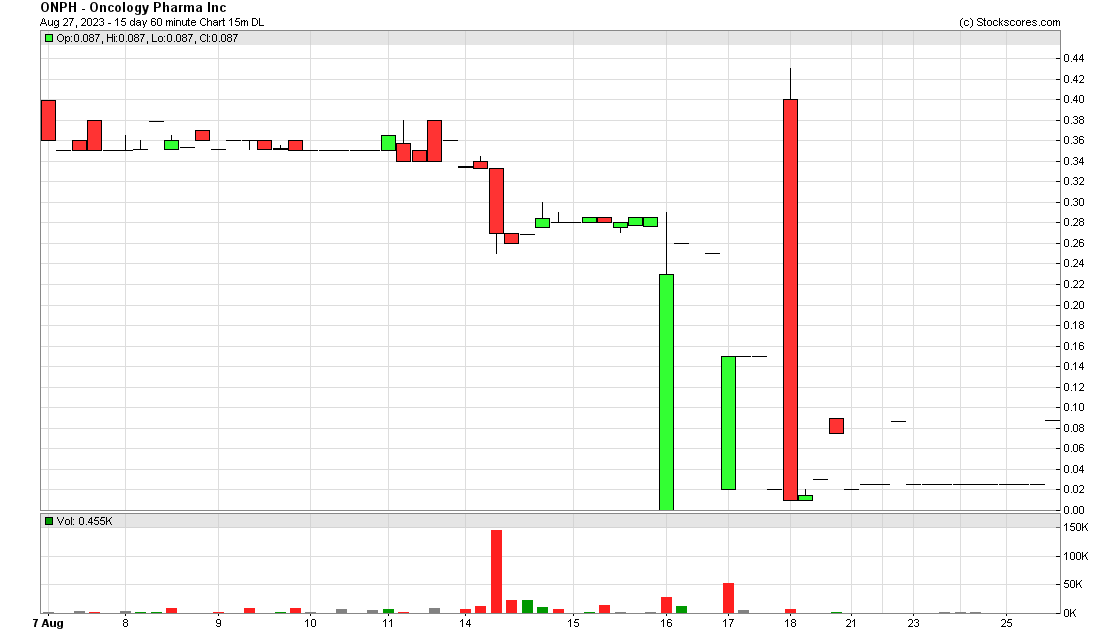 Earlier this year Oncology Pharma reported initial feasibility study of the Nanoemulsion drug delivery system is complete and results have met the threshold for moving forward to the next steps of development. The formulation under development consisted of the active pharmaceutical ingredient (dactinomycin) encapsulated in a saturated lipid and combined with various emulsifiers, surfactants, and stabilizers. The specific identity and ratios of these ingredients, along with the processing methods and processing parameters utilized, lead to formulations with very different characteristics. Various qualitative assessments (described in the previous section) were performed on the various iterations of the formulations. The most promising formulation candidates (i.e., those which demonstrated acceptable feasibility using qualitative assessments) were forwarded to an analytical laboratory for initial characterization.

On July 12 ONPH announced it is furthering progress in discussions with investors and developing the financing model towards the next step of the development process with its Nanoemulsion drug delivery system. The Company is confident that it will progress towards this next step.

The early feasibility study was intended to serve as a demonstration that the development team possessed the capability of formulating research-scale nanoemulsion formulations of dactinomycin. Initial characterization of these formulations would be carried out to demonstrate that the nanoemulsion formulation possessed several desirable characteristics that made them suitable candidates for further nonclinical development. As stated, the Company is confident these steps were met and looks forward to moving ahead.

Essentially, all of the specific aims under the scope of this project were met. The capability to formulate nanoemulsions that incorporate the active pharmaceutical ingredient, dactinomycin, was demonstrated. Specifically, the study identified two formulations feasible for further development.

The capability to be able to innovate and make progress in this early stage demonstrates the team’s ability to identify developmental goals and overcome formulation challenges to produce a drug formulation with suitable characteristics for further, formal nonclinical development. These characteristics include the ability for the nanoemulsion to incorporate the majority of available drug into the lipid nanoparticles, a demonstrated release-over-time profile, and stability during storage. Additionally, test methods were established at independent contract laboratories to support basic formulation characterization and accurately detecting the drug concentration in control and test formulations in support of future nonclinical studies.

Currently trading at a $36 million market valuation ONPH os is 38,563,216 with 10.8 million shares in the public float. While the Company is pre-revenue, they do have over $2 million in investments and little debt with $1 million in total liabilities. While there is plenty of speculation online on why exactly ONPH is running here, from a technical standpoint the stock is due for a mammoth bounce. As stated, earlier ONPH was one of the biggest runners of 2021 skyrocketing from pennies to $50 per share and has been steadily dropping since then. In October ONPH finally reversed northbound off $0.37 52-week lows after a year and a half of steady declines with a massive gap to fill.   We will be updating on ONPH when more details emerge so make sure you are subscribed to Microcapdaily so you know what’s going on with ONPH.

Disclosure: we hold no position in ONPH either long or short and we have not been compensated for this article