Pharmacyte Biotech Inc (OTCMKTS:PMCB) has seen an explosive rise up the charts after the Company said it may have what the White House Coronavirus Task Force is looking for just as COVID-19 cases are surging across the country. According to PMCB its COVID-19 testing kits have exactly that capability.  The company licensed its COVID-19 test from Hai Kang Life Corporation in Hong Kong and is currently awaiting Emergency Use Authorization from the U.S. Food and Drug Administration (FDA).  One of the key selling points for PharmaCyte’s testing kits is that they are ideally suited for the mass testing that Dr. Fauci is convinced will make a difference.

PMCB has been around for years and many longs rightly have a deep distrust for management. One cannot discount the stocks history of  explosive moves especially the historic rise of 2014 back when it was NVLX. Currently at the bottom of its range and highly liquid; speculators take PMCB very seriusly here.

Microcapdaily has been covering PMCB for years, we noted back on January 18, 2015 shortly after PMCB started trading on the OTCBB after the name and ticker changer from NVLX. We stated at the time – Pharmacyte Biotech Inc started trading on the OTCBB on January 8 after the name change from Nuvilex, Inc. The ticker symbol changed from NVLX to PMCB. The Company said that the name change is part of its transformation process to operate solely as a pure biotechnology firm leveraging its Cell-in-a-Box® technology. 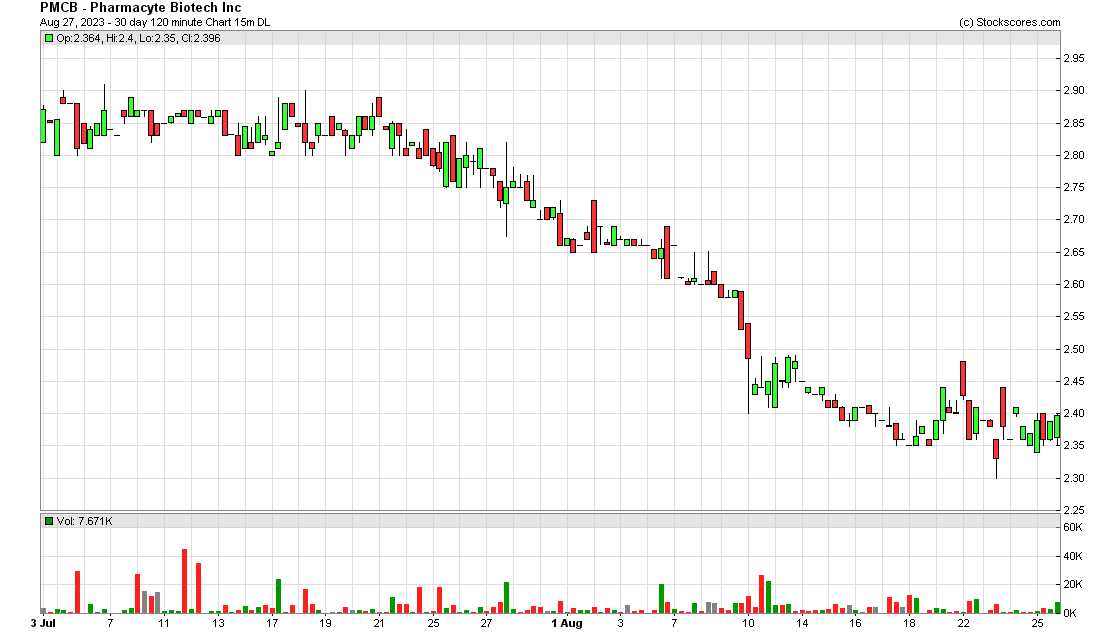 PMCB has been around for years and was initially incorporated as eFoodSafety.com, Inc. in 1996 in Nevada. The live-cell encapsulation technology employed by Pharmacyte Biotech is a way to enclose living cells in protective “cocoons” about the size of the head of a pin. Each capsule can enclose approximately 10,000 cells and the technology is considered a “platform” upon which treatments can be developed.

According to PMCB its COVID-19 test is capable of testing hundreds of people at one time using “sample pooling” or “population screening.”  The ability to test hundreds at one time will allow PharmaCyte to leverage the sensitivity of the test to local, state and government agencies, communities, companies, organizations, schools, etc., to test a pool of employees to get these entities back to work while giving them the means to do continuous testing into the future, which will create a safer environment for employees to feel comfortable in the workplace.

Professor Yu said of the ability of this COVID-19 test to do pool testing, “Where large volumes of tests are required, pooling of samples for ERT-PCR testing can increase sample throughput.  The pooling strategy expedites the screening process for which the accuracy can be ensured by the highly sensitive ERT-PCR test method.”

Currently trading at a $36 million market valuation PMCB has very little debt and has done a lot to clean up the balance sheet in recent years. PMCB is an exciting story developing in small caps; one cannot discount the stocks history of  explosive moves especially the historic rise of 2014 back when it was NVLX. Currently at the bottom of its range and highly liquid; speculators take PMCB very seriusly here. Now that the Company has jumped on the covid.19 bandwagon, a highly succesful route for many strugging biotechs before it, anything is possible. We will be updating on PMCB when more details emerge so make sure you are subscribed to Microcapdaily so you know what’s going on with PMCB.