PHI Group, Inc. (OTCMKTS: PHIL) is trending northbound in recent trading since hitting new 52-week lows of $0.0008. The stock has a massive international following that is waiting for PHIL to start running again after many, many months of decline since the stock was $0.02 per share this time last year. In May PHIL filed an 8k terminating the $1.5 billion loan program with Geza Holdings AG and the $2.0 billion loan program with Neok Financial Incorporated and this has slowed down the Company’s acquisition progress as they are waiting on funds to close both the KOTA Energy Group LLC and KOTA Construction LLC deals for $64 million and the $100 million acquisition of Five Grain Treasure Spirits Co., On the positive side PHIL has launched the C02 token on DigiFinex with a weekly volume of more than US$ 25 million although the token has dropped to $0.125 currently. Also, recently the Company’s subsidiary, Empire Spirits, Inc., launched the first U.S. distilled USDA organic baijiu, a joint venture with Five-Grain Treasure Spirits Co., Ltd., to produce ultra-premium organic baijiu spirits to be distilled in the United States. Baijiu, a white spirit distilled from sorghum, similar to vodka but with a fragrant aroma and taste, is the world’s most consumed spirit that boasts sales of over USD $83 billion.

PHIL investors are looking for a massive reversal northbound and a return to previous highs of $0.02. The stock has suffered in recent months from significant dilation which has decimated the share price yet still PHIL investors are accumulating many of the new shares coming into the market.  Investors are waiting for an update from the Company. On Friday, PHIL CEO Henry D. Fahman said on twitter:  “We were planning to have a news release this week but the principals of our partner company got Covid and couldn’t get things done as planned. On another note, we have made very good progress with two financing programs and will update soon.  Best regards and GB!” The last press release from PHIL came on May 23 when the Company announced it has signed a Business Cooperation Agreement to collaborate with Tin Thanh Group, a Vietnamese conglomerate, to accelerate solutions for climate change, energy security, sustainable agriculture and environmental protection. Tin Thanh Group is a pioneer conglomerate with decades of experience in providing renewable energy and reducing global emissions, with the following fields: Environment, Energy, and Closed Circular Agro-Industrial Energy. It is supplying energy from renewable fuels to more than 40 industrial plants in Vietnam and around the world.

PHI Group, Inc. is a diversified holding company with a number of subsidiaries, including those engaged in advisory and financial services: (i) PHILUX Capital Advisors, Inc., a Wyoming company specializing in mergers and acquisitions and international capital markets, and (ii) PHILUX Global Funds, a Luxembourg Reserved Alternative Investment Fund, with various sub-funds designed for investment in real estate, blockchain and crypto technologies, agriculture, healthcare, and energy, etc. For more on the Asia diamond exchange read our previous articles on PHIL.

PHILUX Global Funds has focused on working with Vietnam, to be affiliated with World Federation of Diamond Bourses (WFDB) and fully complying with the Kimberley Certification Process (KPC) to set up a modern diamond exchange in Vietnam, also the first ever in the Asia hemisphere, including processing centers for raw, processed and lab-grown diamonds. Vietnam has all the conditions for rapidly becoming a major commercial hub in the Asian region, following the successful model of Dubai Multi-Commodities Centre (DMCC, which includes the Dubai Diamond Exchange and generates more than US$75 billion in combined annual revenues.

$PHIL We were planning to have a news release this week but the principals of our partner company got Covid and couldn't get things done as planned. On another note, we have made very good progress with two financing programs and will update soon. Best regards and GB!

On February 22, 2022, PHI Group entered into a Business Cooperation Agreement with Siennalyn Gold Mining Corporation, a Philippine company with principal address at 19 Quezon Street, Del Rey Ville 1, Baesa, Quezon City, Philippines (“SGMC”), represented by Ms. Fe Melchora B. Alam, its Chairman, President and Chief Executive Officer, in order to cooperate with other to finance, develop, mine and process the mineral assets under the Mineral Production Sharing Agreement (MPSA) denominated as 076-97-IX granted by the Philippine Government through the Department of Environment and Natural Resources (DENR) – Mines and Geosciences Bureau (MGB) to Siennalyn Gold Mining Corporation, which covers 4,116 hectares contract area situated in the Municipalities of RT Lim, Ipil and Tinay of the Province of Zamboanga Sibugay, Republic of Philippines.

Gold – It has been delineated and estimated that approximately 500,000 ounces of gold deposits exist in the SGMC MPSA area, particularly in the Sto. Rosario prospect and Nanao prospect of the area.  The property also has significant copper reserves based on the Technical Report (NI-43-101) prepared by Geologist Gregorio S. Hutalle, Jr., 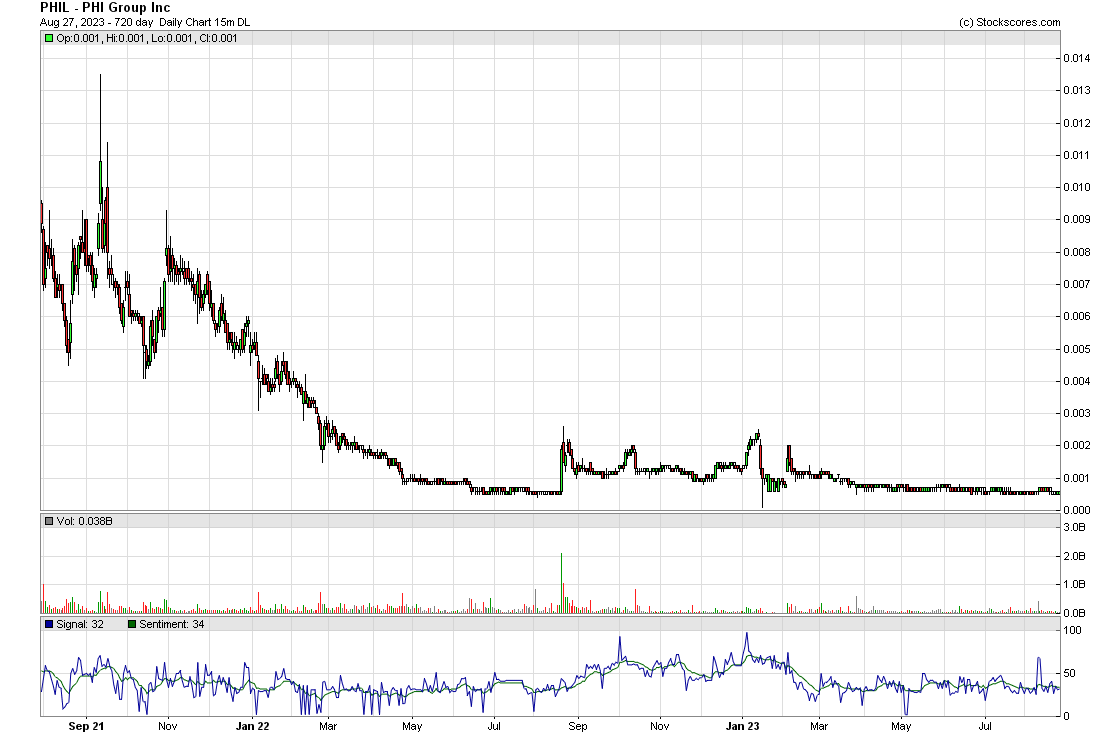 Also, in February PHIL signed a Letter of Intent with KOTA Energy Group LLC and KOTA Construction LLC dated December 08, 2021 to acquire 50.1% of the equity interest of each of these companies which equity interest shall be common equity with economic rights pari-passu with that held by the founders of Sellers. The total purchase price for the transaction will be $64,125,000. The acquisition has not closed. KOTA provides solutions for solar energy to residential and commercial customers, with unique competitive advantages. Separated into two separate and unique companies, KOTA Energy Group (KEG) serves as the sales engine with some of the industry’s top talent in sales. KEG, as one of the fastest growing companies in solar, sold over 10 Megawatts in 2021 bringing in over $12M in revenue. KOTA Construction (KC) is a premier installer with one of the best reputations in the industry for quality and service. KC as the EPC (Engineering, Procurement, and Construction) side of KOTA has over $50M in contracts and 14 Megawatts under management from 2021. KOTA prioritizes itself to have the best employee and customer experience possible, through its high standard of installation quality, its industry leading technology platforms, which enable increased sales volume, while maintaining fast, and transparent project timelines. Its strategic partnerships with key players in the solar industry have increased margins, while delivering top tier products to customers without sacrificing quality. KOTA’s guiding core values of “Become, Create, Give” have been the driving factor in decision making that have led it to become the most highly sought-after solar company to work with in the solar industry. Website for KOTA: https://www.kotasolar.com. In April the Company’s subsidiary, Empire Spirits, Inc., launched the first U.S. distilled USDA organic baijiu, a joint venture with Five-Grain Treasure Spirits Co., Ltd., a company with over one hundred years of tradition in Jilin Province, China. The product will mark the first in a series of ultra-premium organic baijiu spirits to be distilled in the United States. Baijiu, a white spirit distilled from sorghum, similar to vodka but with a fragrant aroma and taste, is the world’s most consumed spirit that boasts sales of over USD 83 billion. Priced up to 10X that of a similarly aged Scotch Whiskey, baijiu is considered the king of all spirits.

Empire Spirits, in cooperation with Five Grain Treasure Spirits Co., plans to use the finest, organically grown sorghum from Kansas and distill the product in California. The baijiu will then be shipped to China, where it will mature in our underground warehouses. In China, where over 90% of baijiu is consumed, there has been a concern in recent times of the safety of Chinese-made foods, particularly consumables. The Chinese have long realized their land, air and water are badly tainted. As Chinese consumers look increasingly to international goods, organic baijiu is one of the products that will fill a large void.

PHIL has also signed and LOI to acquire a seventy percent (70%) ownership in Five-Grain Treasure Spirits Co., Ltd., a company with over one hundred years of tradition in Jilin Province, China, for a total purchase price of one hundred million U.S. dollars (USD 100,000,000), to be paid primarily in three tranches. The Closing of this transaction is scheduled to occur upon the payment of the final tranche on September 18, 2022. CO2-1-0 (CARBON) CORP., a subsidiary of PHI Group, Inc, PHIL, aims to provide a solution to the disruptive new carbon market (voluntary and compliance market) using blockchain-crypto technology, Internet of Things (IoT), and Six Sigma (6σ) methodology, which will empower the real environmentally sustainable projects (renewable energy, energy savings, heat recovery, industrial waste, agriculture, forestry, and many other new technologies), which projects have started in the USA, Vietnam, Indonesia, other ASEAN countries, and worldwide. It has a clear and systematic product development roadmap and the ultimate milestones of the products. The solution, methodology, and improved TACCC (transparent, accurate, consistent, complete, and comparable) business process originally introduced by CO2-1-0 (CARBON) will bring full impact to better environment and life of millions.

CARBON (CO2) is the most environmentally sustainable crypto on earth, developed under BEP-20 (BSC Mainnet) and has passed the CertiK audit, which is the #1 security audit for blockchain protocols, wallets, DApps, and smart contracts. CO2-1-0 (CARBON) CORP. is based in Wyoming, USA, with a fast-growing community named “Carbonian” all over the world. CO2 tokens currently traded at DigiFinex: http://digifinex.com/en-ww/trade/USDT/CO2

C02 launched on DigiFinex with a weekly volume of more than US$ 25 million and and initially traded as high as US$ 0.52/ token but has dropped to $0.125 where it is forming a new base for now. CO2-1-0 (CARBON) CORP., also recently appointed Mrs. TitaThy Nguyen, Chairman of Vietnam World Energy Council, as the new Executive Member of Advisory Board.

Currently trading at a $25 million market valuation PHIL has 30,273,790,656 shares outstanding, 2,036,720,077 of which are restricted leaving 28,237,070,579 free trading PHIL shares. PHIL is “pink current” and an SEC filer, releasing their 10Q on time on May 25 showing $5 million in assets and about $6 million in debt. But PHIL is worth a look at current price levels; the Company has exciting initiatives in place in a number of industries and it’s got a large following of investors and has traded million in dollar volume per day in the past. The stock recently hit a new 52 week low of $0.0008 where buyers are currently outnumbers sellers giving many speculators the impression that PHIL has bottomed out and is ready for a significant reversal. Once PHIL begins a real move to the upside many will jump on board. There are a lot of exciting things happening here, especially if the Company secures funding. We will be updating on PHIL so make sure you Subscribe to Microcapdaily.