Progressive Care Inc (OTCMKTS:RXMD) started 2018 with a bang skyrocketing from its $0.03 base to highs over $0.25 per share. Since than RXMD has come back down and is currently treading water just below the $0.05 mark. With enormous revenue and an ambitious plan to up list to a major exchange shareholders are wondering how RXMD will play out for them.

Microcapdaily has been reporting on RXMD for years, back on January 8, 2015 we stated: “RXMD” is a fascinating story taking the bb’s by storm. The stock which has been locked in a battle between $0.001 lows and $0.01 highs has exploded out of its trading range well into penny land. While RXMD still remains quite unknown the stock is quickly gaining the attention of a growing shareholder base who swears this one goes much higher. Everyone knows just how explosive these OTC pharmacy plays can be.

PharmCo Rx Pharmacy is a full-service pharmacy that is unlike any other pharmacy in South Florida. We provide each individual patient with a dedicated, highly qualified team to ensure that the respective needs of all our patients are met quickly and affordably. We are completely dedicated to serving our communities at all times. We proudly support Empower “U¨, PRIDE, Care Resources and many other charitable organizations throughout South Florida. The PharmCo team supports organizations of all religions and faiths, working to bring supplies, food, education and information to all people in need. PharmCo is pleased to sponsor health fairs and local outreach programs in all communities throughout South Florida.

The big story on RXMD is the enormous sales:

“We closed out 2019 with another month of tremendous growth and execution,” commented S. Parikh Mars, CEO of Progressive Care. “December featured organic same-store growth in our core footprint in both sales and cash flows as well as additional strength from our seamless integration of recently acquired FPRX, which has begun to move the needle on all fronts. If we back the FPRX impact on an annualized basis into 2019, that gives us a baseline of $38 million in annual sales as a point of reference from which to grow in 2020.” 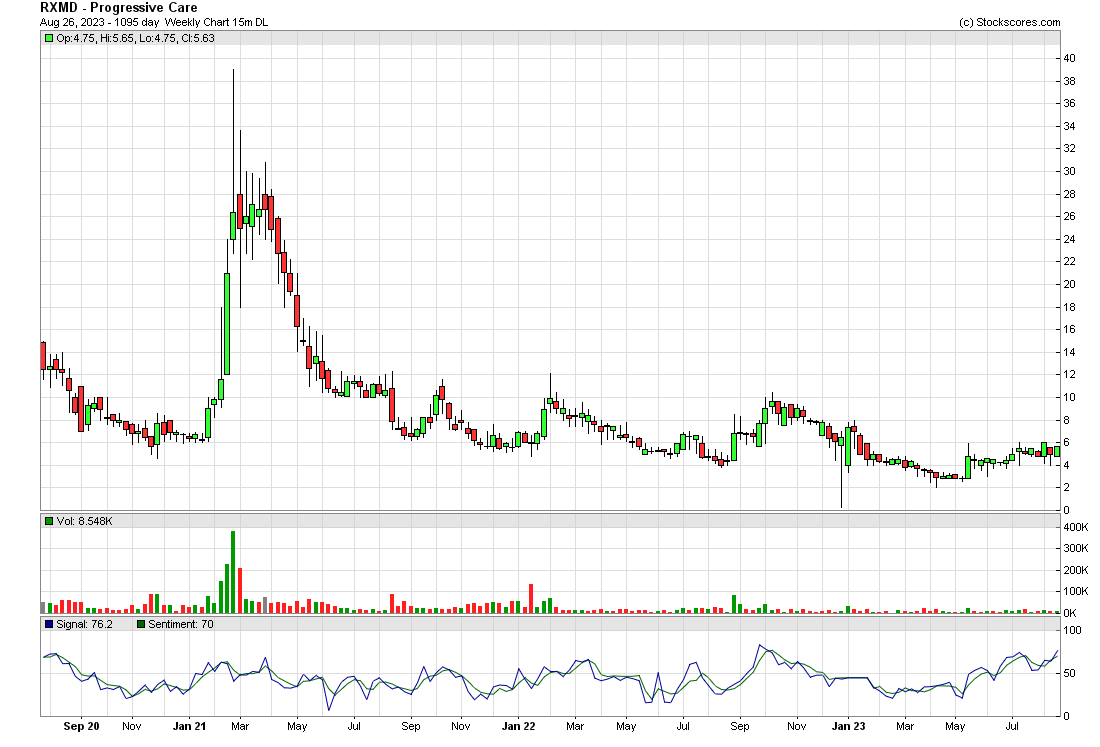 RXMD has made great progress over the years, we reported in January 2016 on RXMD – The Elephant in the room on RXMD had been their inability to get their filings completed which resulted in the stock landing on the Pink Sheets with the yield designation from OTCMarkets. This along with debt holders converting their paper resulted in a seriously depressed stock price.

RXMD is now OTCQB and is planning to up list to a national exchange recently reporting: In addition, the Company has already begun the audit of 2019 financial data for all consolidated operations. The process associated with up listing Progressive Care shares onto a major US-listed exchange in 2020 continues to move forward. Audited financials will be submitted on or before March 31. The Company will then move to formally file Form S-1 with the US Securities and Exchange Commission during April before submitting an application for up listing shares to either the Nasdaq or NYSE.

CEO Shital Parikh Mars recently stated on up listing: “Yes. So the ultimate goal has always been to become fully SEC reporting and list on NASDAQ. We think that is the right place and right path for us to go. And we think healthcare is ripe for that change and we think there’s a lot of competition and opportunity in the marketplace for a company like ours to create something special and unique and worthy of being on NASDAQ. We also know that we want to have the right vehicle for it. So it’s not something we want to do just as we are today. We want to evolve into that NASDAQ worthy company, and we are putting all the staff in place, all the factors, all the personnel and resources in place right now to get us to there as our end goal.”

Health and wellness starts with the spirit! Find your pride and purpose and live it. #ideashare2018 pic.twitter.com/h1XLFF5Gt7

The CEO of Progressive Care is Shital Parikh Mars. According to her linkedin page:

Shital Parikh Mars became Chief Executive Officer of Progressive Care in January 2016. Prior to becoming CEO, Ms. Mars was the Chief Operating Officer for 4 years and a vital consultant to Progressive Care from 2010 through 2012. As President and CEO of Spark Financial Consulting, Ms. Mars provided business development consulting services in which she advised the Company on human resources, financial reporting and transactions, operations, compliance, SEC filings, and investor relations, among other things. Prior to her consulting position, Ms. Mars was also the Chief Operating Officer of Basis Financial, a boutique investment banking firm engaged by the Company. Her experience in the financial services industry centers on operational management, preparation and submission of financial statements, mergers & acquisitions, securities offerings, SEC reporting, due diligence, compliance, and regulatory audits. Ms. Mars has a B.S. in Business Administration and Accounting and is a member of the international business honor society, Delta Mu Delta. Ms. Parikh Mars maintains 6 securities license registrations including the Series 7, Series 66, and Series 24.

Microcapdaily reported on RXMD back on October 3, 2016 – Currently trading at a $10 million market valuation RXMD continues to have difficulty getting their filings out in a timely manner.  But RXMD is an exciting story developing in small caps; the Company has continued to report stellar revenue growth now doing over $10 million in annual sales which is rare on the bb’s. As I said this one has a history of parabolic short term gains and its easy to see why, the stock has everything, a large and loyal investor base, huge built in liquidity and continued spectacular sales growth.

There is a lot of discussion going around on RS and while RXMD has not addressed this issue I wanted to add my own opinoin: everyone seems to think that RS is bad and usually results in lower PPS as the result of panic selling etc., but if we really examine the issue we come to an entirely different conclusion. Yes in almost all cases when a non-revenue, sub penny co with a history of dilution does another RS it almost always ends in more downside. And this is the only logical outcome; if management is doing a RS so they can continue to further dilute shareholders why would any shareholder not sell.