Raadr Inc (OTCMKTS:RDAR) got a recent boost after the Company announced Larry “Bone Collector” Williams, the inaugural member of RAADR’s advisory panel, is featured in the 2022 film “Hustle” which is expected to begin airing on Netflix June 8, 2022. Mr. Williams attended Netflix’s “Hustle” world premier in Los Angeles on June 1, 2022. Adam Sandler, Lebron James and Queen Latifah were some of the celebrities that attended the world premiere.

RDAR was originally incorporated under the laws of Nevada in 2006 as White Dental Supply, Inc. focused on selling dental supplies through direct marketing and via the internet. In February 2013 they changed their name to Pitooey!, Inc. before changing it to Raadr Inc in October 2015.

Raadr Inc (OTCMKTS:RDAR) bills itself as the developer of the artificial intelligent proprietary technology application RAADR; a web based tool that provides families with peace of mind when it comes to knowing that children are safe from bullying and predatory behavior unfortunately so prevalent today.

By customizing their own unique monitoring and alert settings, parents and guardians can be alerted when their children’s Facebook, Twitter, Instagram and other pertinent social media platforms under scrutiny become posted with inappropriate language. By utilizing customized keywords chosen by the user that are added to an already existing database, parents and guardians can carry a sense of assuredness that the youth they love and are responsible for are safe and acting in a fun, yet appropriate manner.

RAADR© gives families the ability to protect their image, combat erroneous postings and for individuals safeguard their children from online bullying.

RAADR© is a software development and mobile application developer formed in late 2012. The Company’s core competency is focused on building and acquiring apps and other products, services and companies to build a nationwide network of related businesses that are positioned to serve the mobile app development needs of small businesses and individuals.

In November the Company said they closed on seed capital from a group of investors totaling in the six figure range. This cash infusion will spur growth and greatly shorten the timeline of the mobile development.

To Find out the inside Scoop on RDAR Subscribe to Microcapdaily.com Right Now by entering your Email in the box below 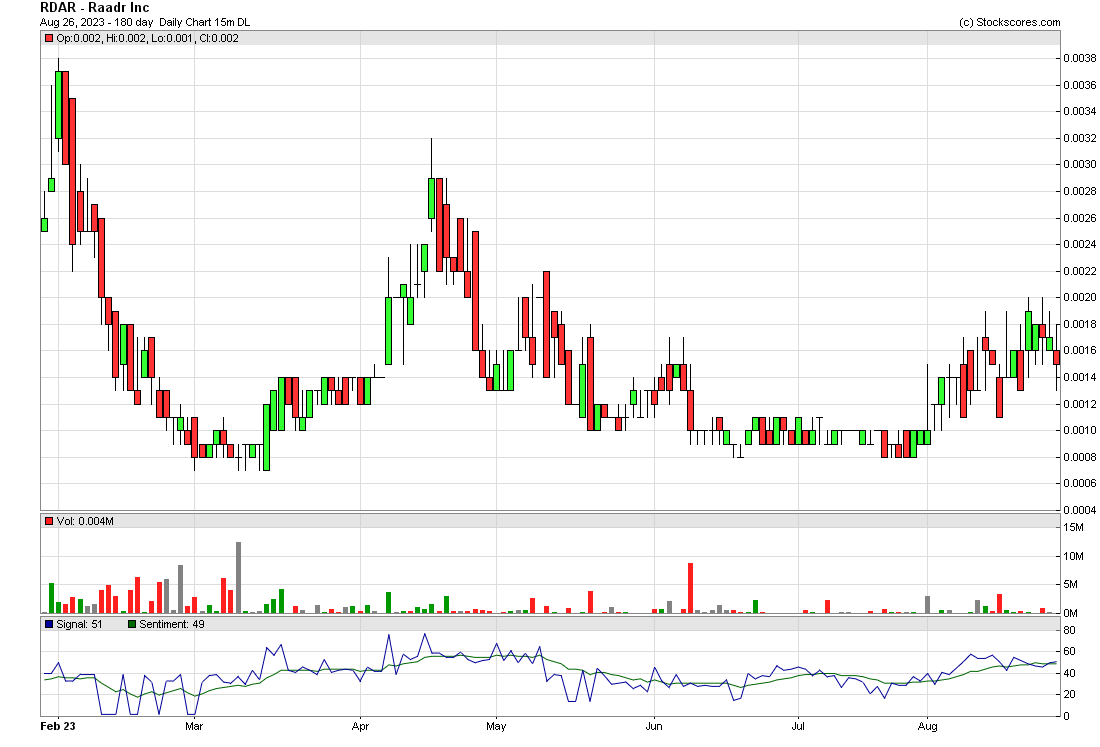 On June 6 RDAR announced Larry “Bone Collector” Williams, the inaugural member of RAADR’s advisory panel, is featured in the 2022 film “Hustle” which is expected to begin airing on Netflix June 8, 2022. Mr. Williams attended Netflix’s “Hustle” world premier in Los Angeles on June 1, 2022. Adam Sandler, Lebron James and Queen Latifah were some of the celebrities that attended the world premiere.

Produced by Adam Sandler and Lebron James and directed by Jeremiah Zagar, the movie tells the story of a down and out ex-NBA player who recruits a player from overseas with a troubled past to play in the NBA. The film is scheduled to be released in select theaters on June 3, 2022, and on Netflix on June 8, 2022. The film features Adam Sandler, Queen Latifah, Robert Duvall, Ben Foster and NBA Champion and TNT NBA Analyst Kenny “The Jet” Smith.

Larry Williams commented, “As a RAADR Ambassador I was extremely excited to work on the set of the new blockbuster hit movie ‘Hustle’, starring Adam Sandler, who is also a producer of this film alongside NBA Superstar Lebron James. This opportunity afforded me the privilege of learning more about some major actors/actresses and athletes regarding bullying and how it has affected their lives. A priority-goal of mine is to continue having conversations about the RAADR application in the pursuit of collaborating with influential people, companies and sponsors to get our tool downloaded in communities nationwide in hopes of possibly saving lives.”

Currently trading at a $1.3 million market valuation RDAR has little assets or revenues and growing liabilities. The Company is the maker of RAADR; a web based tool that keeps kids safe on the internet. The stock was trading over $0.40 but has collapse on significant debt conversions. We will be updating on RDAR when more details emerge so make sure you are subscribed to Microcapdaily so you know what’s going on with RDAR.

Disclosure: we hold no position in RDAR either long or short and we have not been compensated for this article.