Regen BioPharma Inc (OTCMKTS: RGBP) has been steadily dropping since topping out at $0.0819 in September of last year. Now it looks like its oversold and ready for a major reversal and speculators are beginning to accumulate into the selling which is starting to wane at current levels. RGBP has a massive following of shareholders, many of them international that will jump on board at any hint that the bottom has been reached; once RGBP begins to move to the upside it could be fast and furious. The Company has accomplished a lot since the last time we reported on it when they had just accomplished a number of wins including going “pink current” and becoming fully compliant, settlings the lawsuit with Chemdiv, growing the Companys valuable patent portfolio as well as granting two licensees to Oncology Pharma for which RGBP was paid $1,905,000 in cash and securities. More recently Regen began a development program to commercialize its modified mRNA anti-cancer vaccine targeting the Survivin protein. They also announced a program to accelerate the clinical development of its NR2F6 therapies. The Company intends to combine modified mRNA technology with Regen’s existing siRNA (small interfering RNA) intellectual property targeting the NR2F6 nuclear receptor which has been identified as a potentially very important immune cell inhibitor (an immune checkpoint) and cancer stem cell differentiator.

Microcapdaily has been reporting on RGBP since early last year. The last time we covered the Company we stated among other things: “RGBP is one of the most followed stocks in small caps with a huge investors base and it has a long history of big moves skyrocketing to 8 cents plus twice over the past 12 months. There are also plenty of buyout rumors on RGBP; according to many investors It appears there may be a possible merger acquisition looming with Precigen or another big pharma which would make sense as the CEO of Precigen (PGEN) Helen Sabzevari is on RGBP’s Scientific Advisory Board. PGEN trades on Nasdaq with a Market Cap of $766 million. RGBP is in the same clinical therapeutic niche market of Oncology-Immunology candidate drug development that Precigen is in including the same mRNA vaccine technology so logically speaking it would make sense if PGEN straight up buys-out RGBP or does a merger acquisition and the motive to do this are the numerous valuable Patents RGBP owns that address enormous billion-dollar markets.” The Company is led by CEO David Koos who has over 30 years of investment banking and venture capital experience.  He has a deep knowledge of startup businesses, public markers and SEC reporting companies.  Dr. Koos has extensive relationships with large and small financial institutions, hedge funds and entities that Regen BioPharma expects to leverage for company growth. Dr. Koos has a Ph.D. in Sociology and a Doctor of Business Administration with an emphasis in finance.  Additionally, he has authored / co-authored numerous peer reviewed journal articles. Dr. Koos worked hard to get the filings up to date and get the Company compliant which has recently been completed with RGBP now “pink current”

To Find out the inside Scoop on RGBP Subscribe to Microcapdaily.com Right Now by entering your Email in the box below 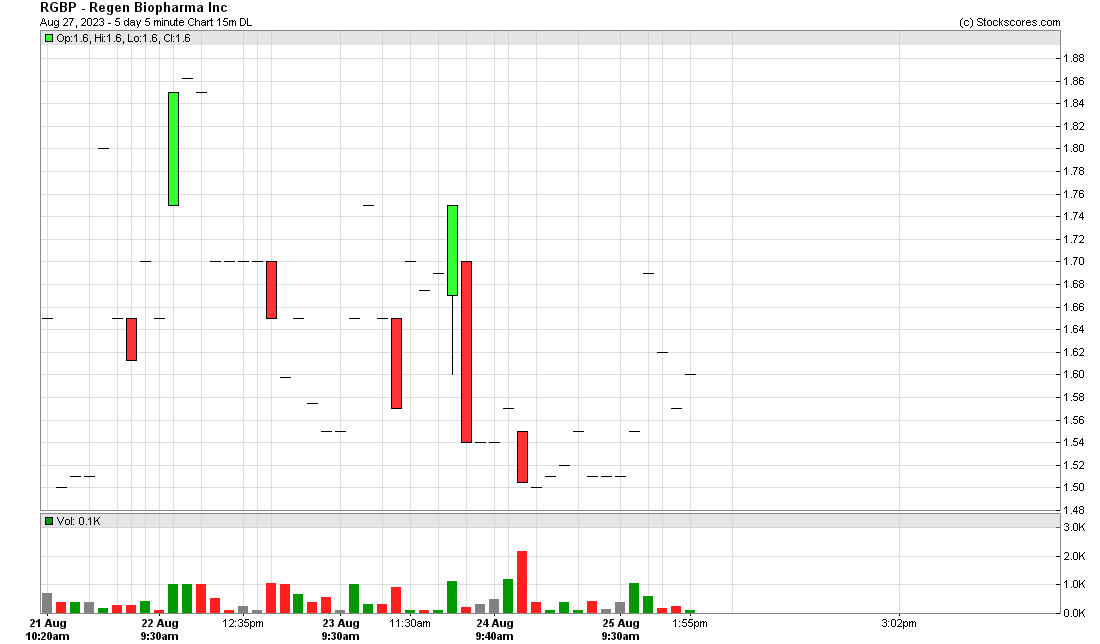 On February 11 RGBP announced it is embarking on a development program to commercialize its modified mRNA anti-cancer vaccine targeting the Survivin protein.  In the first phase of the development program, Regen will design and have experiments carried out that will form the initial series of pre-clinical studies required as part of an FDA IND submission. The patented technology (patent issued in Aug, 2021) is a cellular vaccine that uses a modified mRNA molecule expressing peptides of Survivin which are exposed to dendritic cells.  These dendritic cells are then matured and infused into the cancer patient’s circulation where they are expected to home in on the cancer and destroy it.  There are currently several clinical trials ongoing in the U.S. and Europe using Survivin as a vaccine for multiple different cancers which further supports this approach.

Survivin is the smallest member of the Inhibitor of apoptosis (IAP) family of proteins, involved in inhibition of apoptosis (a form of programmed cell death that occurs in multicellular organisms) and regulation of cell cycle. These functional attributes make Survivin a unique protein regulating cell proliferation and cell death. Expression of Survivin in tumors correlates with not only inhibition of apoptosis and a decreased rate of cell death, but also resistance to chemotherapy and aggressiveness of tumors. Therefore, Survivin is an important target for cancer vaccines and therapeutics. This technology has been out-licensed for use in pancreatic cancer which leaves Regen dozens of other potential indications. In February Oncology Pharma, Inc. announced it will jointly develop Regen’s patented ANTIGEN SPECIFIC MRNA CELLULAR CANCER VACCINES (“MRNA Vaccines”). In April of 2021 ONPH was granted an exclusive right and license for the development and commercialization of the MRNA Vaccines for the treatment in humans of pancreatic cancer. The current intent is that IND (“Investigational New Drug Application”) enabling studies are to be commenced and completed with Regen providing the scientific expertise, laboratory access and modified mRNA and cellular manufacturing needed to complete the studies and ONPH providing the required financing.

On March 10 RGBP announced a program to accelerate the clinical development of its NR2F6 therapies. The Company intends to combine modified mRNA technology with Regen’s existing siRNA ( small interfering RNA)  intellectual property targeting the NR2F6 nuclear receptor which has been identified as a potentially very important immune cell inhibitor (an immune checkpoint) and cancer stem cell differentiator. mRNA is a single-stranded molecule that carries genetic code from DNA in a cell’s nucleus to ribosomes (the cell’s protein-making machinery).

Regen has filed an Investigational New Drug Application  (IND#16928) for their drug termed tCellVax   with the U.S. FDA. tCellVax is intended to utilize siRNA to silence NR2F6 activity in human immune cells thereby activating these immune cells in such a way that they can attack cancer cells. The Company believes that adding new intellectual property utilizing modified mRNA will profoundly simplify the drug development process and thus speed development. Dyo Biotechnologies has been contracted to assist Regen with the development of the above mentioned technology. Regen is in the process of drafting a new patent application pertaining to this intellectual property.

$RGBP Ichim himself, a professional in his field, stated clinicals would probably start in 1-2 years. That was PRIOR to Regen announcing its intention to fast track mRNA technologies.
Sell if you want but I’m staying $RGBPP long. pic.twitter.com/lSgKxaCe9h

Currently trading at a $28 million market valuation RGBP has 4,580,002,832 shares outstanding and a debt load that has caused significant dilution in the past. But RGBP is an exciting story developing in small caps, at current levels the selling pressure that decimated the share price from over $0.08 to half a penny is waning and many speculators are accumulating with a belief that a major reversal is about to happen. As we said, once RGBP begins to move to the upside it could be fast and furious. RGBP is no stranger to big moves and has runner in its blood skyrocketing to $0.0819 not once but twice in the past year alone. The stock is currently trading well below established support levels at $0.01 just a year ago and has a significant gap to fill from current levels. We will be updating on RGBP when more details emerge so make sure you are subscribed to Microcapdaily so you know what’s going on with RGBP.

Disclosure: we hold no position in RGBP either long or short and we have not been compensated for this article