TOMI Environmental Solutions Inc (OTCMKTS: TOMZD) is a global provider of disinfection and decontamination essentials through its premier Binary Ionization Technology® (“BIT™)” platform, under which it manufactures, licenses, services and sells its SteraMist® brand of products, including SteraMist® BIT™, a hydrogen peroxide-based mist and fog. Invented under a defense grant in association with the Defense Advanced Research Projects Agency (DARPA) of the U.S. Department of Defense, BIT™ is registered with the U.S. Environmental Protection Agency (“EPA”) and uses a low percentage hydrogen peroxide as its only active ingredient to produce a fog composed mostly of a hydroxyl radical (.OH ion), known as ionized Hydrogen Peroxide (“iHP™”). Represented by the SteraMist® brand of products, iHP™ produces a germ-killing aerosol that works like a visual non-caustic gas.

TOMI introduced SteraMist® to the commercial market in June 2013. In June 2015, we successfully registered SteraMist® BIT™ as a hospital-healthcare disinfectant for use as a misting/fogging agent, at which time it became the first EPA-registered hospital-healthcare and general disinfectant registered solution and technology disinfection system on the market. TOMI’s products are designed to service a broad spectrum of commercial structures, including, but not limited to, hospitals and medical facilities, bio-safety labs, pharmaceutical facilities, meat and produce processing facilities, universities and research facilities, vivarium labs, all service industries including cruise ships, office buildings, hotel and motel rooms, schools, restaurants, military barracks, police and fire departments, and athletic facilities. TOMI products are also used in single-family homes and multi-unit residences. The Company is doing solid sales; On August 13 TOMZ reported its results for the second quarter of 2020. Total net revenue was $10,028,000 compared to $1,639,000, representing an increase of $8,389,000, or 512%. SteraMist® product-based revenues was $9,235,000 and $1,504,000, respectively, representing an increase of $7,731,000 or 514%. Net Income was $3,657,000, or $0.03 on a per share basis compared to a Net loss of  ($585,000), or ($0.00) on a per share basis, representing an increase of $4,242,000.

To Find out the inside Scoop on TOMZ  Subscribe to Microcapdaily.com Right Now by entering your Email in the box below 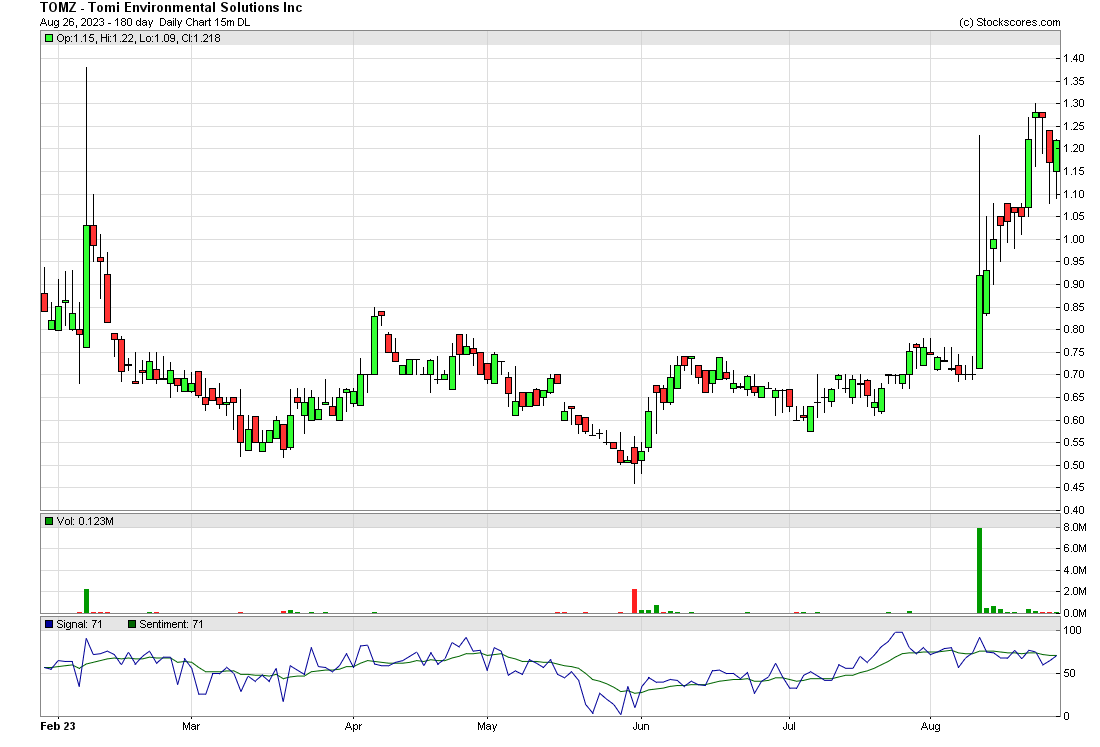 Microcapdaily first reported on TOMZ in February as the stock was running off its $0.06 base reporting at the time “he Company just had its SteraMist registered with the Chinese Center for Disease Control and Prevention and as CEO Dr. Halden Shane stated ´TOMI is working alongside many of our premier partners throughout Asia and, if needed, the world to bring SteraMist to those in need of the most effective disinfectant and decontaminant to fight coronavirus-Wuhan.”

BIT™ was developed in response to Amerithrax, the weaponized anthrax spore attacks that occurred in Washington, D.C. shortly after the September 11, 2001 U.S. terrorist attacks. BIT™ is a patented process that aerosolizes and activates a low concentration hydrogen peroxide solution, producing a fine aqueous mist (0.3-3 um in diameter) that contains a high concentration of Reactive Oxidative Species (“ROS”), mostly hydroxyl radicals (“.OH”). ROS cause damage to pathogenic and resistant organisms, such as bacteria, bacteria spores, viruses, mold spores, other fungi and yeast, via oxidation of proteins carbohydrates, lipids and rendering the building blocks of nature- amino acids, DNA and RNA inactive – leading to cellular death, disruption and/or dysfunction.

Currently moving higher TOMZ is that legendary runner that penny stock speculators dream about running from $0.06 range back in February when Microcapdaily first reported on it to recent highs near $. Now that TOMZ has dipped below the $1 mark Investors are accumulation again. TOMI’s Common Stock will commence trading on the NASDAQ Capital Market on October 1, 2020 under the ticker symbol “TOMZ.” TOMI sought to list its Common Stock on the NASDAQ Capital Market in an effort to enhance its visibility among investors and to attract a broader shareholder base. The move to the NASDAQ comes days after the Company affected a 1-for-8 reverse stock split of the outstanding shares of its common stock, par value $0.01 per share and cumulative, convertible preferred A stock, par value $0.01 per share. We will be updating on TOMZ when more details emerge so make sure you are subscribed to Microcapdaily so you know what’s going on with TOMZ.

Disclosure: we hold no position in TOMZ either long or short and we have not been compensated for this article.