GRN Holding Corp (OTCMKTS: GRNF) went into full beast mode last year after the new CEO took over the shell running to an incredible $2.22 in September. Since than the Company has made a number of acquisitions in the Cannabis space, as well as Drones, Financial Service, CBD and HEMP.

CEO Justin Costello is no stranger to the financial markets; he took over the shell in July 2019 and changed its name to GRN Holding Corp in November from Discovery Gold Corp. According to the July 22 8k “On June 20, 2019, GRN Funds, LLC, a Washington limited liability company, and its manager and Chief Executive Officer, Justin Costello, purchased a total of 139 million shares of the Registrant’s common stock representing 55.65% of this issued and outstanding shares, in a private transaction with Stephen Flechner and David Cutler. As a result of the closing of the transaction on June 25, 2019, GRN Funds, LLC and Mr. Costello acquired a majority of the issued shares eligible to vote. The total purchase price of $300,000 was paid in cash by GRN Funds, LLC. As a condition to the closing of the transaction, the Registrant’s Directors Mr. Stephen Flechner and Mr. Ralph Shearing resigned, and Mr. Flechner resigned as Chief Executive Officer and President, and Mr. Justin Costello was concurrently named Director of the Registrant, President and Chief Executive Officer.”

The Company says it has plans to up list to the OTCQB Venture Market to upgrade its position in the public markets and increase its visibility to a wider range of investors. CEO Justin Costello remarked: “Uplisting to OTCQB is an important milestone in the Company’s plan to grow and upgrade its position in the public markets. This move from the Pink Sheets will serve to enhance benefits to existing and prospective shareholders including higher reporting standards, greater access to analyst coverage and news services, and more comprehensive compliance requirements, while increasing our exposure to a broader investing audience.” 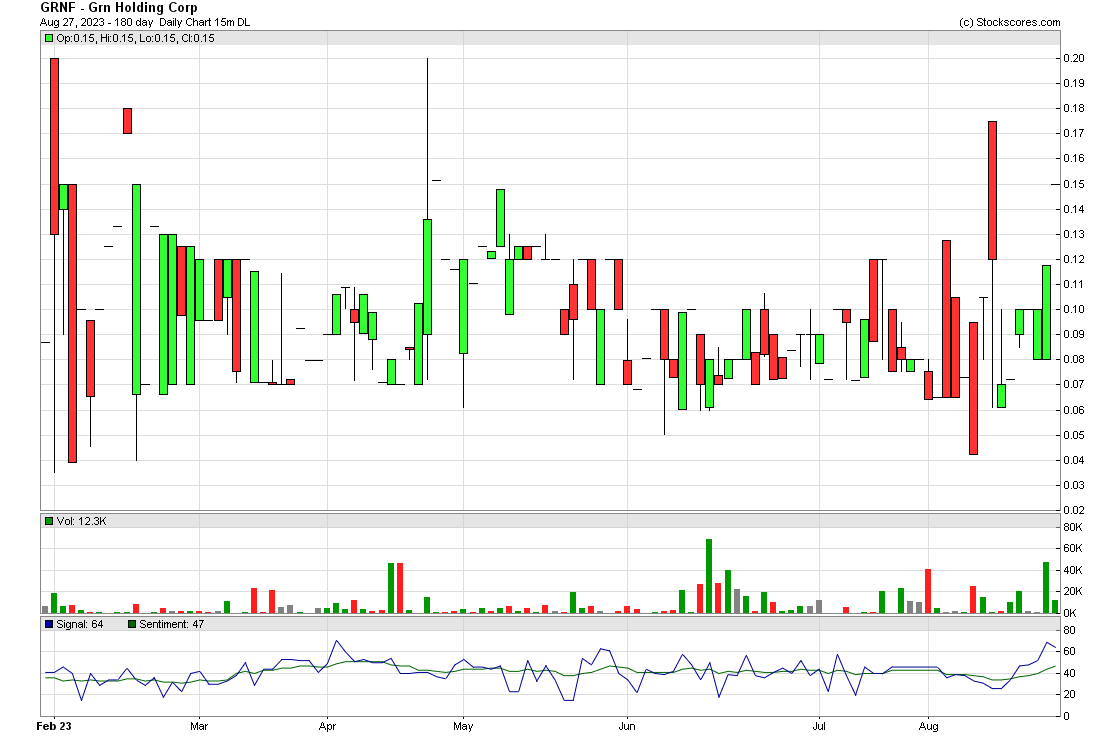 GRN has been putting out a flurry of press recently regarding acquisitions including Magic Beans Hemp, LLC. and the latest one Pacific Banking Corp (PBC). According to a February PR “Under the terms of the agreement, GRN Holding Corporation is acquiring all Pacific Banking Corp. infrastructure, source code, software, web interface, inventory, intellectual property, assets, and deposits under management.”  However, investors are still waiting for the accompanying 8ks for these transactions

Squad Drone located in Bellevue, Washington, offers delivery drone technology and services for the business-to-business (B2B) market. GRN acquired the Company and is trying to launch a delivery drone program which will license its drones and technology to state-registered hemp and cannabis companies to deliver business-to-business (B2B) orders. As part of the program, the drones will be equipped with CannaTrac’s cashless payment system to allow for closed-loop payments upon delivery.

According to GRN “The fleet of drones has been undergoing testing and customization for the industry over the last year and consists of six drones with a payload of up to 40 kilograms and delivery range of 10 km. The drones will be outfitted with a highly accurate advanced GPS navigation system and a digital signature interface. The drones will also be outfitted with the CannaTrac payment system for closed loop payments on delivery. The application will integrate with both producers/processors and retailers.”

Currently trading at a $147 million market valuation GRNF has no assets, no revenues and is debt free. The Company has been putting out a flurry of press regarding a number of important acquisitions however investors are still waiting for the accompanying 8ks for these transactions and experienced investors may point to GRNF lack of fundamentals to support current market valuation or price levels. GRNF continues to be a volume leader regularly topping $250k per day in dollar volume . We will be updating on GRNF when more details emerge so make sure you are subscribed to Microcapdaily so you know what’s going on with GRNF.