Exro Technologies Inc (OTCMKTS: EXROF) is making a powerful run up the charts in recent months attracting legions of shareholders and emerging as a volume leader in small caps. EXROF has run from a start point of $0.15 the stock has seen recent highs near $2 per share.

Exro  is getting ready to start negotiations on a commercial product for 2021. Exro’s Coil Driver technology can be added to an electric vehicle power train to make electric motors faster, stronger, and smarter. The electric bike field-tests results now indicate that Exro can be transformative for the quickly growing electric bike and electric scooter market.

Exro Technologies Inc (OTCMKTS: EXROF) is a Clean Tech company that has developed a new class of control technology for electric powertrains. Exro’s advanced motor control technology; “Coil Driver”, expands the capabilities of electric motors and powertrains. The Coil Driver enables two separate torque profiles within a given motor. Utilizing Exro’s patented motor coil switching technology as a foundation, the Company has developed a new battery cell management software technology called the Intelligent Battery Management System (“IBMS”). Exro is optimistic that IBMS can become a market leader in second life battery technology. Exro’s IBMS technology applies the principle of managing “energy” as it converts at the individual level to lithium ion  batteries.  Its topology of the system and intelligent algorithms control the battery cells at an individual level to extend life. For example, the new IEMS when fully commercialized, will allow for constant monitoring and manipulation of energy inflows and outflows, at rates of up to 100,000 manipulations per second. By utilizing the Company’s technology to manage the charge and discharge of energy at the individual cell level of a lithium ion battery, Exro aims to improve battery performance and efficiencies, which could result in longer usage and a second life battery application.

To Find out the inside Scoop on EXROF Subscribe to Microcapdaily.com Right Now by entering your Email in the box below 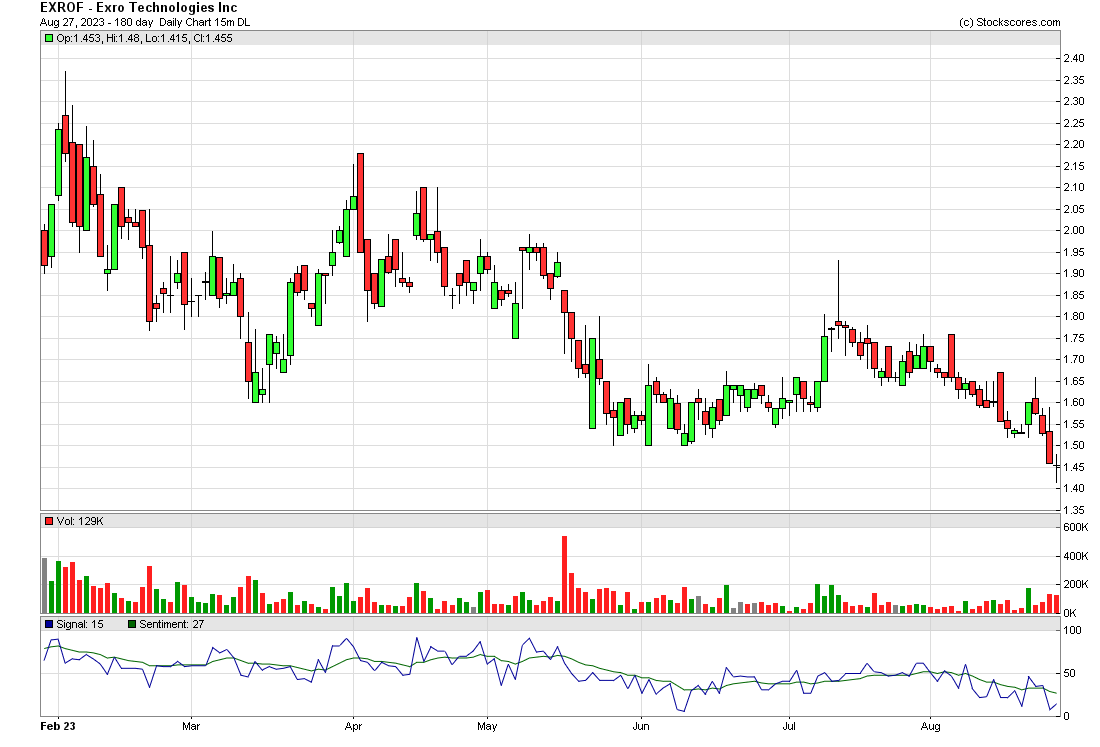 On October 7 Exro reported third-party testing has proven its patented Coil Driver technology dramatically improves performance of electric bikes. Motorino Electric, the Vancouver-based manufacturer and distributor of electric bikes and motorcycles, tested Exro’s technology through 2020 against a standard electric bike in the field. Testing found that the Exro-enhanced electric bike saw its performance increase by more than 20 percent, and up to 50 percent in climbing conditions. Exro will now start negotiations on a commercial product for 2021. Exro’s Coil Driver technology can be added to an electric vehicle power train to make electric motors faster, stronger, and smarter. The electric bike field-tests results now indicate that Exro can be transformative for the quickly growing electric bike and electric scooter market, which Allied Market Research reports will exceed USD $23 billion by 2025.

“This is an amazing breakthrough not just in electric bike technology but also for micro-mobility applications,” stated Sue Ozdemir, Chief Executive Officer of Exro. “We couldn’t be more excited. This changes the model for enhancing the performance of electric bikes and other micro-mobility applications, to ensure we get more from the energy we put into batteries. I’m looking forward to moving into product commercialization for next year.”

Currently running northbound EXROF is getting ready to start negotiations on a commercial product for 2021. Exro’s Coil Driver technology can be added to an electric vehicle power train to make electric motors faster, stronger, and smarter. The electric bike field-tests results now indicate that Exro can be transformative for the quickly growing electric bike and electric scooter market. The Company recently added Julie (McCoy) Wurmlinger, an accomplished engineering leader in the automotive industry and retired chief engineer from Ford motor company and President/Owner of OhmTek, LLC joined the Exro Board of Directors. We will be updating on EXROF when more details emerge so make sure you are subscribed to Microcapdaily so you know what’s going on with EXROF.