American Green Inc (OTCMKTS: ERBB) is making a powerful run northbound taking off out of the double zeroes on Friday, a day after the Senate unanimously approved “the Cannabidiol and Marihuana Research Expansion Act” which cleared the full chamber without debate. The bill streamlines the application process for researchers who want to study the plant and encourages the FDA to develop cannabis-derived medicines. Advocates and stakeholders are eagerly awaiting the formal introduction of the Cannabis Administration & Opportunity Act (CAOA) which will decriminalize marijuana at the federal level.

ERBB is one of the original pot stocks on the OTC, back when there were none and it has made a number of big moves whenever the sector heats up. In early 2021 when cannabis stocks got hot, ERBB skyrocketed from triple zeroes to $0.023 highs, a run we alerted early just as ERBB was taking off in December, 2020 and the stock has had similar runs in the past. Over the years ERBB has seen a tremendous transformation from a pipe dream with a nonfunctional vending machine into Company that has done many millions in revenues thanks to its successful “Sweet Virginia,” grow operation in West Phonex that continues to pump out booming harvests as seen on their YouTube channel. According to the quarterly report filed on February 12 ERBB did $565,000 in revenues for the 3 months ended, December 31, 2021 and $1.019 million for the 6 months ended December 31, 2021. ERBB has 3,847,765,733 shares outstanding out of 4.8 billion authorized. While ERBB has invested close to $5 million into their two grow facilities; Sweet Virginia and Cypress Chill, and has $440,000 in cash in the treasury they will need to seek additional funding in the future and judging by the past this will result in significant dilution to current shareholders.

American Green Inc (OTCMKTS: ERBB) operating out of Phoenix, Arizona is among the original pot stocks starting back in 2009 when ERBB became America’s second publicly-traded company in the cannabis sector. American Green now, with its more than 50,000 certified beneficial shareholders, is one of the largest (in shareholder count) in the cannabis sector.  American Green’s mission is to lead the cannabis and premium CBD industry. ERBB has seen significant growth as a Company in the cannabis space and has several new initiatives on the way. Besides the grow operations and the vending machines they are working on several cannabis apps, have a shop open on Amazon Marketplace for apparel as well as an online store front for Organic Hemp derived CBD.

ERBB operates a 12,000 sq ft modern and very efficient grow facility in West Phoenix, Arizona called “Sweet Virginia,” that really transformed this Company from a pipe dream with a nonfunctional vending machine into Company that has done millions in revenues. Management has invested around $3 million in the space; at one point the Company won a lawsuit against the building owners who were trying to increase the rent. American Green recently started another grow operation in Phoenix in a 37,000 square foot facility called the Cypress Chill that has room for significant expansion. In August 2021 the Phoenix city council approved the Company’s request to utilize the space as a cannabis grow facility. Currently completing construction ERBB says the facility will be ready to start growing in early 2022. The Company also subleases a warehouse space from Vendweb, Inc where they produce the smart vending machines called the American Green Xpress as well as their other models.

I would like to point out that a past shareholder of ERBB responded to this article and he had nothing but terrible things to say about ERBB past and management.

Been holding this one past couple months $ERBB is a former runner for potential in any #MJ news pic.twitter.com/8mslh7RspO 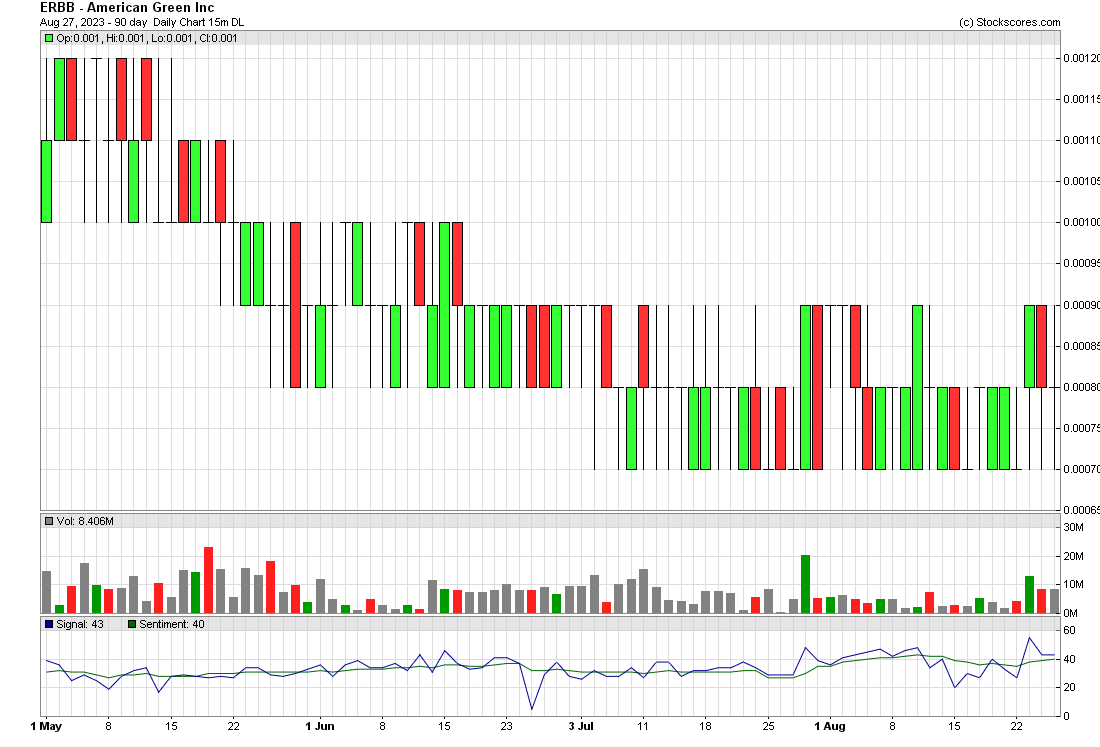 ERBB just put out news on March 21 reporting the final phase of demolition is completed at its new cannabis grow building and that its architectural team will self-certify their building plans at the “Cypress Chill,” grow operation to ensure a faster approval from the City of Phoenix.

American Green president, David G. Gwyther said, “The strategic decisions which we have recently made by choosing to self-certify the architectural plans to speed up the completion of Cypress Chill and to install a top-of-the-line, custom-engineered, reverse osmosis water purification system manufactured by the Suez Group show that we are consistently making progress with the development of our existing warehouse into a state-of-the-art grow facility. We are extremely happy with where we are today including the completion of the inside demolition at ‘Cypress Chill.’ ”

While the custom design of the Suez system required American Green to change its architectural plans now, it allowed them to avoid any “change fees” and the time delays it would have incurred if it waited to submit the plan changes after they were submitted to the City of Phoenix. Plan submission will occur in May and this will have little or no effect on the goal of completing final construction by the end of the year since self-certifying the plans speed up the construction process.

We have been reporting on ERBB for many years, the stock is one of the original pot stocks from back in the day and at that time did not have much of a business as they do now. On December 6, 2020 we reported on ERBB just as the stock was moving out of the triple zeroes on its way to #$0.023 highs. Here is the intro to that article: “American Green Inc (OTCMKTS: ERBB) is making a powerful run-in recent weeks off its triple zero lows to highs near a penny. The stock has emerged as a volume leader as Arizona legalized cannabis for recreational use. American Green’s “Sweet Virginia” Cannabis Grow Operation recently surpassed $3,000,000 in total sales revenues since opening and is operating profitably. ERBB management division was given the green light to expand its current cannabis production by 300% in 2021.  The current grow management in Phoenix, at the company’s flagship operation “Sweet Virginia,” have proven successful in both profitability and in developing a well-earned reputation producing consistently high-quality cannabis in high demand.

Currently trading at a $16.9 million market valuation ERBB has seen a lot of growth through expansion, currently building out its 2nd grow facility and the convertible debt-based financing to pay for this growth has resulted in significant dilution. ERBB has 3,847,765,733 shares outstanding out of 4.8 billion authorized. While ERBB has invested close to $5 million into their two grow facilities; Sweet Virginia and Cypress Chill, and has $440,000 in cash in the treasury they will need to seek additional funding in the future and judging by the past this will result in significant dilution to current shareholders. ERBB is a cannabis stock to watch here, as the sector heats up and it looks like it will, ERBB has a good chance of repeating previous moves anytime cannabis stocks saw a boost of attention. Management has proven they can grow good cannabis flower at the 12,000 sq ft Sweet Virginia grow facility and they should be able to vamp up production when the new 37,000 sq ft Cypress Chill facility is operational in the coming months. Also  they should be able to dwarf the $170,00 a month they are currently bringing in from just the Sweet Virginia facility. We will be updating on ERBB on a daily basis so make sure you are subscribed to microcapdaily.com so you know what is going on with ERBB.