Brazil Minerals, Inc. (OTCQB: BMIX) is starting to heat up trading $200,000 in dollar volume on Friday up 7% on a day the DOW dropped 880 points. The stock has been trending northbound ever since reversing off $0.0039 in May and is current breaking into copper land. BMIX has a history of big moves running to $0.10 in early 2021. The Company recently filed an 8-K/A regarding its 46.17% owned Apollo Resources Corporation 259.56-hectare Rio Piracicaba Iron Project in the municipality of Rio Piracicaba, state of Minas Gerais in Brazil, located 130 km from Belo Horizonte, capital of the state of Minas Gerais, and is served by paved roads and is also intersected by a railroad used by several mining companies to transport iron ore to the coast. The filing can be found here. BMIX also filed a S-1/A regarding the application to up list its shares to NASDAQ. BMIX Minas Gerais Lithium Project intersects the property of a large publicly traded lithium miner that has demonstrated through extensive drilling the presence of lithium deposits totaling over 20 million tons, according to its publicly available filings. The Company recently identified the existence of hard rock pegmatites with lithium mineralization and is currently waiting on a technical report from SLR International Corporation in late-June 2022.

Brazil Minerals is looking to produce lithium-bearing concentrate, highly sought after in the battery supply chain for EVs. BMIX also has 100%-ownership of early-stage projects and properties in other minerals that are needed in the battery supply chain and high technology applications such as rare earths, titanium, nickel, and cobalt. Additionally, BMIX has 100%-ownership of several mining concessions for gold and diamonds. The Company’s goal is to become “the Mineral Resources Company for the Green Energy Revolution”.  As gas prices continue to rise and more EV vehicles are manufactured the price of Lithium will continue to rise and Companys such as BMIX with large lithium deposits will be in demand. BMIX has been steadily increasing the land size of its mining claims in Brazil and currently has 60,077 acres in lithium claims, 30,009 acres for rare earths, 22,050 acres for titanium, 14,507 acres for graphite, and 57,900 acres for nickel. BMIX also owns equity stakes in both Apollo Resources Corporation, a private company developing its first iron mine, and Jupiter Gold Corporation (OTCQB: JUPGF), a fully reporting OTCQB listed company developing a quartzite mine and advancing two gold projects. Brazil Minerals, Inc. (OTCQB: BMIX) is a U.S. mineral exploration and mining company with projects and properties in essentially all battery metals to power the Green Energy Revolution – lithium, rare earths, graphite, nickel, cobalt, and titanium. The Company’s current focus is on developing its hard-rock lithium project located in a premier pegmatitic district in Brazil – as lithium is essential for batteries in electric vehicles. Additionally, through subsidiaries, BMIX participate in iron, gold, and quartzite projects. The Company also owns multiple mining concessions for gold, diamond, and industrial sand.

The Company is led by CEO Marc Fogassa, a high-level executive with extensive experience in venture capital and public company chief executive management. He has served on boards of directors of multiple private companies in various industries, and is a regular speaker internationally. Mr. Fogassa graduated with two Bachelor of Science degrees from MIT and from Harvard Medical School with a Dr. of Medicine. Mr. Fogassa owns 2,877,789,671 shares of BMIX. Brazil Minerals is primarily focused on advancing and developing its hard-rock lithium project located in the state of Minas Gerais, Brazil, where some of the Company’s high-potential mineral rights are adjacent to or near large lithium deposits that belong to a large, publicly traded competitor which has demonstrated through extensive drilling the presence of lithium deposits totaling over 20 million tons, according to its publicly available filings. The Company’s Minas Gerais Lithium Project is its largest endeavor and consists of 44 mineral rights spread over 74, 531 acres and predominantly located within the Brazilian Eastern Pegmatitic Province which has been surveyed by the Brazilian Geological Survey and is known for the presence of hard rock formations known as pegmatites which contain lithium-bearing minerals such as spodumene and petalite. In general, lithium derived from pegmatites is less costly to purify for uses in high technology applications than lithium obtained from brine. Such applications include the battery supply chain for electric vehicles (“EVs”), an area of expected high growth for the next several decades.

The Company’s exploratory work to date in some mineral rights in its Minas Gerais Lithium Project, including trenching and drilling with subsequent geochemical analysis of samples, has determined the existence of hard rock pegmatites with lithium mineralization. Given the proximity to areas of economically significant lithium deposits from the Competitor who has demonstrated through extensive drilling the presence of lithium deposits totaling over 20 million tons, according to its publicly available filings. BMIX technical experts believe that one or more areas of its Minas Gerais Lithium Project may also contain similar lithium deposits. 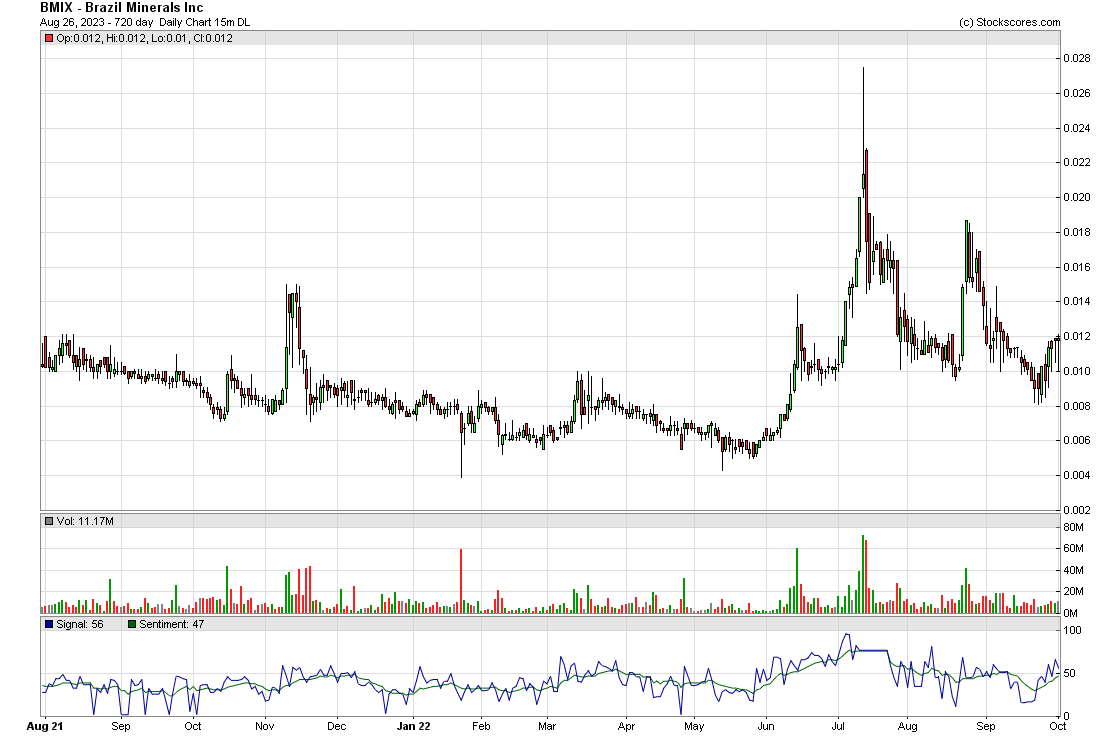 Brazil Minerals primary goal for the use of proceeds from the Companys offering, which is dependent on the Company’s bid to list on the NASDAQ stock exchange is accepted will be the identification and quantitative measurement of its prospective lithium deposits. BNA Mining Solution and GEO Geologia e Engenharia two independent technical advisory firms with expertise in lithium, are planning and supervising the exploration program for Brazil Minerals Minas Gerais Lithium Project. Together, BNA and GEO count in their staff three lithium experts which meet the “Qualified Persons” definition under Item 1300 of Regulation S-K. An independent preliminary exploration technical report of the Company’s Minas Gerais Lithium Project has been prepared by GEO with information related to initial studies, mostly trenching and shallow drilling, performed in certain of the project areas. This report confirms presence of spodumene and petalite, minerals that contain lithium. Currently, a second phase of the exploration is underway with deeper drilling of specific targets. Preliminary results from work performed during the first quarter of 2022 demonstrate the existence of at least three mineralized bodies containing litiniferous spodumene in one of our mineral rights that is part of our Minas Gerais Lithium Project. Two of such mineralized bodies are in proximity whereas the third one is approximately 700 feet away. Separately, the exploratory team has identified in this same mineral right multiple other pegmatites which have not been explored yet, some of which already demonstrate high potential for litiniferous spodumene.

Given robust results obtained in the exploration drilling campaign, during the second quarter of 2022 BMIX engaged SLR International Corporation for the completion of an initial Technical Report Summary (“TRS”) compliant with Item 1300 of Regulation S-K on the Company’s 100%-owned Das Neves Lithium Project, located in Araçuaí, Minas Gerais, Brazil. Our Das Neves Lithium Project is immediately adjacent to a lithium area owned by the Competitor company mentioned above. BMIX expects to receive such initial TRS of its Das Neves Lithium Project from SLR in late-June 2022.

Management believes it can materially increase the Company’s value by the acceleration of exploratory work and quantification of Brazil Minerals lithium mineralization. The Company’s initial commercial goal is to be able to enter production of lithium-bearing concentrate, a product which is highly sought after in the battery supply chain for EVs. BMIX also has 100%-ownership of early-stage projects and properties in other minerals that are needed in the battery supply chain and high technology applications such as rare earths, titanium, nickel, and cobalt. The Company’s goal is to become “the Mineral Resources Company for the Green Energy Revolution”. Management believes the shift from fossil fuels to battery power will yield long-term opportunities for the Company not only in lithium but also in such other minerals. Additionally, BMIX has 100%-ownership of several mining concessions for gold and diamonds. Recently, BMIX obtained the presumptive exploratory permits for six additional nickel mineral rights encompassing 29,075 acres in the state of Goiás in Brazil. One of these rights is adjacent to a nickel producing mine and all are in a district known for lateritic nickel deposits. With such additions, Brazil Minerals’ nickel mineral rights holdings have more than doubled to 57,900 acres (234 km2).

Currently trading at a $29,323,110 market valuation BMIX has 3,370,472,433 shares outstanding of which 1,222,982,873 are restricted, leaving 2,147,489,560 free trading BMIX shares. The Company has $1.8 million in assets and under $1 million in debt. *Not including equity stakes in Apollo Resources, and Jupiter Gold Corporation (OTCQB: JUPGF) BMIX traded as high as $0.10 in early 2021 and recently reversed off $0.0039 lows after the seller that decimated the share price in recent months closed out their position. The stock has been moving up steadily as the Company waits on a technical report on its high value Minas Gerais Lithium Project from SLR International Corporation in June 2022. BMIX Minas Gerais Lithium Project intersects the property of a large publicly traded lithium miner that has demonstrated through extensive drilling the presence of lithium deposits totaling over 20 million tons, according to its publicly available filings. Currently under heavy accumulation with little sellers, BMIX is breaking out into copper land with a significant gap to fill from current levels. BMIX was up 7% on Friday trading over $200,000 in dollar volume as the DOW slipped 880 points on the day. We will be updating on BMIX when more details emerge so make sure you are subscribed to Microcapdaily.

Disclosure: we hold no position in BMIX either long or short and we have not been compensated for this article.