Global Developments, Inc (OTCMKTS: GDVM) On the Move as Co Reduces OS by 525 million and Makes Moves Behind the Scenes

Global Developments, Inc., (OTCMKTS: GDVM) is making an explosive move northbound as things are picking up behind the scenes that certainly look as if the Company is planning something here such as a reverse merger of an existing business into the Company. GDVN is working to get their filings updated and there was just a 515 million share reduction as the shares issued to OMID were returned to the treasury and cancelled. GDVM is the perfect merger candidate; the Company a clean balance sheet with just $36k in total liabilities. On Monday alone GDVM was up 40% on $440,000 in dollar volume suggesting something is in the works here.

Reverse merger stocks can be more explosive than biotech’s when the incoming Company has real value but is undiscovered to investors and we have covered many on the website that have gone from pennies to dollars. Two recent RM runners that stand out are TSNP which went from sub pennies (where we first wrote about it) to several dollars per share. The other is HRBR which went from a few cents (where we first wrote about it) to $3 plus. While nothing official has been announced as of yet there is a lot of things happening behind the scenes here and some large players in small caps re currently accumulating GDVM.

$GDVM This was the deal with the $OMID shares. They had “zero involvement” with $GDVM so shares were returned which lowered both the OS and restricted. 👌👌 https://t.co/uHXByqsYL4 pic.twitter.com/inTspuUwHz

To Find out the inside Scoop on GDVM Subscribe to Microcapdaily.com Right Now by entering your Email in the box below 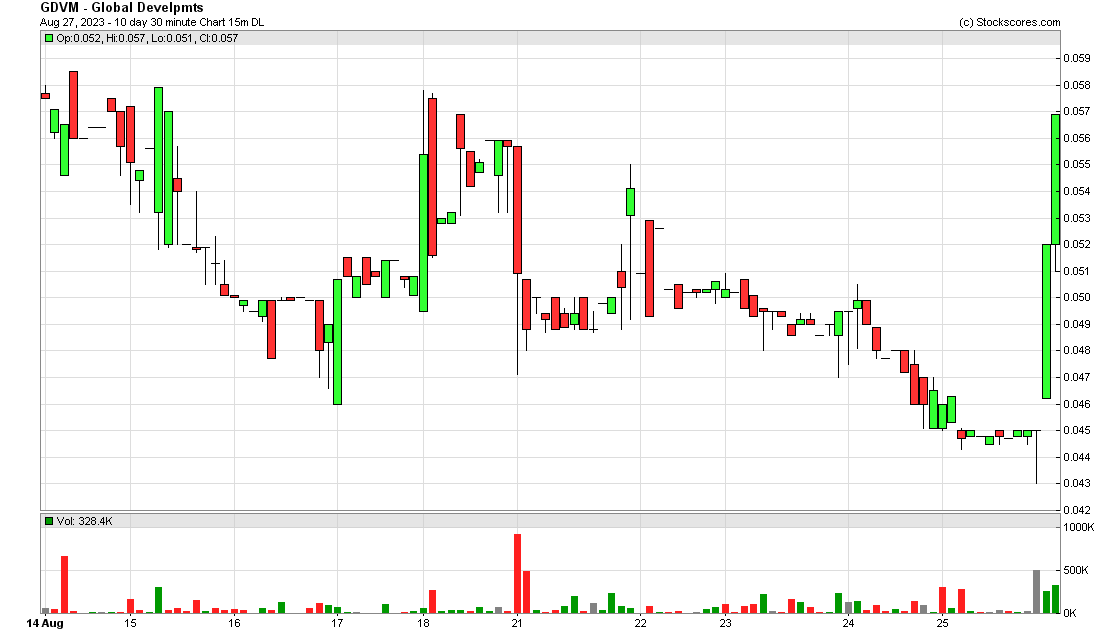 The Company’s majority stockholder owns 3,150,000,000 shares of the Company’s common stock, which represents 76.56% of all shares of common stock issued and outstanding. The majority stockholder has agreed to loan the Company up to an aggregate of $50,000 by the issuance of an unsecured promissory note to cover expenses of the Company. The loan is repayable upon demand. As of March 31, 2022, the Company has recorded $27,269 in related party notes payable, which relates to transfer agent fees, accounting services, state franchise taxes, and OTC Markets fees.

$GDVM – Nice steady volume. People putting their toes in, next they will jump in headfirst ⛱⛱ pic.twitter.com/sIIpaiFx8t

Currently trading at a $16 million market valuation GDVM just lowered the OS by 525 million shares leaving 3,589,387,836 shares outstanding. The Company’s majority stockholder owns 3,150,000,000 shares meaning this one is very tightly held with just 324,744,968 unrestricted shares and a small float. While nothing official has been announced as of yet there is a lot of things happening behind the scenes here and some large players in small caps are currently accumulating GDVM here with an eye on a possible reverse merger. On Monday alone GDVM was up 40% on $440,000 in dollar volume suggesting something is in the works here. We will be updating on GDVN when more details emerge so make sure you are subscribed to Microcapdaily.

Disclosure: we hold no position in GDVM either long or short and we have not been compensated for this article.