Global Tech Industries Group Inc (OTCMKTS: GTII) is a massive short covering rally that we covered here when the stock was well under $1 back on August 30, since than GTII has rocketed up to highs of $8.97 before a significant pull back and a new base at $5 per share. As we stated in our August 30 article on GTII “. While we don’t want to get too involved in this situation so we won’t be saying any names word is that there is a single short on GTII that is 100 million shares short and is about to be in serious trouble.” The shorts are now in serious trouble and they are trying every trick in the book to keep the price down and they are failing.

The Company announced on October 6 that is has “no way of knowing why the market reacted as it has in the last several weeks, it believes it is mostly due to the fact that, as the market price became closer to and then passed the strike price of $2.75 to purchase Warrants, more buyers entered the market. The company distributed Warrants to its shareholders last April 6, 2021, which allowed shareholders to exercise one Warrant for every ten shares of stock held. As the Company’s float is over forty million shares, this could account for the increased activity, although, as the Company clearly disclosed last year, the Warrants did not transfer with the underlying shares of common stock after the record date.

Global Tech Industries Group Inc (OTCMKTS: GTII) is a publicly traded, mini conglomerate, trading on the OTC markets. The Company’s subsidiaries and affiliates include intellectual properties, proprietary systems, and trade secrets in the bioscience, green-tech, and global health technologies, among other new and emerging businesses. Global Tech can provide the protective umbrella of a publicly listed, fully compliant SEC-audited company to acquisition candidates, as well as structure, transparency, potential capital raise and significant growth potential. Global Tech can deliver the means, through incubation, for private companies to become public entities in good standing.

GTII is in the process of animating a digital platform, formed together with Alt5 Sigma, for the purpose of acquiring fine art and other collectibles that will be tokenized and eventually issued to its shareholders as Tokenized value dividends. This undertaking signifies a new and revolutionary method for offering value to GTII shareholders and as a way of participating in the shared ownership of fine art and collectibles using Non-fungible tokens.

Mr. Ronald Cavalier, founder of Cavalier Galleries Inc., a group of four art galleries, with locations in Greenwich, CT, New York City, Nantucket Island, and Palm Beach, FL. was retained in April 2021 by GTII as an expert consultant in the procurement and purchase of fine art for the digital platform project. Mr. Cavalier engineered the purchase of an original Picasso at a Phillips Auction House in New York City.

The picture, ‘Quatre femmes nues et tete sculptee’ was executed in 1934 on Montval laid paper and published by A. Vollard, Paris, in 1939. It is signed in pencil, from the edition of 260 and numbered ‘347’ in the Henri Petiet inventory system in the lower left corner. Picasso’s signature can be seen in the lower right corner. This purchase will function as the cornerstone of GTII’s digital fine art and collectibles platform and be the first of several potential acquisitions. The move to purchase such a celebrated and valuable piece of fine art demonstrates GTII’s commitment to the digital platform undertaking.

GTII is working with Alt5 Sigma, a digital assets trading, exchange and custodian services provider headquartered in New York City, to construct and stage the platform to allow shareholders and the public to set up ‘digital wallets’ for the purpose of investing in fine art and collectibles using non-fungible tokens. Alt5 Sigma has already started its work in tailoring GTII’s digital platform to the Company’s needs and is working to tokenize the newly acquired Picasso.

So all the games to keep it low all day. I can't wait to see short number.

Every other short sale is under water (basically every one). But shorts qre willing? PLUS COSTS. GFYM LMAO

To Find out the inside Scoop on GTII Subscribe to Microcapdaily.com Right Now by entering your Email in the box below 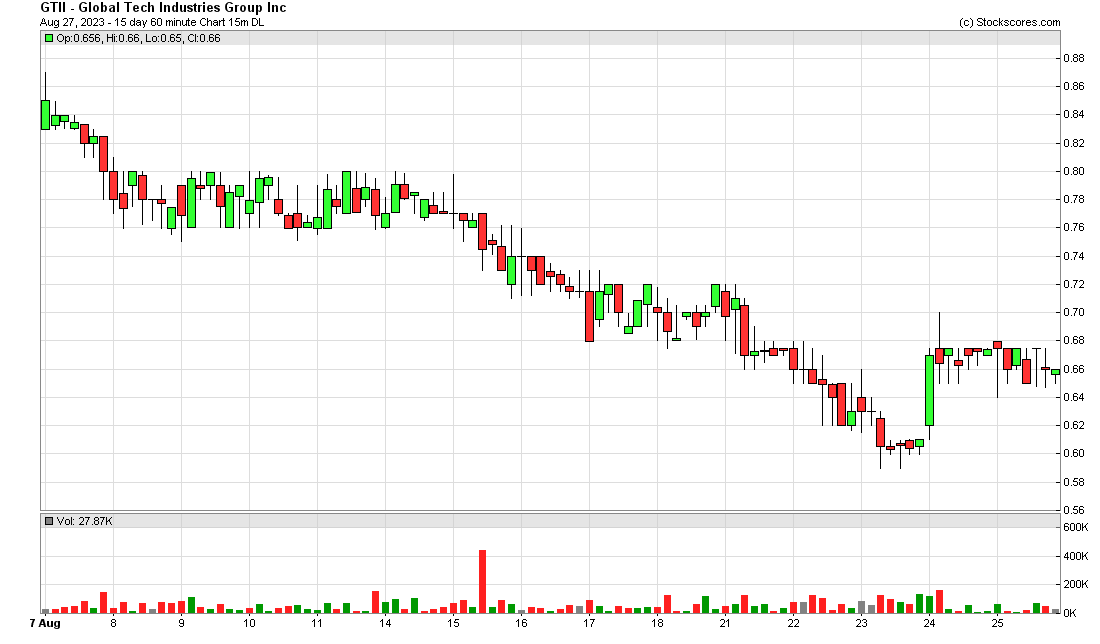 On October 6 GTII announced, in response to inquiries from the OTCMarkets, it will summarize its understanding of recent activity in its stock over the past several weeks, as follows:

While the Company has no way of knowing why the market reacted as it has in the last several weeks, it believes it is mostly due to the fact that, as the market price became closer to and then passed the strike price of $2.75 to purchase Warrants, more buyers entered the market. The company distributed Warrants to its shareholders last April 6, 2021, which allowed shareholders to exercise one Warrant for every ten shares of stock held. As the Company’s float is over forty million shares, this could account for the increased activity, although, as the Company clearly disclosed last year, the Warrants did not transfer with the underlying shares of common stock after the record date. The Company also recently announced that on September 14, 2022, it signed a binding Stock Purchase Agreement (“SPA”) with Wildfire Media, Corp (“Wildfire”). The Company and Wildfire first signed a non-binding Letter of Intent (“LOI”) on March 2, 2022. The due diligence has been progressing since then.

The company’s directors, some of whom are officers, recently sold stock under a 10B5 plan, which was first discussed at the board level on August 19, 2021. The board tasked two directors to find and construct an appropriate compensation plan for them, as they had been operating as board members without being paid any cash fees for the last ten years. The 10B5 plan was finalized and signed by the board on June 23, 2022, and allows for the sale of 1% of each directors’ holdings, spread over the course of one year on a monthly basis. The paperwork and documentation for the 10B5 plan was recently completed, and the first sale occurred in October 2022.

Currently trading at a $1.3 billion market valuation GTII OS is 258,278,599 shares, a float of around 53 million shares in the float and a massive 100 million share short position from one trader who is sriously under water. After a brief shake Tuesday morning to $4.69 lows GTII steadily rose for the rest of the day closing $0.02 under the HOD. The steady upward climb seen Tuesday certainly looks as if GTII is getting ready to make a move and embark on another wave northbound with little resistance and $8.97 looming large. A break over and GTII could go far. As we said in our August 8 article: “The buzz on GTII is deafening and picking up steam as we all remember WallStreetBets and the AMC Gamestop massive short covering rallies last year which well deservedly took down a hedge fund with it who was so stupid he was shorting GME under $10 per share.”We first covered GTII in August when the stock was still well below the $1-mark. We will be updating on GTII when more details emerge so make sure you are subscribed to Microcapdaily.

Disclosure: we hold no position in  GTII either long or short and we have not been compensated for this article