Mass Megawatts Wind Power ( MMMW (OTCMKTS) is making a parabolic move northbound in recent trading quickly turning into one of the fastest moving stocks in small caps. The time could not be better for MMMW to be running with a renewed interest in solar and the administration unveiling new funding for domestic solar manufacturing. MMMW has a history of explosive moves running from well under a penny to highs of $0.48 in early 2021. Now trading for pennies MMMW is running northbound at a rapid rate, the stock is under heavy accumulation and the short position is desperately trying to cover their positions.

Tomorrow there is a Twitter Spaces Interview with Jon Ricker CEO of @MegawattsWind on https://twitter.com/RadioSilentplay This follows the recent news that MMMW has joined the Corridor 9/495 Chamber of Commerce in its effort to expand sales opportunities with the Chamber’s marketing outlets and new business opportunities provided by the Chamber.  Advertising with their social media outlets and its networking opportunities are additional important benefits for member companies. Other Chamber resources include job listing services and accounting related benefits.

Mass Megawatts Wind Power ( MMMW (OTCMKTS) is a leader in the development of a revolutionary renewable power technology, bringing a product to the renewable energy marketplace capable of producing electricity at a cost 25% lower than other renewable power equipment. The new technology puts Mass Megawatts electricity generation on a competitive footing with fossil fuels, such as coal and natural gas. The Company is building out its patented wind energy generated power plants utilizing proprietary MultiAxis Turbine technology. The Company expects to sell the generated electricity to the power commodity exchange on the open market, initially in California. Mass Megawatts is recognized as the vendor of choice for utilities, communities, businesses and other wind power generation adopters who are seeking a lower cost, community friendly, renewable energy solution. MAT technology is readily accepted by local communities, where resistance to ‘tall tower’ wind farms is legendary. Ranging between 50 feet to a maximum of 80 feet in overall height, MAT units boast extremely productive generation capability in areas with lower wind speeds, where ‘tall tower’ utility-scaled projects simply are not financially feasible or successful. The Company’s equipment is rated to withstand winds of up to 120 mph, with all mechanical and electrical components located close to ground level. Projected maintenance costs are 50% less than the wind power industry’s average. The geographic footprint of lower wind speed regions both suitable and profitable for MAT technology is several times greater than that of ‘tall tower wind,’ with its requirement for extremely high wind resources.

$MMMW DD Megawatts leader in development of a revolutionary renewable power technology, bringing a product to the renewable energy marketplace capable of producing electricity at a cost 25% lower than other renewable power equipment. https://t.co/oAOQPrltIP https://t.co/SMiyZe6tNd pic.twitter.com/3qLmrzrDg9

To Find out the inside Scoop on MWWW Subscribe to Microcapdaily.com Right Now by entering your Email in the box below 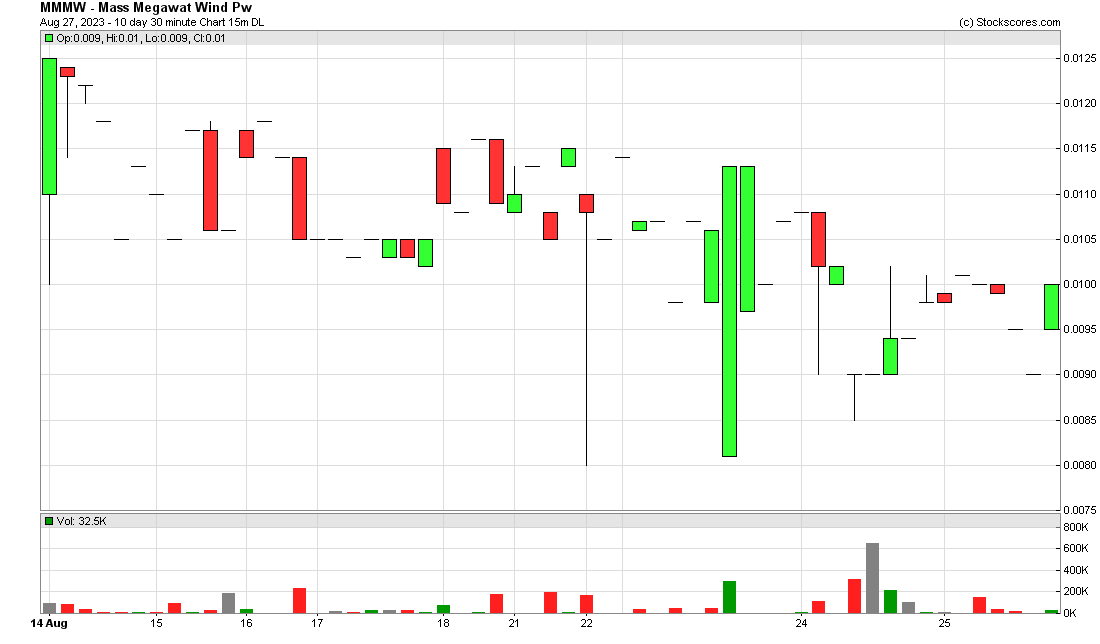 In recent financial related news, Mass Megawatts became a Full SEC Reporting Company on July 7,2022. The reporting requirements will generate better transparency with the investment community. The Company recently filed a Form 10 registration statement and amended Form 10 registration statements to register its common stock, no par, under the Securities Exchange Act of 1934 as amended. The ongoing filings as a full reporting company will provide more detailed business and financial information of the Company with its future reporting requirements.

The Company also recently reported the best cash position in its corporate history allowing the opportunity for achieving its goals of producing sales toward the path of profitability. The Company can move forward with new product manufacturing and a few small commercial sales of the new patent pending solar tracker. The use of solar trackers is known to reduce the cost of solar powered electricity. Although Mass Megawatts is aiming to achieving a very small fraction of global demand, the solar tracker market is anticipated to be worth more than $3 billion by 2025 expanding from the current market size of about $2 billion. Mass Megawatts sees an opportunity to be part of the growing solar tracker market with a lower cost product than the trackers marketed by other solar tracker companies in this high growth segment of the solar energy market.  A solar tracker is a method of tracking the sun throughout the day for a photovoltaic (PV) system with the purpose of increasing energy output throughout the day. The market is anticipated to have substantial growth due to the growing need for renewable energy.

Mass Megawatts is finalizing efforts to bring a new Solar Tracking technology with more electric cost savings for its customers in comparison to its stationary units. The patented pending, Mass Megawatts ‘Solar Tracking System’ (STS) is designed to improve solar-energy production while and at the same time reduce material and installation cost.

The patented pending, Mass Megawatts ‘Solar Tracking System’ (STS) is designed to automatically adjust the position of solar panels throughout the day to receive an optimal-level of direct sunlight. Unlike other solar tracking technologies, the Mass Megawatts STS utilizes a low-cost structure that adds stability to the overall system while also improving energy production levels. The STS also uses a proprietary mechanical innovation to limit dynamic and static loading on the tracker, which can occur during periods of high wind and extreme weather, in order to reduce wind-related stresses and system downtime. The STS allows Mass Megawatts to lower the cost of material and reduce the number of solar panels needed to generate the rated capacity. Due to this advantage, Mass Megawatts can deliver more solar power production at a price similar to lower-capacity, stationary systems.

Currently trading at a $4 million market valuation MMMW has 137,764,579 almost maxed out OS with a tiny float of just 67,877,792 shares. The Company is virtually debt free and recently uplisted to fully reporting OTCQB. MMMW is an exciting story in small caps that is currently under heavy accumulation. With its patent pending, Solar Tracking System and Wind Electric Power Generation system and very little debt. Mass Megawatts believes it is well positioned for expanded production and supporting its revenue generation goals in the longer term. Catch the interview tomorrow on Twitter Spaces with Jon Ricker CEO of @MegawattsWind on https://twitter.com/RadioSilentplay. The last time MMMW ran it went from current levels to $0.48 per share. We will be updating on MWWW so make sure you Subscribe to Microcapdaily.

Disclosure: we hold no position in MWWW either long or short and we have not been compensated for this article.