NaturalShrimp Inc (OTCMKTS: SHMP) is up big after the Company signed a definitive agreement with Yotta Acquisition Corporation (NASDAQ: YOTA) for a proposed merger of the two companies. Under the Business Combination Agreement, NaturalShrimp will merge with a wholly owned subsidiary of Yotta. The companies intend for Yotta’s common stock to continue to be listed on the Nasdaq Capital Market. Assuming no redemptions by Yotta public stockholders, upon closing, the combined entity could have access to as much as $105 million in net cash from the Yotta trust account. Final proceeds will depend upon redemption rates of current Yotta stockholders at the consummation of the proposed Transaction.

SHMP management believes that a move to the Nasdaq will help elevate the Company’s public profile, expand its shareholder base, improve liquidity and enhance shareholder value. NaturalShrimp has built the largest U.S. shrimp indoor Recirculating Aquaculture System using the Company’s patented platform technologies and has worked to test and independently validate these technologies to support potential joint venture and licensing opportunities.  The stock has been running northbound with power over the past few weeks after reversing off $0.07 52 week lows in September.

NaturalShrimp Inc (OTCMKTS: SHMP) mission to produce fresh, land-based gourmet-grade shrimp without the use of antibiotics, probiotics or toxic chemicals continues to build momentum. The Company boasts increasing production and sales, new developments for its Hydrogas and Electrocoagulation technologies’ independent trials, and rising interest from the investment community. SHMP is headquartered in Dallas, with production facilities located near San Antonio, Texas and Webster City, Iowa. The Company has developed the first commercially viable system for growing shrimp in enclosed, salt-water systems, using patented technology to produce fresh, never frozen, naturally grown shrimp, without the use of antibiotics or toxic chemicals. NaturalShrimp systems can be located anywhere in the world to produce gourmet-grade Pacific white shrimp.

Natural Aquatic Systems is a majority owned NSI company established in 2017 to address the growing requirement for our indoor shrimp farming capabilities for all aquatic species. In 2017, the aquatic based protein global marketplace was in excess of $175 billion. The United States is a minor aquaculture producer, ranked 16th in 2016, but it is the leading global importer of aquatic protein. By value, nearly 90 percent of the seafood we eat comes from abroad, over half of it from aquaculture. These overseas companies are government subsidized, have low labor costs, and a reduced regulatory oversight. Because of these low cost imports, the U.S. seafood trade deﬁcit (East Asia only) has grown to $14 billion in 2016. That ideal solution for the US market is an offering that is environmentally sustainable, food safe, can be located anywhere, and is not hindered by existing super intensive production technologies and razor thin margins. SHMP has ramped its sales and has significantly increased its distribution footprint in Illinois and Texas and is driving an average margin above 40%. The live haul market certainly delivers very high return, and its customers support the Company’s strategy.  SHMP is focused on key regional markets and the demand is strong. SHMP current Company projections foresee reaching $1million in cumulative sales by end of 2022.

Several weeks ago, SHMP announced an update to its planned Florida shrimp production facility. The visit included meeting with the County engineer to review the overall site plan and layout for a 180,000 square foot facility and to perform a site inspection. The NaturalShrimp team will next provide the internal building layout and requirements designed specifically for the Florida site location to the County Architect for development of a set of construction drawings. This facility will serve as a model when constructing future facilities using the Company’s patented electrocoagulation and Hydrogas technologies as successfully demonstrated at its Texas and Iowa facilities.

The Company also gave an update on its online ordering home delivery program. NaturalShrimp’s Harvest-Select online retail store is expected to launch in early November, just in time for the holiday season. NaturalShrimp Chef and Director of e-commerce Douwe Iedema is leading the program and will also be offering his unique NaturalShrimp sauces and spices. Product availability at launch will include fresh harvested heads-on shrimp and Chef Douwe’s long-awaited shrimp cocktail sauce. Recipe books and instructional videos for the home cook will be available as well. The NaturalShrimp Distribution Center located within the Dallas-Fort Worth metroplex is also nearing completion and will enable the Company to receive and process its product for packaging and shipping for the online ordering home delivery program. Multiple test shipments have been successful after completing package testing for various products, including heads-on fresh and cooked shrimp. In addition, the Distribution Center will make it possible to process thousands of pounds of shrimp not only for home delivery, but as a hub for pickup and delivery to local chefs.

$SHMP production locations are already up and running and generating revenue! pic.twitter.com/lNehTtWwTP

To Find out the inside Scoop on NaturalShrimp Subscribe to Microcapdaily.com Right Now by entering your Email in the box below 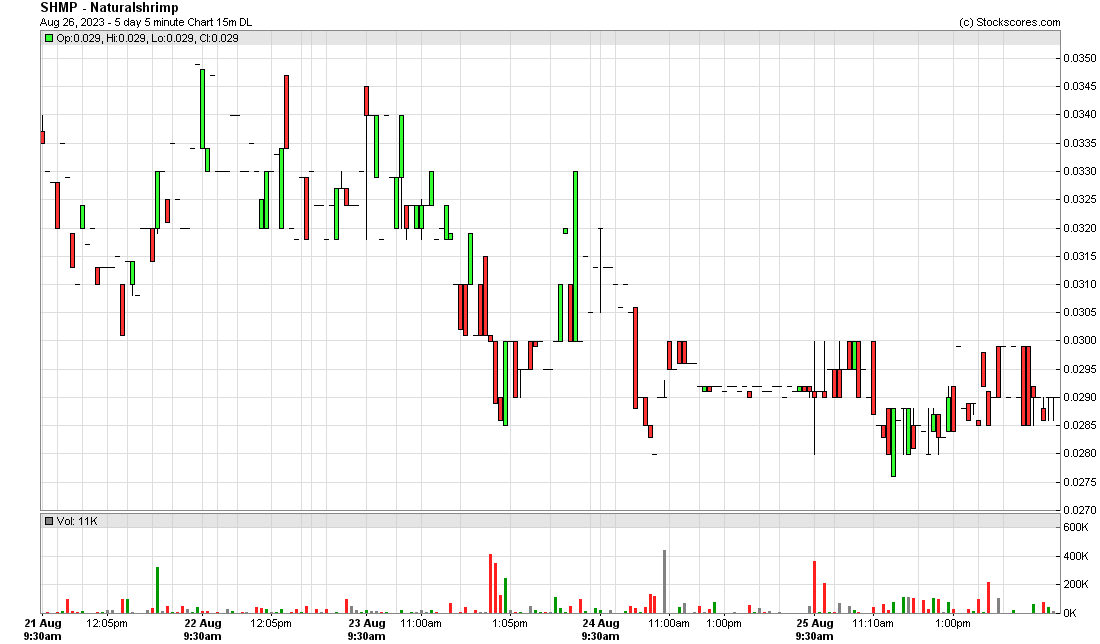 SHMP is up big after the Company signed a definitive agreement with Yotta Acquisition Corporation (NASDAQ: YOTA) for a proposed merger of the two companies. Under the Business Combination Agreement, NaturalShrimp will merge with a wholly owned subsidiary of Yotta. The companies intend for Yotta’s common stock to continue to be listed on the Nasdaq Capital Market. Assuming no redemptions by Yotta public stockholders, upon closing, the combined entity could have access to as much as $105 million in net cash from the Yotta trust account. Final proceeds will depend upon redemption rates of current Yotta stockholders at the consummation of the proposed Transaction.

Gerald Easterling, CEO of NaturalShrimp, said: “This business combination with Yotta has the potential to significantly accelerate our efforts for commercialization and the ramp up of production of our fresh, land-based gourmet-grade shrimp at the largest indoor farming facilities in the U.S. We also expect that the merger will provide us with additional capital to advance facility expansion efforts in strategic markets in the U.S., including Florida, Nevada, and the Northeast. Our goal is to rapidly build market share in the supply-constrained, premium segment of the market for large shrimp which sell at 20%-30% price premiums utilizing our propriety, proven and scalable technologies and production system. Combined with our capital efficient model, the transaction has the potential to put NaturalShrimp on the fast track to rollout across the 10 largest population centers in the U.S.”

Hui Chen, CEO of Yotta, added: “We believe NaturalShrimp’s patented technologies, attractive business model and unit economics provides a premium pricing opportunity for fresh, locally grown product that is of superior quality and sustainable. We further believe that NaturalShrimp is well-positioned to become a premier provider of shrimp in the U.S., and we are pleased that Yotta’s stockholders will have the opportunity to invest and help fill the gap in the large and growing shrimp market with land-based gourmet-grade shrimp without the use of antibiotics, probiotics or toxic chemicals.”

The proposed business combination is expected to close in the first quarter of 2023, subject to the satisfaction of customary closing conditions, including the effectiveness of the registration statement on Form S-4 that Yotta is required to file with the U.S. Securities and Exchange Commission (“SEC”), required Nasdaq approval, and the approval of the proposed Transaction and the Business Combination Agreement by a majority of the stockholders of NaturalShrimp and a majority of Yotta stockholders voting to approve thereon. Post-closing, the combined company Board of Directors will include seven directors designated by NaturalShrimp. Additional information may be found in the Current Reports on Form 8-K being filed by NaturalShrimp and Yotta with the U.S. Securities and Exchange Commission (“SEC”) in connection with the announcement of the execution of the Business Combination Agreement. NaturalShrimp intends to use the proceeds from the proposed Transaction to accelerate commercialization and production ramp up of its farm-to-table sushi grade shrimp and fresh seafood.

Currently trading at a $97 million market valuation SHMP OS is 751,385,454 with a float of 603,246,338 shares. SHMP is an exciting story developing in small caps; NaturalShrimp is the leader in fresh, sushi grade shrimp utilizing its patented, commercially-operational RAS (Recirculating Aquaculture System). Shrimp is the single most consumed seafood in the world, with nine billion pounds eaten annually worth over $4 billion. The stock is up big after the Company signed a definitive agreement with Yotta Acquisition Corporation (NASDAQ: YOTA) for a proposed merger of the two companies. Upon closing, the combined entity could have access to as much as $105 million in net cash from the Yotta trust account. This is very significant news for SHMP that should carry the stock over several days. SHMP hit $0.90 in early 2021 and has a massive gap to fill from current levels. Microcapdialy was reporting on SHMP when it was under $0.03. We will be updating on SHMP when more details emerge so make sure you are subscribed to Microcapdaily so you know what’s going on with SHMP.

Disclosure: we hold no position in SHMP either long or short and we have not been compensated for this article.