NextMart Inc. (OTCMKTS: NXMR) has been heating up and making a move northbound after a brief dip below the $0.02 mark earlier this month. Volume has picked up with NXMR currently under accumulation as the Company makes a number of big moves via its wholly-owned subsidiary, Emco Oilfield Services, LLC including multiple oil and fleet acquisitions, and extensive water rights acquisitions necessary to scale oil revenue moving forward. The Company is also starting to book some solid revenues reporting $1,594,837 in sales for the 3 months ended March 31, 2022. NXMR has a history of big moves rocketing up to $0.15 in February before the 305m OS cancellation was announced.

Emco’s specialized equipment includes its 32-34 ft steel end dump trailers, hauled by its late-model, well-maintained trucks to provide removal and disposal of drilling cuttings quickly and efficiently at 16-yards per load, throughout the Permian Basin. The Company also hauls wet or dry cuttings and solid material. Competitors largely use aluminum trailers, that require a poly-liner for which customers are charged extra. Emco’s end dumps are more durable, less expensive and requested first.

NextMart Inc. (OTCMKTS: NXMR) operating out of Carlsbad, New Mexico strives to meet and exceed the requirements of its customers 24/7/365. The Company’s primary services are hauling water and drilling cuttings for its customers during the drilling, completion and production of oil and gas wells throughout the Permian Basin.  Starting in March of 2018 with two end dumps, NXMR commitment to exceeding its customers’ expectations allowed the Company to grow to over 30 vac. trucks and end dumps by December 2018 with continued growth underway in 2019. NextMart’s  vac. trucks are equipped to load and unload fluid in half the time of its competition. Another innovation is the Company’s uniquely designed diesel-powered, centrifugal jet pumps that allow it to clean its customers’ steel pits and frac tanks 4 times faster than its competitors’ standard power washers. The Company operates via its wholly-owned subsidiary, Emco Oilfield Services, LLC. The Company recently brought on new CEO Oscar Maldonado, the former owner and officer of Two Brothers, LLC, a specialized oil field service company which was acquired as a wholly owned subsidiary by the Company on June 16, 2022, for 30,000,000 shares of Common Stock.

Emco Oilfield Services utilizes its fleet of uniquely equipped 130 Bbl. water trucks to deliver fresh (city and pond) water and 10# brine water to your drilling and frac locations and dispose of water-based drilling mud, OBM, frac flow-back water and production water. Most of Emco’s vac trucks are equipped with 4-inch vacuum pumps, 4-inch hoses and 4-inch ball valves on Emco vac trailers. Compared to most other water haulers, which use 3-inch vacuum pumps and 4-inch butterfly valves, Emco’s vac trailers load and unload in half the time, and the 4-inch full-port ball valves do not get clogged like the 4-inch butterfly valves.

To Find out the inside Scoop on NXMR Subscribe to Microcapdaily.com Right Now by entering your Email in the box below 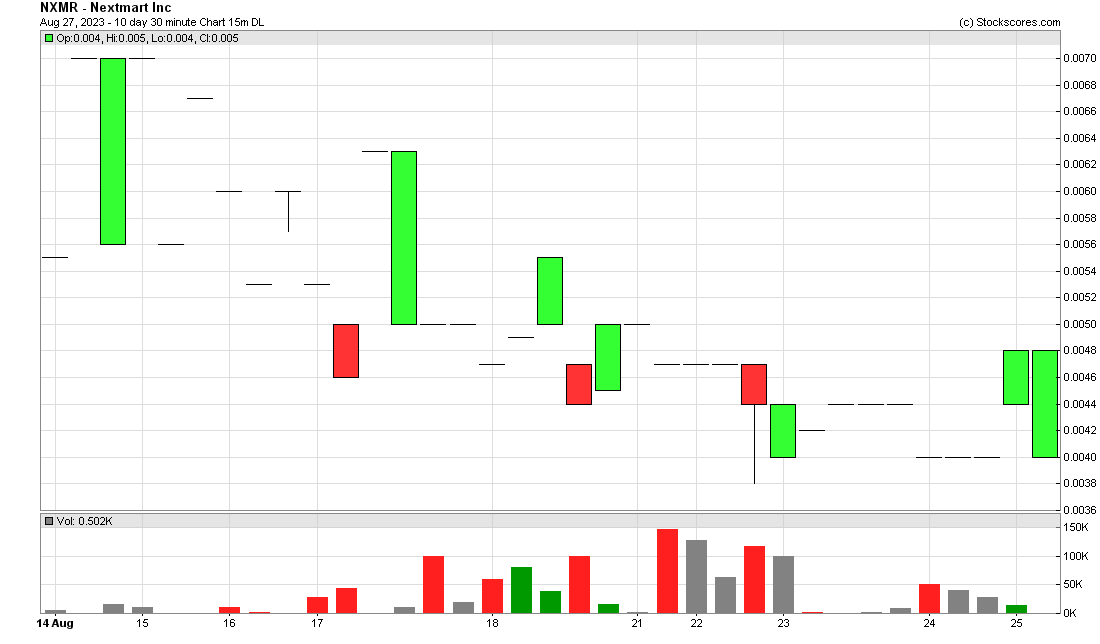 Emco recently launched an acquisition program of New Mexico water rights to expand its water capacity for own water stations in the Permian Basin; the largest oilfield in the world. EMCO is currently servicing over sixty (60) clients including major oil companies such as Exxon Mobile’s subsidiary, XTO, Chevron, Conoco Phillips, Occidental (OXY), and major independent public oil companies such as EOG, Devon, Cimarex, Noble Energy and many more. The acquisition of more New Mexico water rights is in direct response to the current fast-growing needs of its current clients, and new clients that are coming on board, due to the increased oil and gas activity in the Permian Basin.

On July 19 NXMR announced the development of two new water stations in the Carlsbad, New Mexico are. The Permian Basis is currently growing at an exponential rate with regards to the new production of oil and gas properties. The Company believes that there will be a corresponding increase in needs to oil field services including water stations which are required for the development and operation of oil and gas leases. As such, the new management of the Company is in the process of building out two new water stations in the Carlsbad area.

Mr. Maldonado (CEO of the Company), states…”Since starting as the new CEO of the Company, I have been trying to expand our top line revenue base. By opening two new water stations in Carlsbad, we will become a main source of the large amount of new and growing water requirements in the Permian Basin for oil and gas producers. We expect these operations to be up quickly and be in full operation during the third quarter. This is only one of our many planned future expansions to the revenue producing operations of the Company. We will be announcing several new additional revenue initiatives over the coming weeks and months.”

$NXMR appears to have bottomed out around $0.014 with accumulation rising sharply, a fight to reclaim the 50 MA, and plenty of catalysts yet to come. pic.twitter.com/aOzzEdP9Tg

Currently trading at a $10 million market valuation NXMR OS is 415,025,304 shares and they have a float of 41,381,915 shares. The Company has a fairly clean balance sheet with manageable debt and is looking to go fully reporting and uplist from here. NXMR currently under accumulation as the Company makes a number of big moves via its wholly-owned subsidiary, Emco Oilfield Services, LLC including multiple oil and fleet acquisitions, and extensive water rights acquisitions necessary to scale oil revenue moving forward. The Company is also starting to book some solid revenues reporting $1,594,837 in sales for the 3 months ended March 31, 2022. NXMR has a history of big moves rocketing up to $0.15 in February before the 305m OS cancellation was announced. Microcapdaily will be covering NXMR so make sure you subscribe to Microcapdaily right now so you don’t miss it.

Disclosure: we hold no position in NXMR either long or short and we have not been compensated for this article.