SmartMetric, Inc. (OTCMKTS: SMME) is making a move northbound since reversing off $0.0014 lows today after the Company announced its product testing with a major global credit card network has been able to be streamlined for what will be expected the last stage in gaining approval. This is big news for the Nevada based Company that makes a biometric fingerprint activated payments card.

SMME has come down a long way since trading as high as $0.046 in February of this year. Caused by significant dilution the stock currently trades at a $1.1 million market volution, is fully reporting OTCQB and has a decent looking balance sheet with $2.4 million in liabilities and is current pre revenue. The CEO and founder Chaya Hendrick has been getting active on twitter where he says the Company has “seriously positive new news to provide.” SmartMetric, Inc. (OTCMKTS: SMME) is a technology engineering company that has developed miniature electronic systems and software for use in the field of Biometric identification and validation for the payments, security access and identity validation sectors. SmartMetric, Inc. is registered in the State of Nevada. Based in the United States, it has research and development centers in Buenos Aires, Palo Alto and Tel-Aviv. SmartMetric has an issued patent covering technology that involves connection to networks using data cards (smart cards and EMV cards). In addition, SmartMetric holds the sole license to five issued patents covering features of its biometric fingerprint activated cards.

SmartMetric has commenced efforts towards creating a biometric health insurance card with memory for storing a person’s medical files, including medical images. This allows a person to securely take with them their private medical files inside the card when traveling away from home. For the first time, a person’s complete medical files can be stored in a credit card-sized card and the information is only able to be accessed by the card holder’s own fingerprint.

SmartMetric has developed its rechargeable battery powered fingerprint reader that is of a scale that fits “inside” a standard credit or debit card. The cardholder has stored inside the card his or her fingerprint. To activate the card the person swipes the fingerprint sensor, the sensor is connected to an internal microprocessor that manages the fingerprint sensor, fingerprint image capture and comparison matching with the pre-stored fingerprint of the cardholder held in the internal electronic memory of the card. The card has a surface mounted EMV chip as found on EMV banking chip cards that is activated or turned on only after a card holder’s fingerprint has been scanned and verified using the SmartMetric miniature “in-card” biometric scanner.

SmartMetric is the only USA based Biometric Credit Card company and has current manufacturing capacity to supply United States card issuing Banks with more than a million cards a month. The SmartMetric biometric in-the-card security uses a card holder’s fingerprint biometrics to identify the card user and turn on the card as it is being inserted into a card reader or ATM. A sensor is on the top of the card and is simply touched by the user as they reach across to insert their card in a reader. In less than a second the card holders’ fingerprint is scanned and matched with their pre-stored in the card fingerprint which in turn activates the card for a transaction.

To Find out the inside Scoop on SMME Subscribe to Microcapdaily.com Right Now by entering your Email in the box below 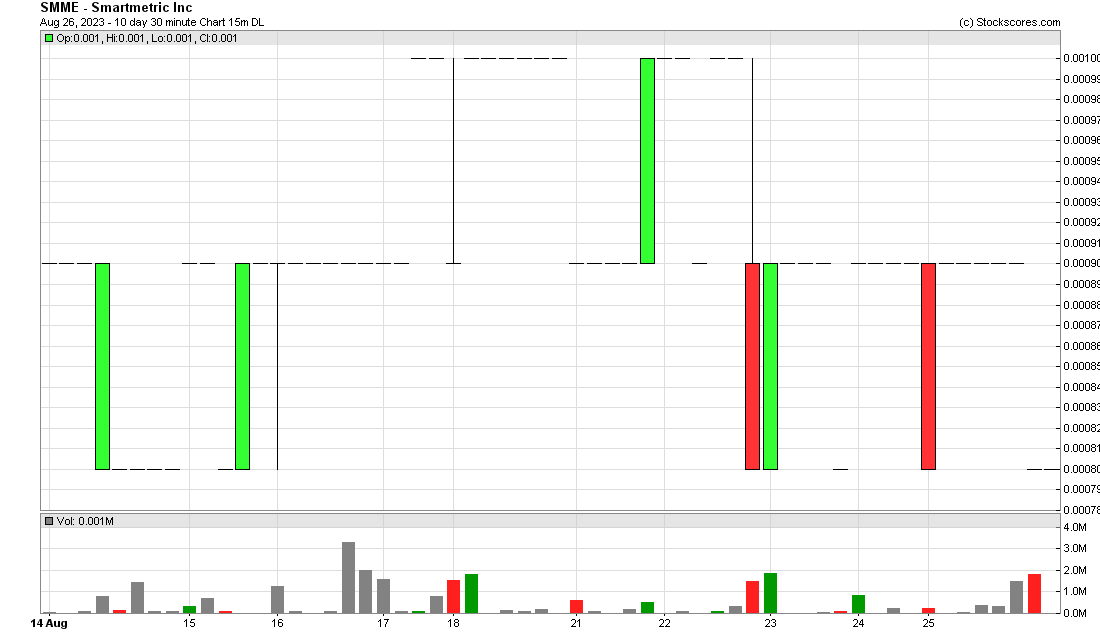 SmartMetric’s Biometric card addresses the multibillion existing chip-based credit and debit card market. Figures published by EMVCo reveal that by year end of 2020, 10.8 billion EMV® chip cards have been issued by financial institutions and were in global circulation – a massive increase of nearly 1 billion credit and debit EMV® cards compared to the previous twelve months.

The introduction of a unique and novel new card into the credit card world is a complex process requiring approvals for the product to be able to operate over a global payments network that interconnects with in store card readers and ATMs for credit and debit cards. SmartMetric is dealing with one of the largest of the top three global payments networks on moving the SmartMetric through their approval process. This has understandably been a long process as our card with its built inside-the-card biometric fingerprint scanning function is beyond the normal cards that are approved by the network for card manufacturers.

Now that SmartMetric has been cleared to submit its card in what is expected to be the final step in its network approvals process, the company is now able to complete its card production. Up until now there was a lot of back and forth on what EMV payments chip we could use on our card but thankfully that has now been resolved which gives us the ability to finish off our manufacturing in compliance with the credit card network. SmartMetric has all of its components now at its electronics assembler and will within a couple of weeks be moving forward with presentation of our card for final testing. This testing is for testing of the card body itself which is separate from its biometric electronic function. The last and quick process that will at the end of the day allow SmartMetric to provide its finally approved card to card issuing banks around the world.

SmartMetric CEO Chaya Hendrick Said: “We are pleased to say that we are now in the final process where our card only now needs to be tested as to the card body itself and now does not require any further assessment on its biometric functionality. As a company, we could not be more pleased with the supportive dealings we have had with this major credit card network and are excited to be moving forward to the last stage for our card to obtain approval for its use on their network.”

Currently trading at a $1.1 million market valuation SMME is on the move northbound since reversing off $0.0014 lows as the Company says its product testing with a major global credit card network has been able to be streamlined for what will be expected the last stage in gaining approval. This is big news for the Nevada based Company that makes a biometric fingerprint activated payments card and we know they are working with either VISA, Mastercard or American Express. The CEO and founder Chaya Hendrick has been getting active on twitter where he says the Company has “seriously positive new news to provide.” Priced right and under accumulation SMME was trading for $0.046 in February of this year and has a gap to fill from current levels. We will be updating SMME as events unfold so make sure you are subscribed to Microcapdaily.

Disclosure: we hold no position in SMME either long or short and we have not been compensated for this article.

Share
Facebook
Twitter
Pinterest
WhatsApp
Previous articleGlobalstar, Inc. (NYSE: GSAT) On the Move Since Apple Selected GSAT as Partner on Emergency Message Feature on the iPhone 14
Next articleLoop Media Inc (OTCMKTS: LPTV) On the Move as Co Behind Loop.tv Prepares to Up List to NYSE and Affect a 3 for 1 Reverse Stock Split