Sunhydrogen Inc (OTCMKTS: HYSR) is an exciting penny stock that is starting to get noticed again as it moves steadily northbound since reversing off $0.026 lows last week. HYSR is a stock with a long history of big moves starting in 2014 and continuing onward with the most recent run up in early 2021 to highs of $0.34 per share. So, when this one heats up, investors pay attention. HYSR also has an established shareholder base that will jump all over this one anytime in runs.

While the stock was dropping over the past year from $0.34 highs in early 2021 the Company has made progress. They entered into agreements with two technology development partners; InRedox in Longmont, Colorado and SCHMID Group in Freudenstadt, Germany and together they successfully completed production of 100 demonstration units of its Gen 1 technology, alongside the research team at the University of Iowa. More recently HYSR has expanded its industrial partnerships across the U.S., Germany, South Korea and Japan, and has renewed and initiated new collaborations with the University of Iowa and the University of Michigan. HYSR plans to build on this progress with multiple production-quality prototype demonstrations by the end of the year. The Company also brought on Dr. Arthur J. Nozik, a distinguished leader in photoelectrochemistry, semiconductor nanoscience and additional closely related fields, as Scientific Adviser to the company.

Sunhydrogen Inc (OTCMKTS: HYSR) is developing a breakthrough, low-cost technology to make renewable hydrogen using sunlight and any source of water, including seawater and wastewater. The only byproduct of hydrogen fuel is pure water, unlike hydrocarbon fuels such as oil, coal and natural gas that release carbon dioxide and other contaminants into the atmosphere when used. By optimizing the science of water electrolysis at the nano-level, our low-cost nanoparticles mimic photosynthesis to efficiently use sunlight to separate hydrogen from water, ultimately producing environmentally friendly renewable hydrogen. Using the Company’s low-cost method to produce renewable hydrogen, HYSR intends to enable a world of distributed hydrogen production for renewable electricity and hydrogen fuel cell vehicles.

The SunHydrogen solution offers an efficient and cost-effective way to produce truly green hydrogen using sunlight and any source of water. The Company’s core technology is a self-contained, nanoparticle-based hydrogen generator that mimics photosynthesis to split water molecules, resulting in hydrogen. By optimizing the science of water electrolysis at the nano-level, HYSR believes it has developed a low-cost method to potentially produce environmentally friendly renewable hydrogen. With a target cost of $2.50/kg., HYSR aspires for its technology to be cost-competitive with brown hydrogen and below the cost of clean hydrogen competitors.

Powered by solar energy, billions of microscopic nanoparticles split apart water at the molecular level, extracting hydrogen for use as a clean energy source and leaving behind only clean oxygen as a byproduct. This process is similar to what happens inside a plant cell during photosynthesis: Each Photoelectrochemically Active Heterostructures (or PAH) nanoparticle is a microscopic machine, composed of multiple layers enabling the solar electrolysis reaction to take place.

In 2021, the Company made strides toward the commercialization of its nanoparticle technology and entered into agreements with two technology development partners; InRedox in Longmont, Colorado and SCHMID Group in Freudenstadt, Germany. InRedox supported the design and production of essential materials for the Company’s nanoparticle technology while SCHMID worked to develop the process and equipment to manufacture and scale up the technology. The Company successfully completed production of 100 demonstration units of its Gen 1 technology. Both Schmid and InRedox work alongside the research team at the University of Iowa, a longtime technology development partner to SunHydrogen under sponsored research agreement. 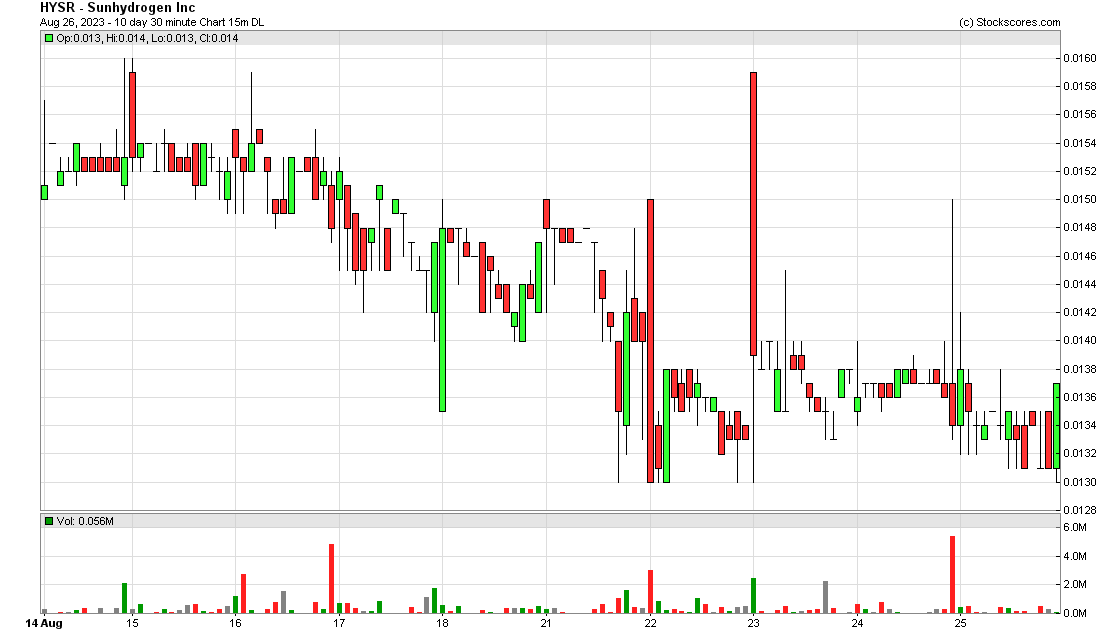 The global hydrogen market is large and growing rapidly. Over 110 countries have set goals to achieve net-zero emissions by 2050, and as governments look to clean energy sources to help them meet their targets, hydrogen is emerging as a promising solution. It is estimated that nearly 25% of global energy will come from clean hydrogen alone by 2050 a tenfold increase from today, which could bring in a projected $2.5 trillion in annual revenues (Source: Bank of America Securities, New Energy Behind Green Hydrogen).

HYSR has a growing intellectual property portfolio securing its first patent in 2017 covering the structural design of Photoelectrochemically Active Heterostructures (PAH) US Patent No. 9,593,053B1. In 2018 the Company was issued another patent covering the method for manufacturing PAH US Patent No. 9,593,053B2. Patents covering the Company’s semiconductor designs have been issued in Australia in April of 2018, China and Europe in March of 2019, and in the U.S. as United States Patent No. 10,100,415 in October of 2018. A patent application is currently pending in India.  On September 26, 2016, the Company filed jointly with the University of Iowa a provisional application for “Integrated Membrane Solar Fuel Production Assembly.” Also on September 26, 2017, HSYR filed a PCT Application that was later nationalized in the U.S. on March 26, 2019. The U.S. patent application for this important invention is pending and prosecution is ongoing.

According to a progress report from earlier this year HYSR has expanded its industrial partnerships across the U.S., Germany, South Korea and Japan, and has renewed and initiated new collaborations with the University of Iowa and the University of Michigan, respectively.=

SunHydrogen started 2022 with the addition of a new research and development laboratory in Coralville, Iowa, to fuel its goal of scaling up fabrication of its nanoparticle hydrogen generator units by the end of the 2022 fiscal year. The Company has hired several new senior engineers and chemists and are in the process of streamlining manufacturing operations, a task made more accessible by increasing our personnel. The Company plans to build on this progress in 2022 with multiple production-quality prototype demonstrations by the end of the year.

On May 10 HYSR announced the appointment of Dr. Arthur J. Nozik, a distinguished leader in photoelectrochemistry, semiconductor nanoscience and additional closely related fields, as Scientific Adviser to the company. Prior to NREL, Dr. Nozik held research positions at the Allied Chemical Corporation and the American Cyanamid Company, where efforts were focused on bringing emerging technologies and solutions to commercialization. Dr. Nozik has published over 270 peer-reviewed papers, proceedings, books and book chapters. He has been cited over 47,000 times, presented over 380 invited talks and has been awarded 11 U.S. patents and numerous honors for his work. Additionally, Dr. Nozik serves as a bi-annual consultant for Samsung, evaluating proposals from external scientists in the fields of solar energy, quantum-computing, electronics and more to determine if they are scientifically sound and suitable for integration with Samsung.

HYSR CEO Tim Young stated: “Dr. Nozik brings an immense wealth of knowledge to our team. It will be extremely valuable for him to not only evaluate our current methodology, but also bring new insights, strategies and solutions to our scientists. We are grateful for the opportunity to work with someone who has been at the cutting edge of this field since the start.”

$HYSR back to .15c easily pic.twitter.com/PPnmdbSENW

Currently trading at a $144 million market valuation HSYR has 4.2 billion out of 10 billion authorized shares outstanding. The Company is well funded moving forward with $42.6 million in the treasury and $7.4 million in marketable securities on $39.5 million in liabilities and the Company is pre revenue. HYSR is an exciting story developing in small caps addressing a booming hydrogen generation market size which was USD 142.33 billion in 2019 and is projected to reach USD 208.86 billion by 2027 and a trillion by 2050. At current levels the stock is at the bottom of its range and trading just over 52-week lows with significant catalysts coming in 2022. The stock has momentum, liquidity and legions of shareholders who will jump on this one anytime it moves. Microcapdaily covered HSYR in our article (Sunhydrogen Inc (OTCMKTS: HYSR) A Rising Bull) on July 29, 2020 when the stock was sub $0.01 just as it was taking off on its run to $0.34 highs in early 2021 and we will be updating on HSYR so make sure you are subscribed to Microcapdaily.