Social Life Network Inc (OTCMKTS: WDLF) is making a steady run northbound in recent trading moving up 12% on Friday on 43.5 million shares traded or about $122,000 in dollar volume. The stock is currently under heavy accumulation and breaking out northbound from its mid-August highs. From here the first real resistance is at a penny, a level WDLF reached in August of 2021 with the same share structure. On February 9, 2021 WDLF ran to $0.044 highs when OS was roughly half of what it is today meaning if WDLF made a similar run today to the same market valuation it would reach about $0.02 per share.

It’s easy to see why WDLF is currently under heavy accumulation because there are a lot of big things happening here. With the able guidance of CEO Ken S. Tapp, a Harvard Business School graduate and venture capitalist WDLF is changing its name to Decentral Life, and planning to uplist to a national exchange; NYSE or NASDAQ and just reported record revenues of $500,000 + in Q3 up well over 300% from the $140,000 in revenues in Q2 according to the latest update from the Company. Decentral Life has also collected on accounts receivable and currently has over $350,000 in cash in the treasury. WDLF is an SEC filer and will soon be OTCQB on OTCMarkets, the Company has very little debt of just $540k which is why there has been no dilution and OS has stayed the same over the past year and a half. On September 30, 2022, the Company filed a 1-A-W cancelling a 2 billion shares offering meaning the OS stays the same at 7.39 billion shares outstanding.

Social Life Network Inc (OTCMKTS: WDLF) dba Decentral Life is a technology business incubator that is focused on blockchain and AI technology with a goal of taking the Company’s participating in the incubator program and help them reach a liquidity event like an IPO, a security token offering or an acquisition. Decentral Life maintains a 15% stake in these Companies as well as an ongoing licensing agreement with each Company to receive 5% of their revenues.

The WDLF Token is an Ethereum ERC20 Utility Token that is mined by users of the social networking and e-marketplace platform that is powered by the Social Life technology business incubator program (TBI), a division of Decentral Life. Learn more about the Social Life Network TBI program by going to https://www.WDLF.ai/about-wdlf to support the token there is the WDLF crypto exchange which allows the tokens to be traded for other cryptocurrencies. The WDLF crypto wallet holds WDLF Tokens for cryptocurrency transactions. The initial Coin offering was in January 2022.

The Company’s president is Mr. Todd Markey, a wall street exec who has spent the last decade working in finance and the capital markets and is an expert for micro-cap to small cap companies in expanding their investor and public relations. Additionally, he has assisted companies in the pre-IPO and up-listing process, from the OTC markets onto Nasdaq and NYSE stock exchanges.

To Find out the inside Scoop on WDLF Subscribe to Microcapdaily.com Right Now by entering your Email in the box below 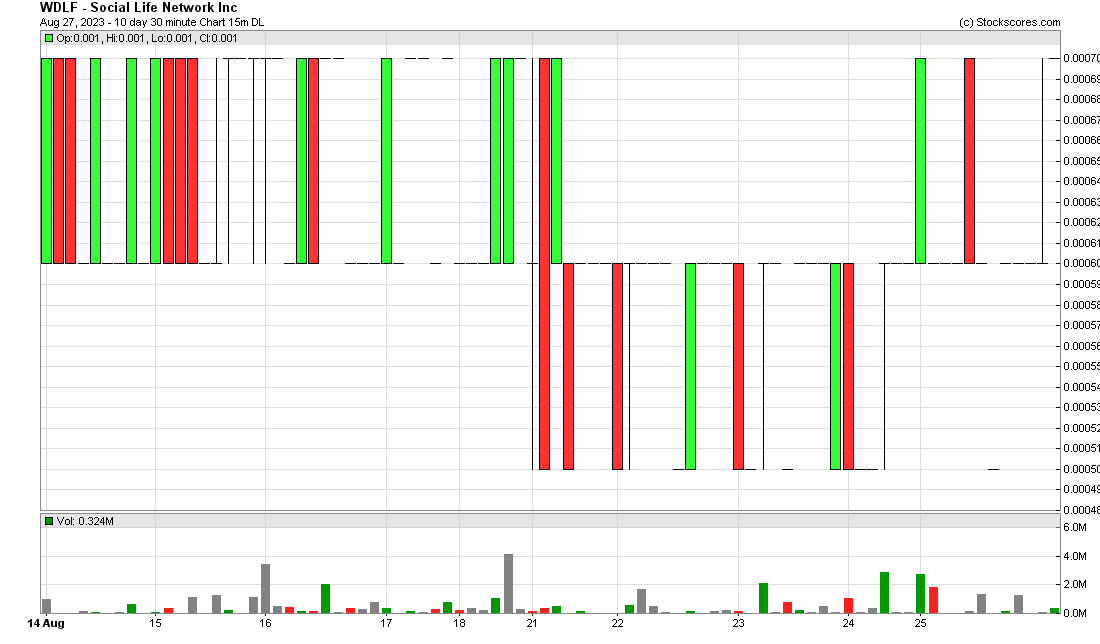 The Company’s sister Company’s netcube accelerator program has seen significant expansion and anticipates going from 4 to 6 Company’s currently to as many as 40 to 60 Company’s going through the program in 2023. Decentral Life is expecting to add a number of new Company’s to its TBI program in 2023 and will be ramping up the program in Q4 in preparation. Part of this growth means increasing office space and to this end, the Company is moving its headquarters to its office in Scottsdale, Arizona and will be expanding into new office spaces in Tempe, Arizona to help support the founders and CEOs of AI and blockchain related Company’s.

Decentral Life’s TBI Companies have been expanding over the year and the Company will continue to help support the new offices including a new office in Mineral Park, California across the street from Facebook and Instagram’s offices. There is also a new office in Greenwood Park, Colorado as well as a new office in Las Vegas, Nevada supporting in part Mj Link.

Decentral Life and its TBI’s will be presenting at the Next Deck Walk Investors Conferences on October 10 and 11 this week to approximately 100 retail and institutional investors. Investors in the Company should also be on the lookout in the coming days for another 8k announcing the Company’s next shareholder update. In Q4, Decentral Life will be going on a road show in preparation for an uplisting to NYSE or NASDAQ a task for which Ken S. Tapp and Todd Markey are especially qualified for. The Company will be presenting at multiple micro-cap events giving Decentral Life additional exposure to analysts, high net worth individuals and institutional investors.

https://t.co/lKQavB8obu If you missed the shareholder update on September 30th, here is the link. Thank you everyone for your continued support of our company and the support of one another as fellow shareholders. Have a safe extended weekend! $WDLF

Currently trading at a $20 million market valuation WDLF has 7,394,792,892 shares outstanding which has not changed over the past year and a half. The Company has over $350,000 in the treasury, very little debt and just reported record revenues of $500,000 + in Q3 up well over 300% from the $140,000 in revenues in Q2 and the Company’s highest revenues quarter ever. There are a lot of exciting things currently happening at WDLF; last week the Company finalized its months long effort to spin off 2 divisions of Mj Link; the weedlife division and the hemptalk division into separate Companies that shareholders will own a 15% stake in each Company. The remaining assets of Mj Link will then be acquired. HuntPost has been busy working on going public via a SPAC along with a roll out once public of multiple trade shows in the hunting, fishing, camping, outdoor space. Management is working hard behind the scenes in order to get the 10k out early this year in the 3rd or 4th week of October. Also, in Q4 the Company plans to continue to work with and support HuntPost, hemptalk as well as weedlife in their liquidity events and prepare for 2023’s growth with the Company’s TBI program. Decentral Life has a very indepth, corporate website reminiscent of a Company listed on a national exchange. They also do really neat commercials for their TBIs which can be seen here. Currently trading at $0.0028 and moving northbound steadily WDLF has a ton of room for growth from current levels and with a significantly stronger Company then they were in early 2021 the stock could dwarf that run under the right market conditions. We will be updating on WDLF when more details emerge so make sure you are subscribed to Microcapdaily so you know what’s going on with WDLF.

Disclosure: we hold no position in WDLF either long or short and we have not been compensated for this article. We have never spoken to any principals of WDLF or any major shareholders or 3rd parties. Much of the information here comes from the Company’s latest update located here.