88 Energy Limited (ASX:88E, AIM:88E, OTC:EEENF) trading volume has increased significantly in recent days as positive results from the Icewine East mapping could initiate a major reversal and move northbound on 88 Energy which is significantly oversold since the Merlin 2 plug. On May 9 the Company reported that the 3rd party evaluation of the Icewine East mapping is now complete showing that all Pantheon reservoir units extend onto the Project Icewine acreage. Pantheon wells – Alkaid-1, Talitha-A and Theta West-1 – have flowed 35⁰ to 40⁰ API oil from multiple Brookian reservoirs. Pantheon testing has confirmed reservoir deliverability of light, sweet oil. In-depth petrophysical re-evaluation of Icewine-1 and broader Icewine East acreage has been completed, with the results indicating comparable, or better, reservoir quality in some reservoir units relative to those of Pantheon’s tested intervals which flowed oil. Given the favorable petrophysical comparison between Icewine-1 and Alkaid-1, 88 Energy is optimistic that a production test in the Icewine East acreage could potentially yield a similar or better result than seen during the testing of Alkaid-1. The Company also notes Pantheon’s plans to drill a horizontal production well in mid-2022 in Alkaid, called Alkaid#2.

88 Energy has recently indicated they are in discussions in relation to a potential farm-out of the Project Icewine acreage. Due diligence activities and negotiations are advancing with a third party, including the related work program terms and structure. Execution and completion of the potential transaction is not guaranteed and remains subject to all documentation being agreed and due diligence completed. This has created a special situation for 88 Energy as the stock was way oversold on the Merlin 2 plug; the Company is in a strong financial position, with zero debt, $32 million in the treasury and total oil prospects for their wells targeting at least 1.638 billion barrels of oil in the Permian Basin. Management expects the Company’s financial position will be further strengthened with projected cash flows from recently acquired portfolio of Texas production assets, Project Longhorn. 88 Energy Ltd (OTCMKTS: EEENF) is an Alaska-focused oil exploration and appraisal company across ~440,000 net acres targeting the world class North Slope of Alaska estimated by the USGS in 2005 to hold more than 50 billion bbl of oil and natural-gas liquids and 227 trillion cubic feet of gas. 88 Energy owns a diversified portfolio of four highly prospective project areas: Project Icewine, Yukon Leases, Project Peregrine and the Umiat oil field. The company is the Operator across all of its portfolio of world class exploration and appraisal assets. 88 Energy’s drilling programs maintain adherence to the strict environmental regulations that exist in the State of Alaska. It’s drilling programs also provide significant job opportunities to local Alaskans. 88 Energy’s purpose is to build a successful exploration and production company that delivers material returns to its shareholders and contributes to stakeholders and development of the regions in which it operates in. 88 Energy has adopted the World Economic Forum Environment, Social, Governance (ESG) reporting framework to report against key sustainability metrics including governance, ethical behavior, carbon emissions, water consumption, diversity and inclusion.

One really exciting aspect of 88 Energy is its newly acquired Project Longhorn in the Permian Basin, Texas which is currently producing in excess of 400 BOE per day gross which represents a 30% increase since the acquisition was completed in February 2022. 88 Energy has a circa 73% average net working interest in these established production assets, which have independently certified net 2P reserves of 2.05 MMBOE.

Project Longhorn – is located in the attractive and proven Permian Basin, and consists of a total landholding exceeding 1,300 net acres. The assets comprise 9 leases with 32 producing wells and associated infrastructure. Lonestar I, LLC retains an approximate 24% net working interest in the assets and, through an affiliate will remain Operator. The remaining working interests are retained by pre-existing joint venture partners.

In March 2022, the Operator of the Longhorn production assets, Lonestar I, LLC, successfully completed the first of a series of capital-efficient work-overs planned after the completion of the Longhorn acquisition. This work-over was completed on time and on budget and has delivered an immediate increase to the total oil and gas production rates of the project.

Project Longhorn has exceptionally low operating costs (lifting costs), which provides high margins from production. First cash receipts from Project Longhorn were received by 88 Energy in March 2022, which comprised a payment of approximately A$0.6 million (net to 88 Energy and net of OPEX/CAPEX). Project Longhorn remains on track to complete the targeted seven capital development activities this year, which is expected to approximately double current production rates by the end of CY2022.

To Find out the inside Scoop on 88E Subscribe to Microcapdaily.com Right Now by entering your Email in the box below 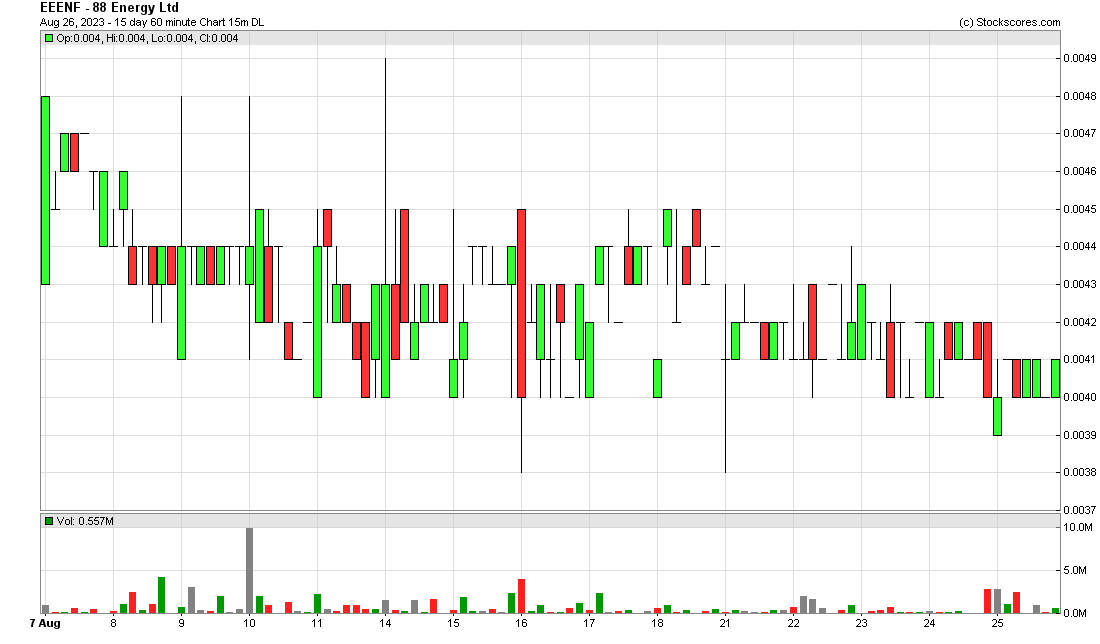 The acquisition of Project Longhorn in Q1 CY2022 represents 88 Energy’s first move into producing oil and gas assets and is in line with the Company’s strategy to build a successful exploration and production company. This initial step has been undertaken in a measured fashion via the purchase of a non-operated working interest with a single basin focus. Project Longhorn contains well understood geology with low technical risk and provides near-term upside via low-cost field development opportunities. As part of the acquisition, 88 Energy has agreed to a low-cost work program for CY2022 that includes seven work-overs. These initiatives are expected to approximately double production rates by the end of CY2022.

An in-depth petrophysical re-evaluation of Icewine-1 and the broader Icewine East area has also been completed by independent petrophysical consultants (Stimulation Petrophysics Consulting, LLC and Snowfall Energy LLC). The consultants focused on assessing Icewine-1 logs against intervals that flowed oil in Pantheon’s acreage to the north. Pleasingly, a comparison of the tested interval in Alkaid-1 against a similar interval in Icewine-1, called the SMD-B reservoir unit, indicated the favorable potential for a flow test of the same zone in the Icewine acreage.

Pantheon’s wells – Alkaid-1, Talitha-A and Theta West-1 flowed 35 to 40⁰ API oil from multiple Brookian reservoirs. Pantheon’s testing has confirmed reservoir deliverability of light, sweet oil (see Pantheon releases of 7 February and 21 February 2022), which 88 Energy believes is positive for the prospectivity of the adjacent Project Icewine acreage. This data is not yet publicly available and as a result only a qualitative comparison of these logs against Icewine-1 logs could be carried out at this time.

Given the favorable petrophysical comparison between Icewine-1 and Alkaid-1, the Company is optimistic that a production test in the Icewine East acreage could potentially yield a similar or better result than seen during the testing of Alkaid-1. The Company also notes Pantheon’s plans to drill a horizontal production well in mid-2022 in Alkaid, called Alkaid#2, to prove up the development concept (see Pantheon release of 24 January 2022 and Figure 2 available on the Company’s website).

Penny stock speculators are accumulating 88 Energy and looking forward to a major reversal and move northbound on 88 Energy which is significantly oversold since the Merlin 2 plug. 88 Energy is the operator of over 440,000 net acres in total across the Alaskan regions over four highly prospective project areas: Project Icewine, Yukon Leases and Project Peregrine and the Umiat oil fields. As oil continues to rise quickly recently surpassing $100 per barrel, it’s easy to see why EEENF is getting noticed by investors; the Company has been making some big moves behind the scenes including increasing their ownership in the Peregrine mine to 100%, Extinguishing all of their debt, and beefing up their management team with a new petroleum engineer and a petroleum Geologist in Philip Byrne and Robert Benkovic. The Company is very well funded moving forward with $32 million in the treasury and total oil prospects for their wells targeting at least 1.638 billion barrels of oil in the Permian Basin. Look out for news on Project Longhorn and Icewine East. We will be updating on 88E when more details emerge so make sure you are subscribed to Microcapdaily so you know what’s going on with 88E.

Disclosure: we hold no position in 88E either long or short and we have not been compensated for this article