Kronos Advanced Technologies Inc. (OTCMKTS: KNOS) is moving higher fast attracting legions of shareholders including some old timers that know what they are doing and emerging as a volume leader in small caps regularly topping millions in daily dollar volume. The stock has risen up from triple zeroes in February.

It’s easy to get excited about Kronos which recently said it is taking pre-orders for its next-generation smart air disinfection active technology purifiers, KRONOS® AIR 5G® model 5 (also marketed as AIRDOG X5 ™). The Company has the right people behind it; its CEO used to be a Astronautical Engineer with the NASA Jet Propulsion Laboratory and investor Kevin Harrington of Shark Tank fame recently joined the BOD.

The big story on Kronos is its next-generation smart air disinfection active technology purifiers, KRONOS® AIR 5G® model 5 (also marketed as AIRDOG X5 ™). This product line takes air purification to an entirely new level since it not only purifies by collecting and storing pollutants but in fact it kills the worst infectious viruses and bacteria with powerful output and speed, using intelligent laser air quality sensors and other innovative features. Utilizing the world’s most advanced air purification combined with disinfection technology- our products terminate and collect more than 99.9% of infectious airborne viruses, bacteria, and mold inside your home or business.

$KNOS has the right kind of penny stock speculators behind it 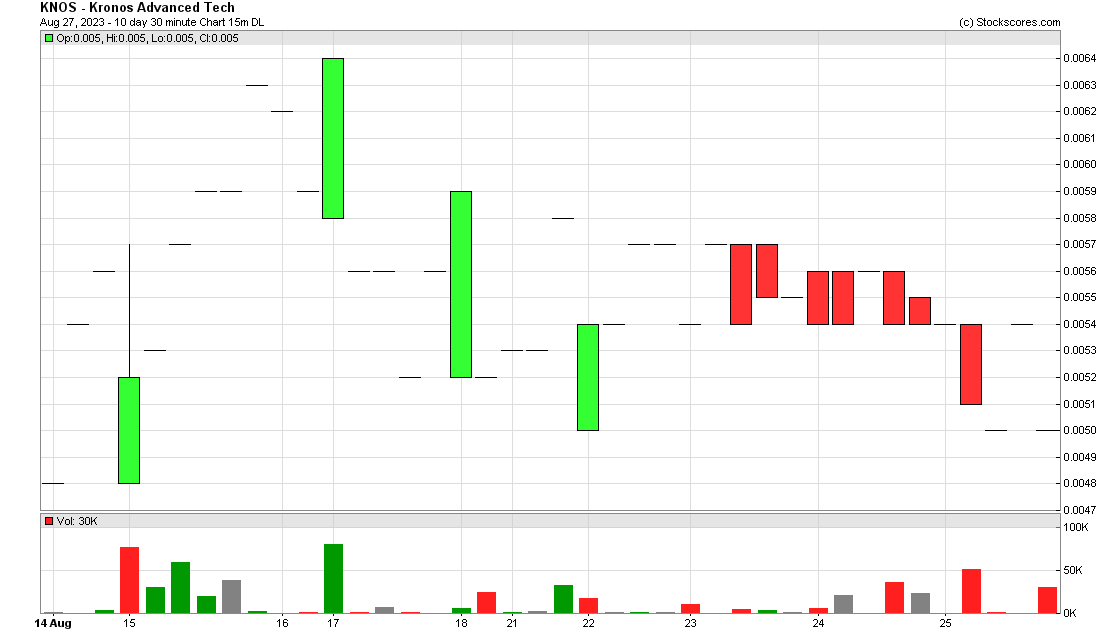 Earlier this year KNOS signed an LOI with a privately held company to acquire a manufacturing facility for its consumer electronics products operations. Kronos will begin preparations to shift the manufacturing of its patented air purifiers from its overseas manufacturers to the US.  The acquisition includes 85,000 square feet of manufacturing facilities located on a 9 acres campus in West Virginia at which the private company currently uses a small part of the facility to conduct product design and R&D. They currently have several near ready to manufacture products. The 85,000 square foot facility is currently owned by Joseph Florence KNOS CTO and his brother, which is one of the reasons that Kronos is fortunate to have access to this major opportunity.

According to KNOS its KRONOS® AIR 5G® is super energy-efficient using only 30 watts that is half that of a 60 WATT lightbulb. In comparison, some HEPA types can cost almost two dollars per day making those true energy hogs.  The smart controls and the auto-monitoring capabilities of the core technology adjusts its cleaning CADR strength when it senses greater pollution production. Included are long-lasting, reusable patented collector plates, so costly replacement filters are not required at all. AIR 5G® uses built-in laser sensors to detect changes in the indoor air quality (IAQ) and automatically adjusts fan speed levels until the air quality improves. Subsequently, it resumes to the standard-settings. This function, unique to AIR 5G® is a significant energy-saver, especially compared to World War 2 antiquated HEPA technology.

Pre-orders for the AIR 5G® air disinfection systems can be made online at www.1800SAFEAIR.com with $100 deposit that will be applied toward the AIR 5G® systems at $599.99 cost at the time of shipping.   Customers can also pre-order the newest KRONOS® AIR 5G® Model 8 units than can clean air throughout an entire house.

Currently trading at a $53 million market valuation KNOS is an exciting story developing in small caps;  Kronos recently said it is taking pre-orders for its next-generation smart air disinfection active technology purifiers, KRONOS® AIR 5G® model 5 (also marketed as AIRDOG X5 ™).a new technology that fully removes harmful allergens, bacteria, viruses (including the flu), and even gases from your breathing space. The Company has been making a number of big moves in recent months including investor Kevin Harrington of Shark Tank fame joining the bod, the LOI to acquire an 85,000 square feet of manufacturing facilities located on a 9 acres campus in West Virginia. KNOS lists $1 million in digital currencies on its books. Microcapdaly firt reported on KNOS on March 5 when it was well below $0.01. We will be updating on KNOS when more details emerge so make sure you are subscribed to Microcapdaily so you know what’s going on with KNOS.