Atlas Lithium Corporation (OTCQB: ATLX) is quickly emerging as one of the most actively traded stocks on the bulletin boards. The Brazilian miner believes that it holds the largest portfolio of lithium mineral exploration properties in Brazil, and that it is among the largest holders by size and breadth in exploration projects for battery metals globally. The Company’s Minas Gerais Lithium Project is located right next to Sigma Lithium currently trading for $35 per share on the Nasdaq.  The Company has big plans for growth and he has already taken steps to uplist Atlas Lithium to the Nasdaq stock exchange using EF Hutton as underwriter.

Atlas Lithium is led by MIT and Harvard Alum CEO Marc Fogassa who has an ambitious goal of making Atlas a billion-dollar lithium Company and he has been very successful in attracting a powerful high caliber management team and has been busy building up the Company’s bod recently bringing on wall street executive Stephen R. Petersen as a new board member. The Company also brought on CFO Gustavo Pereira de Aguiar, former controller of Jaguar Mining, Inc, a Canadian company with two producing gold mines in the state of Minas Gerais in Brazil and current market capitalization of approximately $270 million. Atlas Lithium Corporation (OTCQB: ATLX) Operating out of executive offices in Beverly Hills, California and Minas Gerais, Brazil, has one of the largest exploration projects for lithium and other battery minerals in Brazil. The Company is focused on advancing, expanding, and developing its portfolio of mineral rights for battery metals which currently includes 72,344 acres (293 km2) for lithium in 59 mineral rights, 54,950 acres for nickel (222 km2) in 15 mineral rights, 30,054 acres (122 km2) for rare earths in seven mineral rights, 22,050 acres (89 km2) for titanium in seven mineral rights, and 13,766 acres (56 km2) for graphite in three mineral rights. Atlas Lithium believes that it holds the largest portfolio of lithium mineral exploration properties in Brazil, and that it is among the largest holders by size and breadth in exploration projects for battery metals globally. The company also owns approximately 44% of Apollo Resources Corp. (private company; iron) and 24% of Jupiter Gold Corp. (OTCQB: JUPGF). Several weeks ago, the Company engaged international investor relations specialists MZ Group to lead a comprehensive strategic investor relations and financial communications program across all key markets.

The Company is led by CEO Marc Fogassa, a high-level executive with extensive experience in venture capital and public company chief executive management. He has served on boards of directors of multiple private companies in various industries, and is a regular speaker internationally. Mr. Fogassa graduated with two Bachelor of Science degrees from MIT and from Harvard Medical School with a Dr. of Medicine. Mr. Fogassa owns 2,877,789,671 shares of ATLX.

Atlas Lithium’s 100% owned Minas Gerais Lithium Project currently encompasses 52 mineral rights spread over approximately 56,078 acres (227 km2) located in the northern part of the State of Minas Gerais, Brazil, in the municipalities of Araçuai, Itinga, Coronel Murta, Rubelita, Taiobeiras, and Virgem da Lapa. Several of the Company’s mineral rights are located adjacent to or near mineral rights that belong to Sigma Lithium currently trading for $35 per share on the Nasdaq which has demonstrated through extensive drilling the presence of lithium deposits totaling over 80 million tons, according to its publicly available filings. The Company’s exploratory work to date in some mineral rights in its Minas Gerais Lithium Project has determined the existence of hard rock pegmatites with lithium mineralization. Given the proximity to areas of economically significant lithium deposits, Company technical experts believe that one or more areas of its Minas Gerais Lithium Project may also contain similar lithium deposits.

Currently Atlas Lithium is drilling the Neves Area at its flagship Minas Gerais Lithium Project. SLR International Corporation (SLR), a premier independent mineral resource evaluation firm, recently authored a preliminary technical report on the Neves Area showcasing its favorable geology for lithium and its potential. Additionally, an initial metallurgical study at SGS-Geosol, a first-tier independent analytical laboratory, has shown ease in recovery of lithium concentrate from samples obtained at the Neves Area. The Company’s geological and metallurgical teams are working closely with counterpart experts from SLR to produce the Company’s maiden resource report, followed by a preliminary feasibility study, as Atlas Lithium works toward its revenue-generating goal of entering lithium concentrate production.

spent some time on $ATLX last night and came away impressed.

the snips below are what interest me, taken from the 11/7 presentation on their homepage, & SEC filing pic.twitter.com/LDrCJD1q3J

To Find out the inside Scoop on ATLX Subscribe to Microcapdaily.com Right Now by entering your Email in the box below 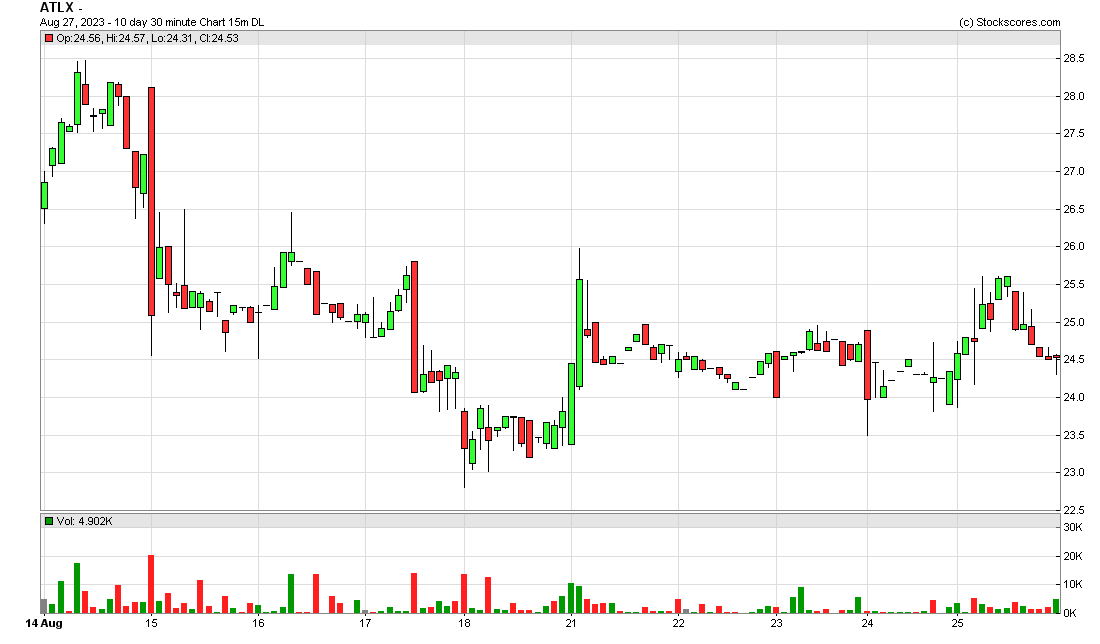 On November 2 Atlas Lithium provided a corporate update in conjunction with the filing of its Quarterly Report on Form 10-Q for the third quarter ended September 30, 2022: The Company began to implement its current business strategy of focusing on the exploration of strategic minerals in 2018. From 2018 through 2022, the Company significantly expanded its portfolio of mineral rights for battery metals which currently includes 72,344 acres (293 km2) for lithium in 59 mineral rights, 54,950 acres for nickel (222 km2) in 15 mineral rights, 30,054 acres (122 km2) for rare earths in seven mineral rights, 22,050 acres (89 km2) for titanium in seven mineral rights, and 13,766 acres (56 km2) for graphite in three mineral rights. Atlas Lithium believes that it holds the largest portfolio of lithium mineral exploration properties in Brazil, and that it is among the largest holders by size and breadth in exploration projects for battery metals globally.

In the third quarter of 2022, the Company filed its first geological report that highlighted the potential of its 100%-owned Minas Gerais Lithium Project and was prepared by independent expert firm SLR International Corporation in compliance with Regulation S-K 1300 (“SLR Report”) applicable to U.S. reporting companies, bringing significant credibility to the Company’s lithium program. Importantly, the SLR Report indicated that, commercial-grade lithium concentrate was able to be produced at a well-respected third-party testing facility using mineralized samples from the Company’s project. Atlas Lithium’s purchase of additional lithium mineral rights during 2022 is reflected by the $4.8 million of intangible assets as of September 30, 2022, which is an increase of 271% from $1.3 million as of 2021 year-end. In addition, the Company’s net stockholder’s equity stood at $2.6 million as of September 30, 2022, which represents an increase of 468% from $0.5 million as of December 31, 2021. Finally, the Company continues to actively work towards the uplisting of its common stock to the Nasdaq Capital Market.

CEO Marc Fogassa stated: “We are executing upon our flagship Minas Gerais Lithium Project with the continuation of our drilling program being our primary focus in the second half of 2022″Our Neves Area, one of the 52 mineral rights that comprise this exploration project, has yielded very promising results for lithium mineralization with potential for future production of commercial-grade lithium concentrate. We also made several recent additions to our executive team that will be critical to our continued delineation of our mineral resources and development of our projects. As part of our strategy to capitalize on the accelerated worldwide demand for battery minerals used in electric vehicles, we have begun discussions with large, global companies seeking to secure our lithium supply. Given Atlas Lithium owns the largest footprint of lithium areas in Brazil, we are uniquely positioned to establish Atlas Lithium as a leader in one of the world’s premier regions for lithium.”

Currently trading at a $39 million market valuation ATLX has 3,385,151,300 shares outstanding of which 1,222,982,873 are restricted, leaving 2,187,513,979 free trading BMIX shares. The Company has $1.8 million in assets and under $1 million in debt. *Not including equity stakes in Apollo Resources, and Jupiter Gold Corporation (OTCQB: JUPGF) BMIX traded as high as $0.10 in early 2021 and recently reversed off $0.0039 lows after the seller that decimated the share price in recent months closed out their position. BMIX Minas Gerais Lithium Project intersects the property of Sigma Lithium Corp currently trading for $35 on the Nasdaq. Sigma has  demonstrated through extensive drilling the presence of lithium deposits totaling over 20 million tons, according to its publicly available filings. Besides lithium, Brazil Minerals’ portfolio of exploration properties for other battery metals includes 59,700 acres (234 km2) for nickel, 30,009 acres (121 km2) for rare earths, 22,050 acres (89 km2) for titanium, and 14,507 acres (59 km2) for graphite. The Company believes that it has one of the largest exploration footprints for battery metals among publicly listed companies. We will be updating on ATLX when more details emerge so make sure you are subscribed to Microcapdaily.

Disclosure: we hold no position in ATLX either long or short and we have not been compensated for this article.