Bitcoin Services, Inc. (OTCMKTS:BTSC) is making an explosive move up the charts on huge volume as bitcoin recently surpassed $10k and is now on its way to $11k. It has been a while since btc has been hot and investors are excited. BTSC has runner in its blood and skyrocketed from tiple zeroes to highs near $0.70 on the last BTC run. When BTSC heats up; penny stock speculators  pay attention.

BTSC may not put any press releases but if one thought this ticker is dead one would be mistaken; the Comapny is currently mining crypto and has $500,000 cash in the treasury. They have also done $70k in revenue in 2020 so far and maintain a balance of 107.90 Bitcoins, and 542.54 Ethereum as of March 31, 2020. With its crypto stash valued at $1.3 million BTSC is one to watch as Crypto heats up.

Bitcoin Services, Inc. (OTCMKTS:BTSC) is focused on bitcoin mining as well as blockchain software development.The market for these services and products is worldwide, and sold and marketed on the Internet. The company has created a new subsidiary Crypto Capital Corp that will develop a new Crypto currency wallet that lets users safely store multiple digital currencies in one wallet.

BTSC is focused on bitcoin mining which is legal and is accomplished by running SHA256 double round hash verification processes in order to validate Bitcoin transactions and provide the requisite security for the public ledger of the Bitcoin network. The speed at which you mine Bitcoins is measured in hashes per second. The Bitcoin network compensates Bitcoin miners for their effort by releasing bitcoin to those who contribute the needed computational power. This comes in the form of both newly issued bitcoins and from the transaction fees included in the transactions validated when mining bitcoins.

To Find out the inside Scoop on BTSC Subscribe to Microcapdaily.com Right Now by entering your Email in the box below 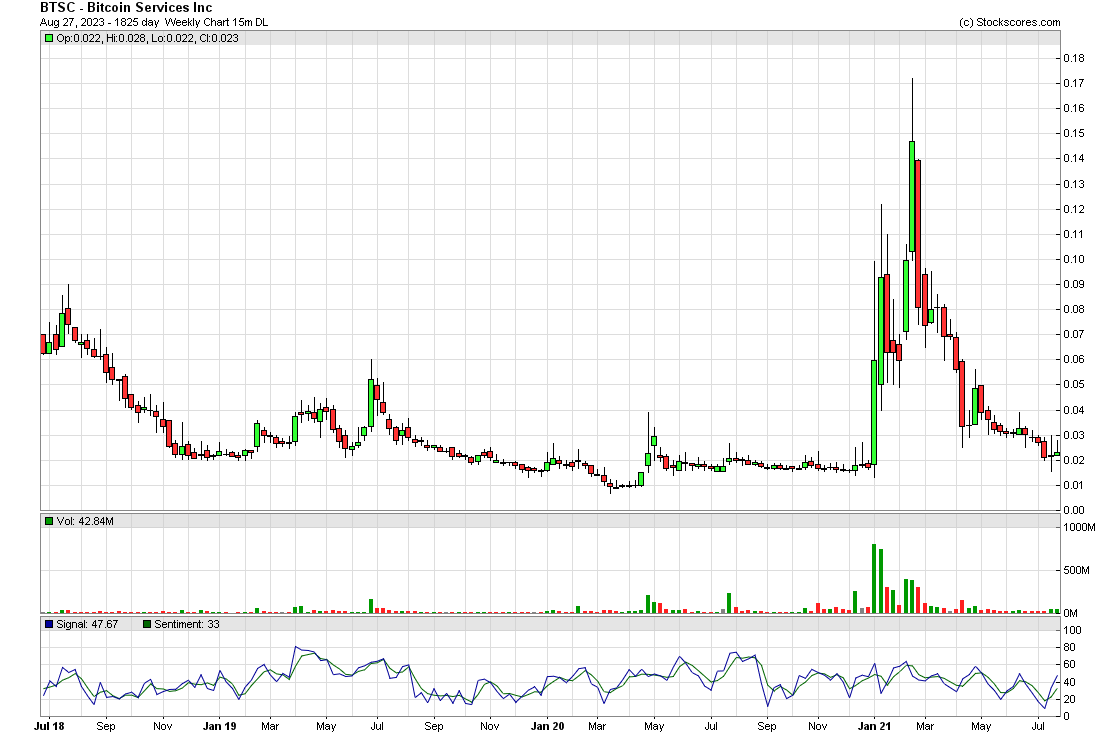 Microcapdaily first reported on BTSC n September 2017 as the sock exploded from sub pennies to over $0.60 per share reporting at the time: “BITCOIN SERVICES I COM USD0.001(OTCMKTS:BTSC) has seen a spectacular rise in 2017 from triple zero lows last year to recent highs over $0.20 per share as the price of Bitcoin explodes! Over this time period trading volume in BTSC has skyrocketed propelling this one to the top of the OTC volume leaders.”

The Company has not put out any press in a while; the last time we covered them they were launching a new corporate websiteo and had just started mining DASH. They were also in the process of creating a new subsidiary in order to build a new Crypto currency wallet.

Currently trading at a $12 million market valuation BTSC is one exciting story developing in small caps;  the Comapny is currently mining crypto and has $500,000 cash in the treasury. They have also done $70k in revenue in 2020 so far and maintain a balance of 107.90 Bitcoins, and 542.54 Ethereum as of March 31, 2020 making its  crypto stash worth at least $1.3 million and climbing. BTSC has runner in its blood and skyrocketed from tiple zeroes to highs near $0.70 on the last BTC run. When BTSC heats up; penny stock speculators  pay attention. We will be updating on BTSC on a daily basis so make sure you are subscribed to microcapdaily.com so you know what is going on with BTSC.

Disclosure: we hold no position in BTSC either long or short and we have not been compensated for this article.