Nextech Ar Solutions Corp (OTCMKTS: NEXCF) has been racing up the charts in recent weeks transforming into a volume leader in small caps regularly trading $5 million USD in daily trading volume as it continues to move higher. According to CEO Evan Gappelberg since the coronavirus outbreak Nextech business has exploded.

Nextech is at the right place at the right time with the right businesss model as AR sees rapid growth and it’s easy to see why investors are so excited; CEO Evan Gappelberg recently increased his position in NEXCF to over 1 million shares and the Company signed a contract to supply its InfernoAR video conferencing and virtual events platform to the Dallas Independent School District (Dallas ISD) among many other recent highlights.

Nextech Ar Solutions Corp (OTCQB: NEXCF) (CSE: NTAR) (FSE: N29) is one of the leaders in the rapidly growing AR industry, estimated to hit $120 billion by 2022, according to Statista. NexTech, the first publicly traded “pure-play” AR company, began trading on the CSE on October 31st, 2018. NexTech has a two-pronged strategy for rapid growth including growth through acquisition of eCommerce businesses and growth of its omni-channel AR SaaS platform called ARitize™.

To Find out the inside Scoop on NEXCF Subscribe to Microcapdaily.com Right Now by entering your Email in the box below 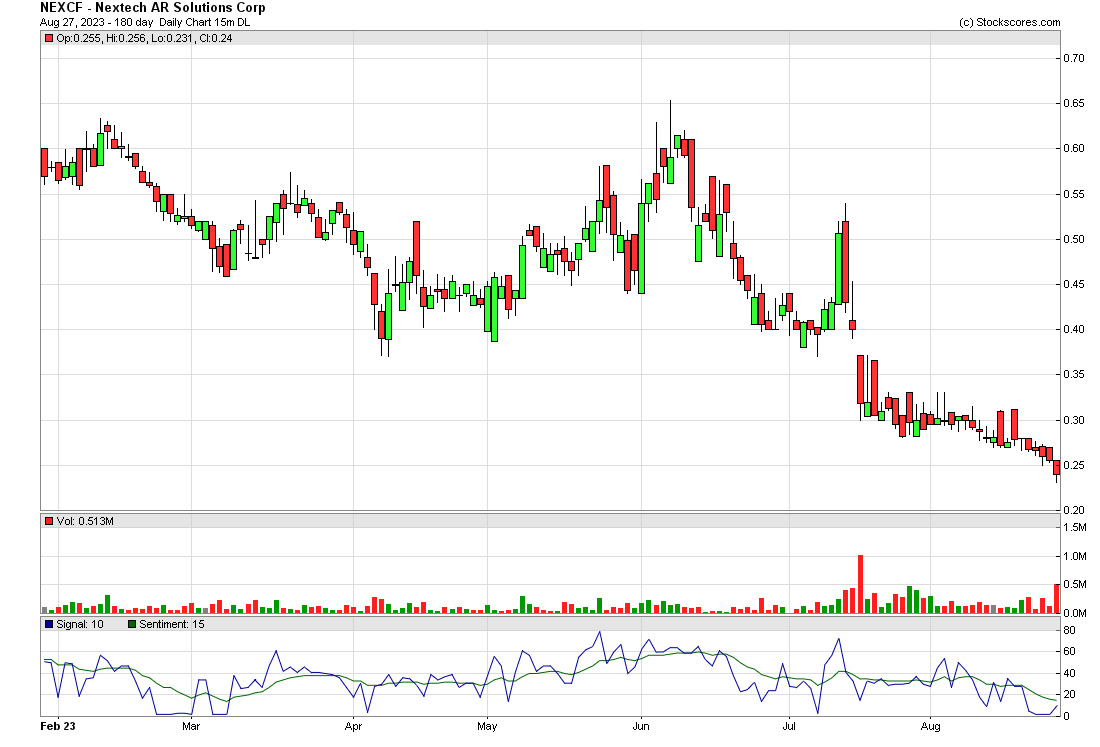 Evan Gappelberg, CEO of NexTech AR Solutions comments “I’m excited to report record numbers for the month of May and I am particularly excited that we were able to achieve $1,300,000 in sales in just one month, hitting a new company high. During the month of May, we saw an acceleration in sales growth across all our offerings. The demand and need for our virtual events platform, our augmented reality solutions and e-commerce has never been stronger and we see that trend continuing. He continues, “With 100% of live events cancelled our newly acquired virtual events platform InfernoAR has really taken off in a big way and looks to grow dramatically in Q2, 2020 and beyond. In order to meet the demand we are working overtime, have hired two new sales reps and are planning to hire more. Demand is coming from across a wide spectrum including; Universities, Sports teams, Religious institutions and multinational companies”.

On July 2 NexTech announced bit has hired Arnaud Amet as Director of  Sales for Europe. Mr. Amet situated in Paris, France comes from regional and global sales and marketing roles in Microsoft (MSFT) where he worked for over a decade ending in 2015. He also has significant experience with his own startup in sales and marketing of AR/VR to large brands partnering with Facebook (FB), Huawei and Microsoft. With the hiring of Mr. Amet, NexTech is expanding not just its geographical footprint but also its growing talent base, which is critical to the company’s rapid growth plans.

MicroCapDaily reported on NexTech when the stock was trading around $1 stating at the time: “Nextech Ar Solutions Corp (OTCMKTS: NEXCF) has been on the rise in recent days since a brief dip below the $1 mark last week. Nextech was recently trading as high as $2.50 per share but has seen its stock price collapse due to a massive short attack by Hindenburg Research.  Currently trading at a $291 million market valuation NexTech is an exciting story in small caps; The Company is well financed having completed a recent financing and Nextech is at the right place at the right time with the right business model as AR sees rapid growth. CEO Evan Gappelberg recently increased his position in NEXCF to over 1 million shares and the Company signed a contract to supply its InfernoAR video conferencing and virtual events platform to the Dallas Independent School District (Dallas ISD) among many other recent highlights. We will be updating on NexTech when more details emerge so make sure you are subscribed to Microcapdaily so you know what’s going on with NexTech.

Disclosure: we hold no position in NexTech either long or short and we have not been compensated for this article