RenovaCare, Inc. (OTCPINK: RCAR) is heating up and moving steadily higher in recent trading as investors continue to accumulate. RCAR has runner in its blood with a long history of explosive moves running to $12.82 highs in early 2018. When a stock like RCAR heats up, penny stock speculators pay attention.

We have reported on Renovacare in the past and in November 2018 we covered the equity financing for $15.5 million from Kalen Capital Corporation that RenovaCare received from  the family office of Mr. Harmel S. Rayat, majority shareholder and Chairman of RenovaCare increasing his family office’s total equity investment in RenovaCare since 2013 to over $20 million.

RenovaCare, Inc. (OTCPINK: RCAR) operating out of its executive offices in Roseland, New Jersey with a new R&D Innovation Center in Berlin, German, is developing breakthrough technologies to address America’s $45 billion wound and burn treatment market. Its flagship CellMist™ System makes use of a patient’s own stem cells, which are sprayed onto wounds using its novel SkinGun™ device. For patients suffering severe burns and other wounds, the prospect of a quick-healing, gentle spray containing their own stem cells is a promising alternative to conventional skin graft surgery, which can be painful, prone to complications, and slow-to-heal. Based on preliminary case studies, CellMist™ System patients can be treated within 90 minutes of arriving in an emergency room; a patient’s stem cells are isolated, processed, and sprayed on to wound sites for rapid healing. Preliminary investigational use in Europe and the United States indicate the potential efficacy and safety of RenovaCare’s technologies. Clinical observations point to the potential for regeneration of new skin in as little as four days, rather than the many weeks of painful and risky recovery required by traditional skin graft techniques. The Company believes its RenovaCare’s CellMist™ System and SkinGun™ spray device are the world’s most advanced technologies of their kind. Along with US patent applications that were granted in November 2016 (Patent No. US 9,505,000), and April 2017 (Patent No. 9,610,430) and, most recently, in August 2019 (Patent No. 10,376,658). The Company has filed additional patent applications related to the CellMist™ System and other technologies.

RenovaCare is an exciting story that has been reported on by mainstream press including Mashable, The HuffingtonPost, Newsweek, Forbes, Bloomberg and CNN who stated in their article ” (CNN)An experimental technology offers new hope to patients who have suffered a severe burn. The product, from New York biotech firm RenovaCare, is rooted in cutting-edge stem cell research. The CellMist System harvests a patient’s stem cells from a small area of unwounded skin (usually one square inch) and suspends them in a water-based solution. The SkinGun sprays the solution onto the wound, where new skin begins to grow at the cellular level.”

To Find out the inside Scoop on RCAR  Subscribe to Microcapdaily.com Right Now by entering your Email in the box below 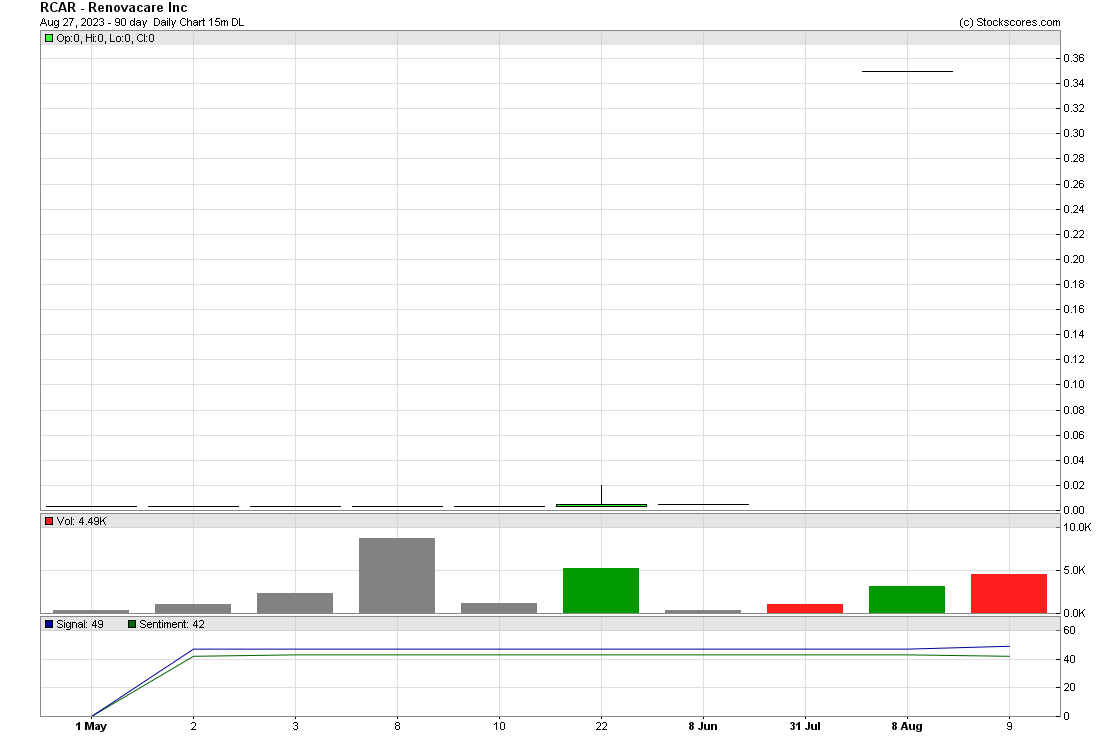 RenovaCare is focused on leverage the potential of its CellMistTM System, as cutting edge treatments in skin therapy. The Companies plans include initiating a series of clinical trials to determine the CellMistTM System’s safety and efficacy for treating wounds and burns. Formalizing collaborations with universities, scientific, and/or commercial partners. Creating a network of clinical and research partners. Achieving FDA and/or other regulatory clearance; and expanding the range of possible clinical applications.

On July 1, RCAR announced the official launch of its new RenovaCare R&D Innovation Center in Berlin, Germany, where the Company’s patented technologies for isolating and spraying self-donated stem cells to regenerate tissues and organs have been under development alongside new product initiatives. Important programs at the Center include preclinical support to RenovaCare regulatory submissions for its flagship SkinGun™, which delivers a proprietary gentle CellMist™ spray of a patient’s own skin cells on to burns and wounds.

RenovaCare CEO Mr. Alan L. Rubino stated: “Our investment in the RenovaCare R&D Innovation Center helps build shareholder value by strengthening our pre-clinical work for regulatory submissions, and positioning us to invent, patent, and clinically translate next-generation biomedical technologies and devices for meeting unmet medical needs, and commercialization.  I’m proud of our new Innovation Center, which is staffed by the highly talented team who pioneered our SkinGun™ technology from its invention to prototype, to spraying the first human patients with their own cells to heal burns. The group’s team cohesion spans over a decade, bringing valuable technical continuity to the development of our biomedical technologies, devices, and products,” explained Mr. Rubino.

RenovaCare Awarded New Patent Allowing for the Spray of Stem Cells for Regeneration of Organs and Tissues $RCARhttps://t.co/Ozze6wwanx

Currently moving steadilyhigher RCAR is an exciting story developing in small caps; the Company is fully funded thanks to $20 million total quity investment from the family office of Mr. Harmel S. Rayat, majority shareholder and Chairman of RenovaCare. Its flagship CellMist™ System makes use of a patient’s own stem cells, which are sprayed onto wounds using its novel SkinGun™ device. This exciting breakthrough technology address ‘s America’s $45 billion wound and burn treatment market and has been reported on by mainstream press including Mashable, The HuffingtonPost, Newsweek, Forbes, Bloomberg and CNN. RCAR has runner in its blood with a long history of explosive moves running to $12.82 highs in early 2018. When a stock like RCAR heats up, investors pay attention. We will be updating on RCAR when more details emerge so make sure you are subscribed to Microcapdaily so you know what’s going on with RCAR.

Disclosure: we hold no position in RCAR either long or short and we have not been compensated for this article.