Darkpulse (OTC: DPLS) is probably the biggest sleeper on the OTC with a truly game changing technology that could revolutionize any number of industries with multi-billion dollar implications. An SEC filer that recently submitted its application to the OTCMarkets Venture Market as part of its plan to trade on larger markets such as NASDAQ. Like many of the biggest winners we have covered on this website, DPLS is one stock retail investors and many of the smartest and biggest players in small caps are not selling, with every 10th of a penny DPLS drops they accumulate more, and this is indicative of many of the biggest historic runners we have covered on this website. The implications of integrating Darkpulse world-class and market leading BOTDA dark-pulse sensor technology into the Honcut Bridge in Loma Rica California, or into high rise projects throughout Egypt, a leading technology focused country that opens the gates to Africa & the Middle East, Darkpulse fiber-optic ‘smart wall’ cables could be used to monitor and secure remote and unprotected US borders in states like Arizona, New Mexico and Texas. DarkPulse’s market leading technology can build up an x-ray picture of the entire area. The Company made a smart move into the Drone business and, while their fiber-optic cables can detect intruders approaching on foot or in underground tunnels, a signal can automatically launch a drone with facial recognition to catch coyotes and drug-runners. Darkpulse has employed the Bachner Group recently pitching its sophisticated fiber-optic ‘smart wall’ cables to Department of Homeland Security officials. DPLS is a leader in distributed fiber sensor solutions whose proprietary patented system outperforms all other distributed fiber sensors currently on the market. By contrast to existing technologies, the DarkPulse Technology is a distributed-fiber sensing system, based on dark-pulse Brillouin scattering, which reports in real-time on conditions such as temperature, stress, strain corrosion and structural health monitoring of Critical Infrastructure/Key Resources including Bridges, Buildings, Roadways pipelines and mining installations. The Company boasts a growing list of world-class capabilities and is positioning itself as the leader in infrastructure sensing and monitoring in all domains, air, land, and sea which represents an enormous market worth billions putting Darkpulse in line for serious government contracts. DarkPulse, Inc. uses advanced laser-based monitoring systems to provide rapid and accurate monitoring of temperatures, strains, and stresses. The Company’s technology excels when applied to live, dynamic critical infrastructure and structural monitoring, including pipeline monitoring, perimeter and structural surveillance, aircraft structural components and mining safety. Darkpulse fiber-based monitoring systems can assist markets that are not currently served, and its unique technology covers extended areas and any event that is translated into the detection of a change in strain or temperature.

Darkpulse (OTC: DPLS) a critical infrastructure solutions technology Company – AS SMART CITIES BECOME A REALITY, DARKPULSE IS THE FOUNDATIONAL TECHNOLOGY TO EMPOWER GLOBAL SYSTEM DYNAMICS  out of New York City that we have been reporting on since January 2001 with a 20,000 sq ft facility in Tempe, Arizona, ISO9001 and AS9100 certified electronics and electro-mechanical assembly operation. Currently the Companys BOTDA dark-pulse sensor technology is being integrated into the Honcut Bridge being built in Loma Rica, near Sacramento, California, in a partnership with the California Department of Transportation (“CALTRANS”). When finished, the bridge will be wired up with cables mapping ‘almost every square inch’ of the structure, allowing engineers to monitor it for safety – and even detect the weight and speed of vehicles driving over it. The Company’s CEO Dennis O’Leary said: “You can put on a VR headset, and virtually walk the structure. You’re able to look down into the bridge and see what’s going on inside, almost like an x-ray. You can zoom in, zoom out, you can flip this thing 360 degrees.

Up next for Darkpulse is the JV Agreement with Cairo based Egyptian Electrical & Mechanical Works Co. that calls for the creation of a jointly owned Egyptian corporation with revenue split between the two partner organizations as well as an exclusive right for DarkPulse’s BOTDA systems to be utilized in real estate and other projects throughout Egypt. Together, both companies believe a new generation of fiber sensors will change the design, concept and implementation methods of future cities and this joint venture represents the first step towards opening the gates to Africa & the Middle East, since Egypt is the leading technology focused country in the region.

To Find out the inside Scoop on DPLS Subscribe to Microcapdaily.com Right Now by entering your Email in the box below 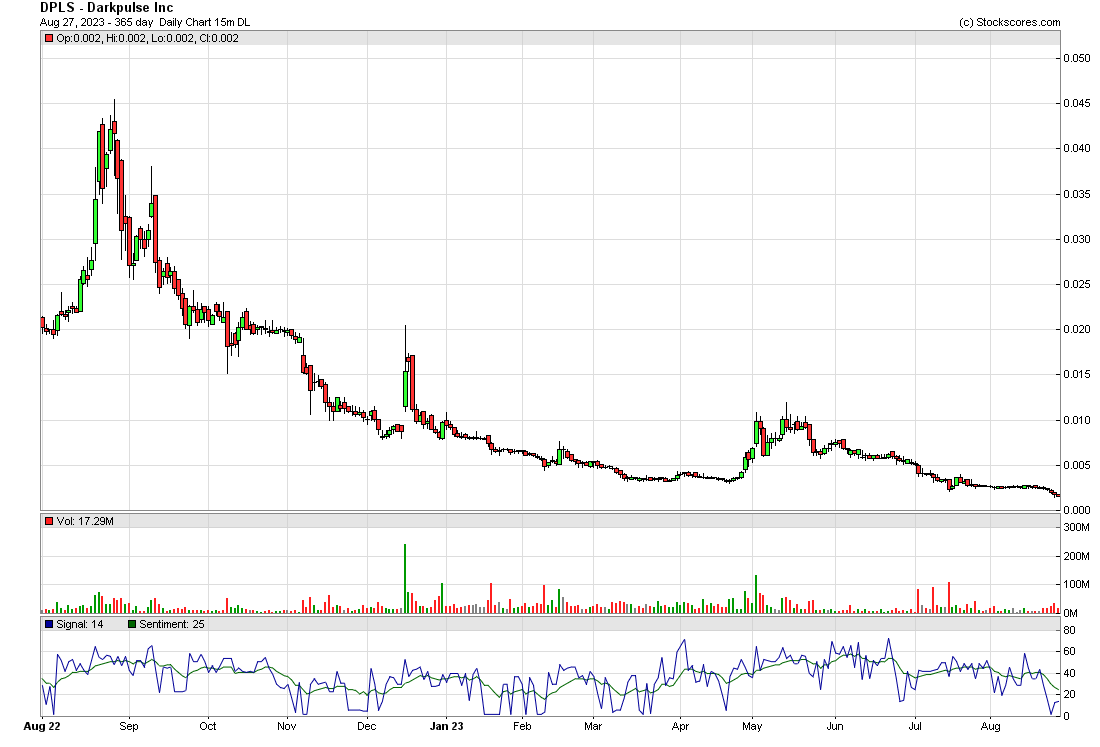 Darkpulse recently pitched its sophisticated fiber-optic ‘smart wall’ cables to Department of Homeland Security officials. Darkpulse technology can create an x-ray-style picture of an area just by burying a small and near-undetectable cable in the ground. The BOTDA Fiber Optic Cable would allow Border Patrol officers to scan miles of the US southern border in real time using VR-headsets. DPLS CEO Dennis O’Leary stated: “We would actually see the footfall of somebody crossing. We could take that bearing and track that person, and then communicate with the security group on the ground and let them know exactly where that intruder is headed. Drones can be placed along a perimeter of the border in a garage. As soon as there’s an alert, we can launch a drone with facial recognition and follow. ‘We have drones that are pilot-driven. The capability of the drone could be a set pattern. Or it could be an autonomous type of deployment – without giving too much away.

CEO Dennis O’Leary also stated:  ‘We are in talks with several agencies. One is Homeland Security. But there’s other agencies that are interested in the tech for monitoring different areas as well.’

Recently Darkpulse secured the major sponsorship position for the sixth annual “Smart Cities Connect” conference that will be held in Washington, D.C. September 26 through September 29, 2022. At least 500 city government representatives and over 1,000 attendees are expected at the conference, which focuses on the development of Smart Cities through Digital Transformation on Architecture and Urbanization.

DarkPulse Chief Executive Officer, Dennis O’Leary, will deliver the keynote address to speak about the launch of the world’s first intelligent piece of infrastructure, the Honcut Bridge in Marysville, California, brought to life by DarkPulse technology. Mr. O’Leary will also speak about DarkPulse’s newest initiative to build Charging Lanes™, which are Smart Roads™ with Electric Vehicle (EV) integrated charging capabilities. Dennis O’Leary stated: “DarkPulse is more than critical infrastructure / key resources monitoring. Our patented high-resolution sensors perform real-time structural health monitoring of infrastructure creating the foundational technology necessary for building and interconnecting smart cities around the world. Our innovative products and services are the forefront of smart technology. Utilizing the power of Global System Dynamics, DarkPulse provides a user interface that is VR-capable, displayed in 3D, and can be used anywhere on any device. It harnesses the power of machine learning to transform the digitalization of cities from challenges to opportunities. Digitalization is the critical step towards future cities and the team at DarkPulse is leading the way to create a better world.”

Richard Erb, Executive Director of Smart Cities Connect made a great point. He said: “DarkPulse’s intelligent infrastructure solutions are a great fit for the SCC Community and the S&L government representatives we serve. The new Infrastructure Law is providing a transformational level of funding for our nations critical infrastructure needs and public safety. SCC is honored that DarkPulse has opted to partner with TechConnect to share their experience and solutions with city leaders across North America.”

$DPLS Our current contracts information is available to read at https://t.co/MlAbqvzwyQ this does not include the December £34M win as the end user would not agree to a PR. Our certifications are also listed on the website as well as each subsidiary at https://t.co/9BItcrdaSo

We have covered a number of penny stocks that really had something great but languished in penny land with a large group of long-suffering longs that one day skyrocketed and made everyone rich. One that we covered on Microcapdaily was NWBO which had sunk to the low $0.20’s in early 2020 and then well below $0.20 in the mid-teens for a few months leading into summer where we reported on it again trying to give hope to the poor longs who all had averages well above the asking price and kept averaging down, before skyrocketing northbound over 1200% and topping out at $2.50 per share in September of that year. And there are many others, some that moved much bigger than NWBO, one of the first stocks covered on this website was AVXL at under a dime on the OTC before moving to the NASDAQ and skyrocketing to over $30 per share. Sometimes it’s just a matter of working through some previous convertible notes, or other large blocks of stock, and the promoter or seller just wants their money right now, they don’t care about the long-term prospects of the Company. And many times, management will keep things quite until the promoter sells all his shares and then bring out the big guns. And when that happens, and there are no more shares coming, and you have an amazing Company, and then the market makers and other naked shorts have to cover, then…the sky is the limit. Microcapdaily reported on DPLS when the stock was less than $0.01 quoting the Company’s CEO Dennis O’Leary, at the time: “Since early 2020 we have made significant progress with the commercialization of our patents as well as building a global presence that will be part of the company’s accelerated entry into global infrastructure markets.” An SEC filer, Darkpulse recently submitted its application to the OTCMarkets Venture Market as part of its plan to trade on larger markets such as NASDAQ. We have previously covered the Companys first quarter revenues of $7.8 million and the type of meteoric growth expected here considering even some of the Optilan contacts including a $42.5 million US contract (34 million British pounds) that the end user would not agree to do a PR on. Recently DPLS acquired Optilan which has secured leases for two new facilities located in Warwickshire in the U.K. DPLS plans to take Optilan public on the New York Stock Exchange (“NYSE”) sometime in 2022 via an initial public offering (IPO). with DPLS management retaining 80% ownership in Optilan. While it’s easy to get excited about the possibilities here that doesn’t change the fact that DPLS is a $0.04 penny stock and of course there are risks. And while many $0.04 penny stocks just come and go there are some that do go on to be great Company’s, True Religion Jeans was one and we have covered many on the website, including HRBR more recently. We will be updating on DPLS when more details emerge so make sure you are subscribed to Microcapdaily so you know get our updates.

Disclosure: we hold no position in DPLS either long or short and we have not been compensated for this article.