Singlepoint Inc(OTCMKTS:SING) is making a powerful move up the charts in recent days since reversing off $0.0026 lows. The stock has a long history of big moves including a historic run in 2017 that we covered here at Microcapdaily.

There is plenty to get excited about on SING as the Company’s subsidiary Direct Solar America expands across the Country and currently operates in 38 states. Singlepoint also has a youtube channel and President Wil Ralston regularly posts video’s there including this exclusive youtube video he made last week reporting: Doubling Revenue and Reducing Debt, Two New Agreements Look to Shakeup SinglePoints Financials For The Next Move Up

Singlepoint Inc(OTCMKTS:SING) operating out of Phoenix, Arizona and focused on growing the Copmany into a multi-national brand, SING is an investment company with a focus on acquiring companies that will benefit from the injection of growth capital and technology integration operating subsidiaries in solar renewables, Hemp and distribution tobacco products. The Company’s subsidiary Direct Solar America is a solar brokerage company headquartered in Phoenix, Arizona and operating in 38 states that currently works with homeowners to define the best solar installation provider and financer for their particular need in multiple cities around the United States. The Company is currently in expansion mode and believes its unique brokerage model is scalable nationally and in its first 10 months of operation has expanded into multiple states and is expected to continue expanding into additional markets.

SING is committed to building the Leading National Solar Network (currently operating in 38 states) focused on Residential & Small Commercial Projects and executing on strategic installer consolidation opportunity. The Company believes that the market opportunity in what is being described as the Solar+ Decade is massive as only 3-4% of the 84 million addressable residential rooftops in the U.S. currently have installed solar systems. The market in smaller commercial (schools, office buildings) is equally as massive with only 3.5% of the addressable commercial locations in the U.S. having existing solar systems.

Singlepoint subsidiaries include its Hemp Cigarette Brands and non-cannibalistic private label products from other CBD manufactures. The Company also owns a mobile web checkout gateway service that allows mobile users to purchase goods and services directly from any web-enabled mobile phone via credit or debit card. Singlepoint owns 51% of the outstanding interests of ShieldSaver, LLC., a technology focused automotive company working to efficiently track records of vehicle repairs. SING subsidiary Discount Indoor Garden Supplies, Inc. (“DIGS”)  is a California-based supplier of cultivation equipment and fulfills orders nationwide. They provide hydroponic supplies and nutrients to commercial and individual farmers. DIGS has an online store, and sells nutrients, lights, HVAC systems, among other products to individuals that are interested in horticulture. They also fulfill and distribute products to business and stores in the southern California market.

To Find out the inside Scoop on SING Subscribe to Microcapdaily.com Right Now by entering your Email in the box below 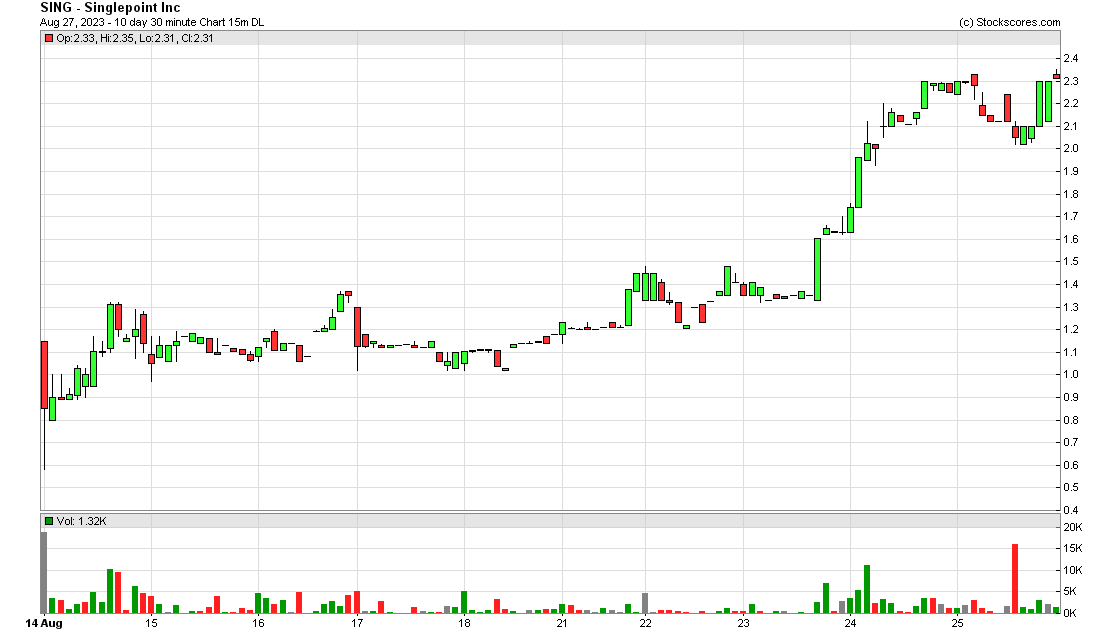 Singlepoint has been making big moves in recent months as the Company is focused on the buildout of its national solar network as well as growing the annual revenues and profitability within its business segments. The Company recently restructured $2 million in debt significantly reducing the Company’s total derivative. SinglePoints majority owned subsidiary, Direct Solar of America, has continued to take advantage of its expanding, nearly national footprint announcing key strategic agreements with Stellar Energy GP and Standard Eco. The agreement with Stellar Energy GP enhances growth opportunities within the 38 states currently covered by Direct Solar of America but most importantly it provides additional access and immediate and accretive growth opportunities within California, the nation’s leading solar market.

According to Singlepoint management: “The agreement with the principals of Standard Eco has the opportunity to increase the gross revenues and profitability. As the market continues to normalize, we believe that this transaction has ability to continue to deliver revenue and profitability results in 2021, 2022, and 2023 comparable with the previously reported unaudited revenues of Standard Eco of $12,331,703 in 2018 and $11,345,061 in 2019. We will continue to pursue similar agreements with other multi-state licensed installers that bolster our service offerings and add additional depth as we leverage and grow our existing solar footprint. Eventually providing services and solutions for the residential and commercial market in all 50 states.

$SING on fire. I think this is just the beginning so pay attention! #stockstowatch #Daytrading pic.twitter.com/dJ2oK5yY7y

Currently trading at a $9 million market valuation SING is pink current and fully reporting with solid revenues clocking in at $1.4 million for the 6 months ended June 30, 2020. SING is an exciting story in small caps; its subsidiary Direct Solar now has many people deployed across 38 states and growing fast and is expanding across the Country. Singlepoint also has a youtube channel located here and President Wil Ralston regularly posts video’s there including this exclusive youtube video he made last week reporting: Doubling Revenue and Reducing Debt, Two New Agreements Look to Shakeup SinglePoints Financials For The Next Move Up. Microcapdaily has been reporting on SING for years including in 2017 when it make its historic run. We will be updating on SING on a daily basis so make sure you are subscribed to microcapdaily.com so you know what is going on with SING.

Disclosure: we hold no position in SING either long or short and we have not been compensated for this article.