DSG Global Inc (OTCMKTS: DSGT) is heating up and skyrocketing up the charts in recent days emerging as among the hottest stocks in small caps. Running off its $0.01 base DSGT has jumped well into the $0.25 range in recent days. Microcapdaily has been covering DSGT since the stock was $0.04.

DSGT is an emerging mover and shaker in the red hot EV sector who recently predicted DSG Global’s New Single Rider Golf Car Orders and Upcoming Installations Should Have Revenue Impact of Over $15M annually. Management has been working hard behind the scenes clearing out the convertible debt. Rick Curtis, DSGT President recently stated; “We are excited to finally be entering the electric vehicle space. While it has taken more time than anticipated to become operational, the company will be selling hundreds of vehicles each month. The first orders for the Low Speed Electric Vehicles is being prepared for release with the manufacturer.”

DSG Global Inc (OTCMKTS: DSGT) based in Surrey, British Colombia operates throug its subsidiary Vantage Tag Systems, a global leader in the design, manufacture, and marketing of fleet management solutions for the golf industry, as well as commercial, government and military applications. The company has developed the TAG suite of products that represents a major breakthrough as the first completely modular fleet management solution for the golf industry. Vantage Tag Systems suite of products is currently sold and installed around the world in golf facilities and commercial applications through a network of established distributors and partnerships with some of the most notable brands in fleet and equipment manufacture. The Company owns a number of patents related to its technology and products. For a full list of DSG products go here.

DSG Global is expanding the PACER single rider golf cart program. Recent developments now allow the company to enter the worldwide market with the PACER through its sales and distributor program. Vantage Tag now has an agreement for worldwide distribution for the new in demand Pacer. The company is still targeting several thousand of these vehicles to be leased/sold and in the program designed for revenue share with the golf course. A program that guarantees an increase in the PACE OF PLAY and generate revenues for the golf course at the same time. Additionally, a number of product upgrades are forthcoming. The new 4G Tag is complete and available for sale/lease now. The first ever 12” INFINITY HD roof mount will also be available during next month. DSGT recently said it will be announcing a new expanded lineup of vehicles soon to arrive. Due to recent growth and expansion, the company has recently moved into new facilities. The complex, still located in Surrey, includes warehousing, larger engineering space and more office space with all parties in one complex.

DSGT operates in the booming “EV” market. According to a report published in June by ResearchAndMarkets.com titled the “Electric Cars Global Market Report 2020-30: COVID-19 Growth and Change””The global electric cars market is expected to decline from $533.4 billion in 2019 to 515.8 billion in 2020 at a compound annual growth rate (CAGR) of -3.31%.

To Find out the inside Scoop on DSGT Subscribe to Microcapdaily.com Right Now by entering your Email in the box below 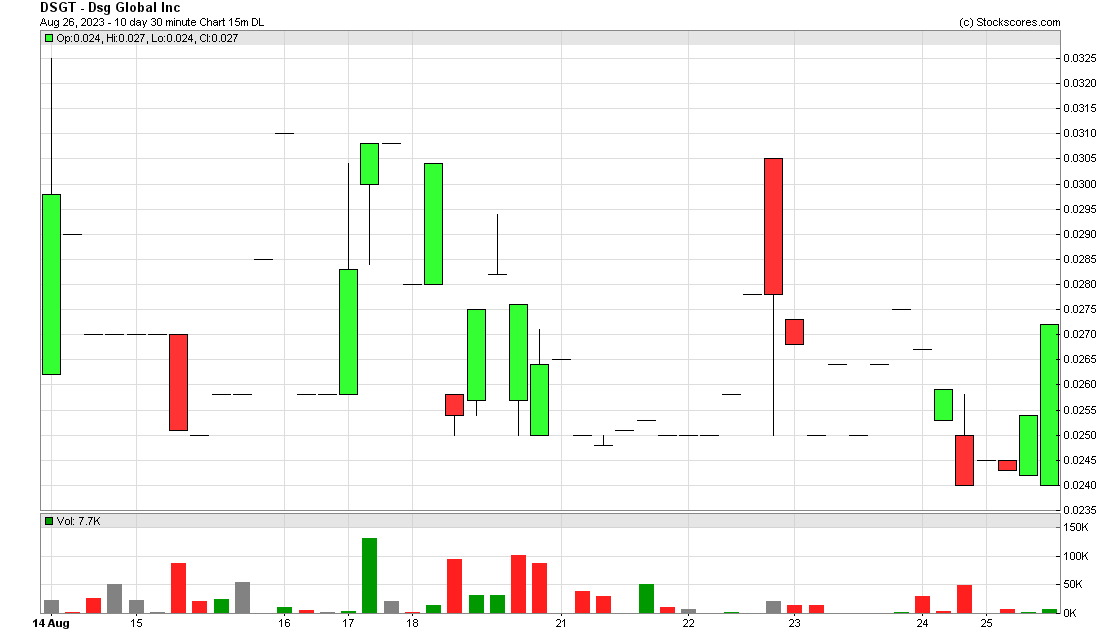 DSG Global Inc subsidiary automobile division Imperium Motor Corp., announced that they have placed the initial order for electric vehicles. This includes a combination of the all new High-Speed SUV including the ET5 and other new models as well as our Low Speed Vehicles. The first of many high speed versions coming to Imperium is the new ET5 SUV electric vehicle (picture attached) compliments the T-shaped cockpit using a wrap-around design, with a three-spoke multifunction steering wheel. The digital dashboard fits on a 12.3-inch full LCD display with an additional monitor with a diagonal of 12.8-inch, allowing you to watch TV shows. The cruising range calculated as part of the NEDC European driving cycle reaches 500 km. ET5 will be equipped with a HEPA air conditioning filter system, which can filter 99.99% of PM2. 5 particles larger than 0.3μm and achieve a filtering effect comparable to N95. Combined with a series of high-temperature cycle sterilization and negative ion generators to ensure the safety of air in the car, it can effectively eliminate bacteria in the car, establishing a healthy SUV for buyers, and creating a safe and comfortable mobile space.

The Company also reported it upgraded its fleet management products for Peninsula Sanitation Service, Inc. vehicles used primarily at Stanford University. Peninsula Sanitation offers frontloader garbage and cardboard dumpster service, roll-off bins, recycling, composting, trash bin and cart service, residential collection, and street sweeping to the Stanford University campus. In addition, they do bulky item pick up and operate the Stanford Recycling Drop Off Center. The numerous Tag Systems will be used for tracking the location of their fleet.

$DSGT I like watch Sykes students at end of day explain how they mis-traded this and left so much on the table lol. DO SOME REAL RESEARCH!!! pic.twitter.com/S2ERXTykkY

Microcapdaily reported on DSGT this past Friday morning when it was $0.04 but the article did not get much exposure.

For more on DSGT Subscribe to MicroCapDaily Right Now!

Currently moving northbound in a hurry DSGT is fully reporting OTCQB having recently up-listed from a lower exchange. DSG Global is a really exciting story developing in small caps; DSGT is an emerging mover and shaker in the red hot EV sector who recently predicted DSG Global’s New Single Rider Golf Car Orders and Upcoming Installations Should Have Revenue Impact of Over $15M Annualy. Managment has been working hard behind the scenes clearing out the convertiable debt. Rick Curtis, DSGT President recently stated; “We are excited to finally be entering the electric vehicle space. While it has taken more time than anticipated to become operational, the company will be selling hundreds of vehicles each month. The first orders for the Low Speed Electric Vehicles is being prepared for release with the manufacturer. DSGT has a remarkably low float; according to OTCMarkets Group there are just 29,879,296 shares outstanding in DSGT and many of these are restricted. While DSGT is little known the EV space is so hot many in the sector trade for billions and still don’t have a finished product. We will be updating on DSGT when more details emerge so make sure you are subscribed to Microcapdaily so you know what’s going on with DSGT.

Disclosure: we hold no position in DSGT either long or short and we have not been compensated for this article.