Infrax Systems Inc (OTCMKTS: IFXY) has been trending upwards in recent weeks and looks to be under accumulation. The stock has already proven to be a runner skyrocketing out of sub pennyland last year and running to highs of $0.0157. While many subs that ran into copper land last year when the market heated up have all retracted IFXY has held its ground just under half a penny. The stock also has a loyal following of investors who see this one going much higher. It does have a fairly strong share structure with just 2,063,229,521 free trading IFXY shares worth $9.5 million at the last closing price.

IFXY has been busy behind the scenes and is looking to go fully reporting OTCQB as per new management Mr. Jose Pineda. A recent twitter update stated: “Paperwork is just about wrapped up for $IFXY, we look forward to the journey ahead. Be on the lookout for changes to OTCM and the start of official updates via new wires. We appreciate your patience, and look forward to building huge value for shareholders. #NoRS #NODilution. The no dilution part is important although there are sellers, as IFXY has $0 debt there are no note holders though. IFXY new CEO and majority owner is seasoned executive and serial entrepreneur Jose Pineda who took his Company “Mi Pulpa” a master distributor of foods to Latin American countries to $22 million in annual revenues. Currently he serves as a board member for Alnost Brokerage LLC, CEO of Toditito Llc, CEO and board member of REME Enterprises LLC and majority owner and CEO of IFXY. There is a twitter thread here that explains more on Mr. Pineda here. Infrax Systems Inc (OTCMKTS: IFXY) is a clean “pink current” reverse merger candidate with $0 debt on the books. The Company was incorporated in Nevada on October 22, 2004. On January 10, 2010, it officially changed the name of the Company from OptiCon Systems, Inc. to Infrax Systems, Inc. to reflect the change in the Company’s direction and were issued a new trading symbol as “IFXY”. At that time the Company was involved in the “Smart Grid” energy sector. The Company believed at that time that its integrated platform will hasten the deployment of all Smart Grid technology for resource constrained small and mid-sized utilities.  Infrax’s advantage comes from its products ability to enable the creation of a secure platform scalable to deliver a broad set of intelligent Smart Grid initiatives across millions of endpoints for Utilities.

The last press release from the Company was March 6, 2018 when they announced a shareholder update which included its first two ICOs that the company has invested and providing ICO consulting services for. The Company has signed agreements with two promising ICO; Nuvus Blockchain and Galleon Quest. According to new management once they get onto OTCQB they wil beging to regularly update shareholders.

Paperwork is just about wrapped up for $IFXY , we look forward to the journey ahead. Be on the lookout for changes to OTCM and the start of official updates via new wires. We appreciate your patience , and look forward to building huge value for shareholders. #NoRS #NODilution

To Find out the inside Scoop on IFXY Subscribe to Microcapdaily.com Right Now by entering your Email in the box below 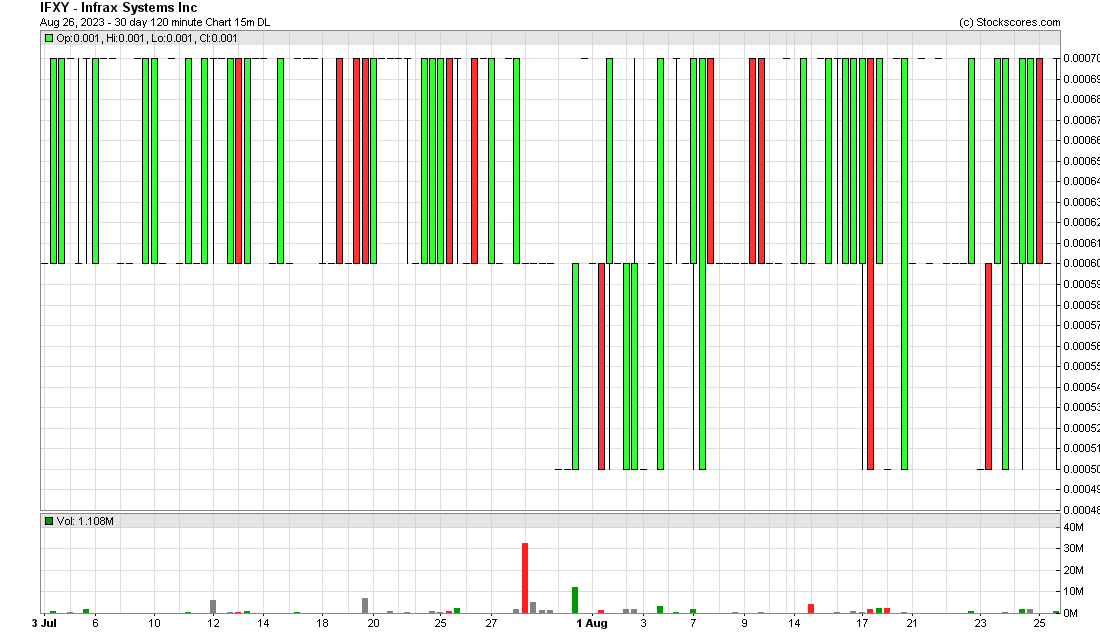 Microcapdaily covered IFXY on October 3, 2021 as the stock was making its move to $0.0157 highs reporting at the time: “As we have been saying for a while now reverse merger plays can be more explosive than biotech’s when the incoming Company has real value but is undiscovered to investors. It’s easy to get excited about IFXY which recently went “pink current” after being acquired by Carey Cooley and Krisa Management LLC the winning team behind such recent runners as FBCD, AVVH, and SNRY. Krisa has big plans here recently calling IFXY their “baby” and stating “We have big plans for $IFXY. Great team is coming together. Details once we complete the transactions for our other shells. We will be hot and heavy on this one building a great company over the next few years.”

According to his profile on linkedin: “I have spent the last twenty years building and serving as an executive or board member to a wide variety of organizations. I have worked in several different industries and have a wide range of technical knowledge in fields such as hospitality, supply chain, and technology that has helped me to build and grow multiple companies. As an immigrant, I take a lot of pride in helping others with similar backgrounds like mine and love to work with people from all different cultures around the world. I have a strong entrepreneurial mindset and look forward to connecting with like-minded individuals on here”

Currently trading at a $25 million market valuation IFXY has 5,530,894,237 shares outstanding much of which are restricted leaving 2,063,229,521 free trading IFXY shares worth $9.5 million. IFXY is an exciting story here; headed by a new CEO seasoned executive and serial entrepreneur Jose Pineda who took his Company “Mi Pulpa” a master distributor of foods to Latin American countries to $22 million in annual revenues. Currently he is running several private Company’s and buying a public shell is a large expenditure, not taken lightly and clearly Mr. Pineda has a plan for IFXY and once the official updates start and that plan is laid bare, whether it is reverse merging one of his own Company’s into IFXY or another, things will start to get very exciting here and shareholders currently accumulating should be rewarded.  We will be updating on IFXY when more details emerge so make sure you are subscribed to Microcapdaily so you know what’s going on with IFXY.

Disclosure: we hold no position in IFXY either long or short and we have not been compensated for this article.