Humbl Inc (OTCMKTS: HMBL) is on the move northbound since a brief dip below a dime last week touching a low of $0.087 before reversing to the upside. A dime looks cheap for a stock that was the biggest runner of 2020 skyrocketing from sub pennies starting as TSNP and running to multi dollars as HMBL at one point achieving a market cap of $1 billion dollars plus hitting highs of $7.72 post-split. HMBL has a massive following of investors behind it and can run quick, the stock is a volume leader on the OTC and regularly among the top most traded stock in small caps. HUMBL is made up of team members from Company’s like Moneygram, Visa, Microsoft, Western Union American Express, Epson, Qualcomm and Facebook and was named a Forbes “Rising Startups to Watch” in June 2020. The Company has a powerful management team behind it led by CEO Brian Foote. Recently they brought back stock whizz George Sharp as Capital Markets Advisor who will shepherd HUMBL through the application process to the NASDAQ Stock Market. Since bringing back Mr. Sharp HMBL achieved the OTCQB tier earlier this month.

A lot has been happening at HUMBL; they added new team member ‘BLUE’ from the Bored Ape Yacht Club (BAYC). BAYC is the first generative NFT franchise to ever reach $1 billion in total sales, with notable collectors such as Stephen Curry, Madonna, Post Malone and more. They launched a pilot program with the County of Santa Cruz, California to develop a digital wallet. The program will be customized at the request of the County to experiment with the streamlining and equitable distribution of city services to all of its constituents via mobile wallet. The initial pilot program will include the infrastructure for a digital wallet and expanded to serve the needs of the community as the County sees fit. The initiative was sponsored by Supervisor Zach Friend and approved unanimously by the County Board of Supervisors in their meeting on April 12, 2022. The program will be delivered and reported back on no later than August 9, 2022. Management has also significantly reduced its debt balance by exchanging promissory notes for common stock. On March 28, 2022, HUMBL entered into exchange agreements with various noteholders. Pursuant to such agreements, HUMBL exchanged promissory notes representing $3,176,804.61 in outstanding debt obligations for 37,374,172 shares of common stock.  In addition to the note exchange, on March 30, 2022, HUMBL received a $1,500,000 investment from Sartorii, LLC. The company currently sits at an updated cash position of $5 million as a result. Since going public via the RM with TSNP HUMBL has made a number of acquisitions including Tickeri, a leading ticketing, live events and box office SaaS platform featuring Latin events and artists throughout the United States, Latin America, and the Caribbean corridor. HUMBLE also acquired Monster Creative, LLC; a Hollywood production studio that specializes in producing movie trailers and other related content. On December 21, Monster Creative reported it has won two awards at the 2021 Clio Awards, as well as one nomination.  In February the Company acquired the mobile identification, verifiable credentials and blockchain tokenization platform of BizSecure, as well as its employee and consulting resources. With this extensive acquisition, HUMBL will form a new commercial division called HUMBL Blockchain Services™, which will introduce and deliver blockchain corporate and governmental solutions. They also acquired Ixaya Business SA de CV, a Mexico-based firm with over 15 years of experience in developing software and IT solutions for the automotive, banking, payments, financial services, oil and gas, real estate, and cybersecurity sectors. With this acquisition, HUMBL gained direct access to more than thirty-five (35) Ixaya technology team members specializing in product design, front-end engineering, back-end engineering, dev ops and blockchain development. Tickeri has seen great enthusiasm for live events in 2021, with growth in recent months already surpassing pre-covid numbers. “The momentum and bounce back we’ve seen recently have been impressive, and we’re super excited to continue expanding the Latin music market in the United States and abroad,” said Juan Luis Gonzalez, CEO of Tickeri. Tickeri is a ticketing and SaaS platform that features Latin events and artists within the United States, Latin America, and the Caribbean corridor. Tickeri is one of the only event ticketing companies to focus on the Latin market, offering advanced features such as real time reporting, analytics, box office tools, and a marketing platform with over 5,000 locations and operators.

To get an inside look at HMBL Subscribe to Microcapdaily.com immediately by entering your Email below 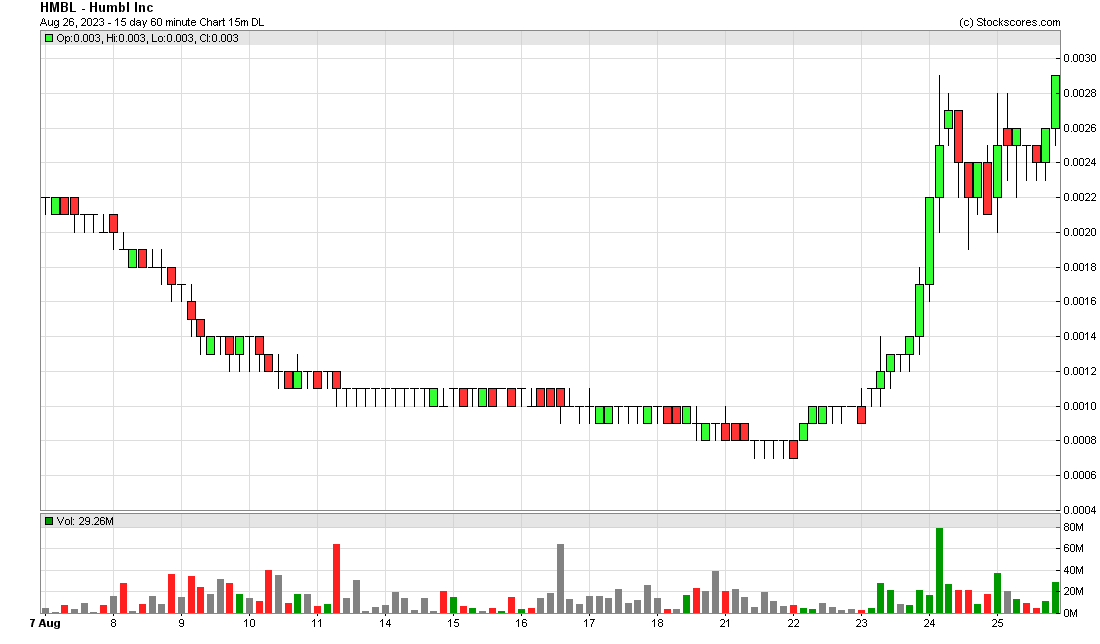 Since our last article on HMBL the Company has been busy in the booming NFT space; they dropped the multimedia NFT with music, video and merchandise integrations with award-winning recording artist ‘Monty’ The drop reflects a collaboration between HUMBL and Monty to deliver an NFT that also provides access to unique experiences and chances to win merchandise and tickets to upcoming shows. The NFT uses music and video from the Remy Boyz new track, “The Reunion” and is an exclusive offering via HUMBL. All NFTs will be “Verified by BLOCKS” to establish the on-chain provenance of the NFT for fans and collectors on the blockchain. This is certainly not the first time HMBL has worked with celebrities; they signed up Nick Carter; the Grammy-nominated artist who has sold over 130 million records as both a solo artist and as a member of the Backstreet Boys. HMBL is also working with Trevor Etienne, a 4-star running back recruit from Jennings, Louisiana. Monty is currently the CEO of the Remy Boyz record imprint and company. Beyond Fetty Wap, artists on the imprint include newcomers such as Chaos and Tap. Monty’s rhymes first hit Billboard with the Fetty Wap track and video “679,” with featured verses from Monty. Monty’s hard voice and rhymes are a perfect counterpoint to Fetty Wap’s unique sing-song delivery on the hook, and the official release in June 2015 saw the single shoot to number 4 on the U.S. Billboard Hot 100 chart. The song charted even higher on the US Rap Songs chart, reaching number 2, and selling over a million domestic copies in the next several months. With the track spurring a number of remixes, the video proved immensely popular as well, gaining 100 million views on YouTube in its first six months. Monty appeared with The Roots and Fetty Wap on The Tonight Show Starring Jimmy Fallon in September 2015, performing “679” to fans worldwide. The NFT space is booming and quickly becoming the hotshot of the industry, brands and celebs endorsing it, the NFT space topped $40 billion in 2021 and is expected to continue to grow. Non-Fungible Tokens (NFT) are cryptographic tokens that generate value because of their uniqueness. From tangible to intangible items, owning an NFT is like owning an original art or a collectable antique. Traditional paintings, images, video clips, tweets selling for millions have paved the way for a revolution that has become a digital autonomous asset creation and redistribution. The difference between owning a physical collectable like a Pokémon card and a digital asset like NFT is that NFTs contain distinguishable information that distinguishes them from any other NFT and is easily verifiable. As each item could be traced back to its original creator, the duplication and circulation of fake collectables become pointless. No two NFTs are identical. Unlike tangible real-money or digital cryptocurrencies, NFTs can’t be directly traded with one another, even if they exist on the same platform, game or collection.

On April 21 HMBL announced it has acquired the HUMBL.com domain name. The domain name purchase and transfer process was facilitated by HUMBL Blockchain Services and eWeb Development. Management could not be more excited as they have been working tenaciously to obtain the HUMBL.com domain name for several years now. CEO, Brian Foote stated: “We formed HUMBL to deliver a global, consumer brand that is synonymous with Web3 and that allows customers to begin using blockchain in simple ways on our web platform. Having the HUMBL domain name is a pivotal step forward in that journey.

Sorry for the deletion of the previous version, but we have to update to avoid any trademark infringements. $HMBL #HUMBL #BLUE pic.twitter.com/aPG8SyDBvC

Currently trading at a $156 million market valuation HMBL has 1,421,055,639 shares outstanding. Fully reporting OTCQB tier on OTCMarkets thanks to George Sharp, HMBL has a cash position of at least $5 million, does have some debt too and $2,503,388 in sales (pre-acquisitions) in fiscal 2021. HMBL is easily one of the most exciting stocks in small caps, it was the biggest reverse merger of 2020 and the biggest runner of 2020 skyrocketing from sub pennies starting as TSNP and running to multi dollars as HMBL at one point achieving a market cap of $1 billion dollars plus hitting highs of $7.72 post-split. HMBL has a massive following of investors behind it and can run quick, the stock is a volume leader on the OTC and regularly among the top most traded stocks on the OTCQV exchange. Currently trading withing 2 cents of 52-week lows HMBL has not retested support levels since the initial low of $0.087 in February. To the upside, HMBL, this stock has runner in its blood and has a massive gap to fill, it’s got the biggest audience on the OTCQB who will buy back in as soon as it makes a definitive move up, it’s got George Sharp and CEO Brian Foote behind it, and HMBL has not seen any significant bounce or reversal since bottoming out at a dime; once HMBL makes a real move northbound it could be a powerful, highly explosive and legendary move. Microcapdaily was among the first on the scene when TSNP started moving northbound reporting on TSNP on November 15, 2020 when the stock was $0.003 with our article: “HUMBL RM; the Rise of Tesoro Enterprises, Inc. (OTCMKTS: TSNP)“ We will be updating on HMBL when more details emerge so make sure you are subscribed to Microcapdaily so you know what’s going on with HMBL.

Disclosure: we hold no position in HMBL either long or short and we have not been compensated for this article.