Humbl Inc (OTCMKTS: HMBL) has formed a new base around $0.03 after reversing off new 52-week lows of $0.0265 on Monday. HMBL was one of the biggest runners of 2020 skyrocketing from sub pennies when it was TSNP and running to multi dollars as HMBL at one point achieving a market cap of $1 billion dollars plus. The stock has come down a long way since then and investors are hoping Mondays new 52-week lows were the bottom. Currently trading at a $52 million market valuation HMBL is made up of team members from Company’s like Moneygram, Visa, Microsoft, Western Union American Express, Epson, Qualcomm and Facebook and was named a Forbes “Rising Startups to Watch” in June 2020.

The last time we reported on HMBL was back in July when the Company was launching its much-awaited NFT collection #NFTClassic which joins a now growing list of HMBL products including its web 3, blockchain platform, Search3, HumblWallet, HumblPAY & Humbl Tickets. More recently HMBL cancled its planned acquisition of Acquire Agora Digital Holdings, Inc., launched the “House of Hayes” Brand Metaverse Store and HMBL CEO Brian Foote retired 45,000 shares of Series B Preferred Stock that he owns, which is the equivalent of 450,000,000 shares of common stock. HUMBL CEO has sold zero shares of the company and has now retired the equivalent of over 770,000,000 of personally held common shares to assist with reduced dilution in the company. Humbl Inc (OTCMKTS: HMBL) is a Web 3 blockchain company with consumer and commercial divisions. The company offers a HUMBL Mobile Pay app, HUMBL Search Engine and HUMBL Marketplace.  HMBL went public via a reverse merger with TSNP the biggest runner of 2020 before changing its name to HUMBL.

HMBL has seen significant growth through acquisition completing the purchase of Tickeri, Inc., a leading Latin-focused ticketing platform and Ixaya Business SA de CV, a Mexico-based firm developing software and IT solutions, Monster Creative, LLC; a Hollywood production studio that specializes in producing movie trailers that recently won two awards at the 2021 Clio Awards, as well as one nomination as well as the mobile identification, verifiable credentials and blockchain tokenization platform of BizSecure, as well as its employee and consulting resources.  HMBL also completed the acquisition of Ixaya Business SA de CV, a Mexico-based firm with over 15 years of experience in developing software and IT solutions for the automotive, banking, payments, financial services, oil and gas, real estate, and cybersecurity sectors. With this acquisition, HUMBL obtains direct access to more than thirty-five (35) Ixaya technology team members specializing in product design, front-end engineering, back-end engineering, dev ops and blockchain development.

HUMBL is led by CEO Brian Foote who is well known in the crypto community and brings with him twenty years of consumer technology experience, having launched a number of top ranked global technology products at companies like Epson, where he was twice named to the Innovators Team Award for his work across merchant partners such as Amazon, Walmart, Costco, Target and Best Buy. In recent months Brian Foote has reduced the share count by at least 800 million and pledged not to dilute the stock in the future.  HMBL has also brought Mr. George Sharp back as Capital Markets Advisor. Mr. Sharp will shepherd HUMBL through an imminent application with OTC Markets for an advancement to the OTCQB tier and then towards an application to the NASDAQ Stock Market. In furtherance of these milestones, the company will file audited financials with the SEC beginning with the yearend statement for 2021.

The last time we reported on HMBL in June was an exciting time for the Company as they were launching the much-awaited NFT collection #NFTClassic on July 9 which will join a now growing list of HMBL products including its web 3, blockchain platform, Search3, HumblWallet, HumblPAY & Humbl Tickets. The Company is also signed a brand endorsement relationship with Myles Garrett to promote its Web 3 blockchain platform. To kick off their work together, HUMBL is launching a limited-edition Myles Garrett NFT Collection, currently scheduled for late July 2022, making use of core HUMBL Wallet, HUMBL Search Engine and HUMBL Marketplace product lines. The Myles Garrett NFT Collection will feature authentic NFTs with creative media including original art and accompanying sound. Myles Garrett is an American football defensive end for the Cleveland Browns of the National Football League (NFL). He was selected as the #1 overall draft pick in the 2017 NFL Draft. Previously HMBL has worked with a number of celebrities including Nick Carter among others.

Microcapdaily was among the first on the scene when TSNP started moving northbound reporting on TSNP on November 15, 2020 when the stock was $0.003 stating at the time: “Tesoro Enterprises, Inc. (OTCMKTS: TSNP) is a clean shell operating out of Oklahoma City, Oklahoma. The Company recently announced it has entered into an agreement with HUMBL, LLC to merge the two entities. In an all-stock transaction, the members of HUMBL will receive preferred shares of Tesoro in exchange for their HUMBL holdings. The mission of HUMBL® and HUMBL Hubs™ is to deliver high quality, low cost digital payments and financial services. The HUMBL network was designed to disrupt entrenched regional banks, wire services and roadside finance providers in emerging markets such as Latin America, Caribbean, Asia and Africa to help reduce costs and improve settlement speeds for customers. HUMBL maintains offices in San Diego (HUMBL – North America), Mexico (HUMBL – Latin America), Miami (HUMBL – Caribbean and Africa), and Singapore (HUMBL – Asia Pacific and Oceania Region) and has created a global network of regional affiliates, who stand ready to implement sales and marketing programs in these corridors. The HUMBL® Mobile App delivers borderless transactions, by integrating multiple currencies, payment methods, banks and financial services providers into one-click for the customer. HUMBL® provides greater access and portability than US only mobile wallet providers, such as Venmo® and Zelle®.“

To get an inside look at HMBL Subscribe to Microcapdaily.com immediately by entering your Email below 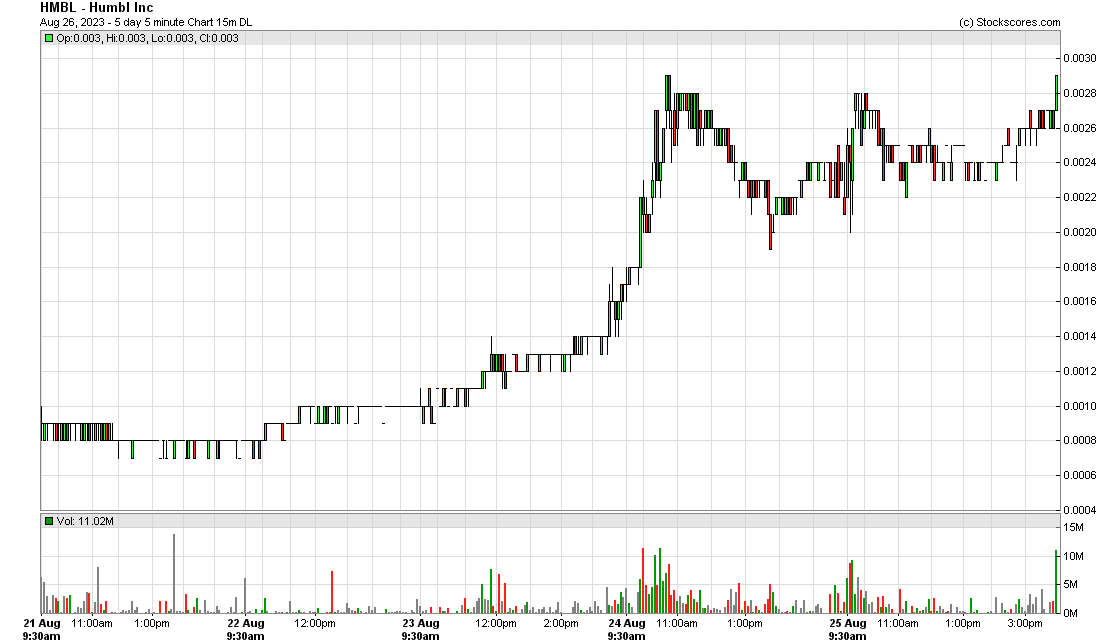 Earlier this year HMBL said it will be launching a personalized, 3D brands metaverse store called “House of Hayes” with Major League Baseball (MLB) player Ke’Bryan Hayes of the Pittsburgh Pirates and his father, Charlie Hayes, who played 14 years in the big leagues and won the 1996 World Series as a member of the New York Yankees. Ballengee Group represents a number of MLB players including Alek Manoah, Jordan Lyles, James McCann, David Fletcher and more.

The brand store metaverse environment will initially be available on desktop across modern browser types, as well as interactive headsets, allowing customers to engage with 3D interactive content around the life and baseball careers of the Hayes Family, as well as discover and shop for the preferred products of Ke’Bryan Hayes from brands such as Wilson, Franklin, Digmi, Old Hickory and New Balance. In the brand metaverse store, customers are able to walk the Ke’Bryan Hayes avatar through various rooms of the “House of Hayes,” learning more about the life and sports careers of the Hayes family, as well as shopping for their favorite brands and endorsed products such as the Wilson A2000 glove, Franklin batting gloves, Digmi Apparel, Old Hickory baseball bats and New Balance baseball cleats.

All collectibles will be “Verified by BLOCKS” on the BLOCKS Registry, which has been developed to combat fraud, forgery and lifecycle intellectual property management around signed merchandise and collectibles. The first version of the “House of Hayes” 3D brand metaverse store is currently in beta testing and expected to open before the end of the Major League Baseball 2022 regular season.

On September 21 HMBL announced its CEO Brian Foote has elected to retire 45,000 additional shares of Series B Preferred Stock that he owns, which is the equivalent of 450,000,000 shares of common stock. The market value of these shares based on the prior trading day’s closing price is approximately $13,500,000 (USD).

Mr. Foote has previously retired a combined total of approximately 324,917,333 common shares from the float in November 2020, July 2021, and March 2022, also at his own personal cost. In summary, Mr. Foote has sold zero shares of HUMBL stock and has now retired the equivalent of approximately 774,917,333 common shares. The purpose of this share retirement is to reduce the overall HUMBL share count and attempt to reduce HUMBL shareholder dilution as the company pursues its fundraising and acquisitions strategies.  The share cancellation request was submitted on Wednesday, September 21, 2022 to the company’s transfer agent, Pacific Stock Transfer.

CEO Brian Foote stated: “This action will further facilitate our flexibility to perform consumer marketing partnerships, merger and acquisition strategies, as well as the capital formation of the company.”

$HMBL CEO has sold zero shares of the company and has now retired the equivalent of over 770,000,000 of personally held common shares…https://t.co/PBjWfHPjXE

Currently trading at a $52 million market valuation HMBL has 1,775,957,234 shares outstanding and $1.9 million in the treasury and $32 million in liabilities, this is a lot of debt for any OTC stock to overcome. The Company is doing revenues reporting $2.2 million in sales for the 6 months ended June 30, 2022. As we have reported HMBL was one of the biggest runners of 2020 skyrocketing from sub pennies when it was TSNP and running to multi dollars as HMBL at one point achieving a market cap of $1 billion dollars plus. The stock has come down a long way since then and investors are hoping Mondays new 52-week lows were the bottom. Considering how far HMBL has fallen the stock could see some significant bounces. The Company went hard into the Metaverse space just as interest in the space fell off a cliff. Microcapdaily was first on the scene when TSNP started running reporting on the stock on November 15, 2020 when the stock was around $0.003. We will be updating on HMBL when more details emerge so make sure you are subscribed to Microcapdaily so you know what’s going on with HMBL.

Disclosure: we hold no position in HMBL either long or short and we have not been compensated for this article.