PHIL has been busy even as the stock has been dropping, as we have said PHIL is due for a reversal here; the Company held a ZOOM PHI Group Shareholder Update Conference Call on April 22 at 4:30 P.M. EST to discuss the above topics in greater detail as well as the Company’s convertible notes, financial and operational plans, and other areas of interest.  Also, contrary to some rumors and speculations, the Company has no plan to effectuate a reserve split of its stock. Just over the past 3 weeks PHL signed an MOU with Material One-Member Ltd. Co. No. 27 “(“COMA27”), subsidiary Empire Spirits will be launching the first U.S. distilled USDA organic baijiu, a joint venture with Five-Grain Treasure Spirits Co., Ltd., (“Five-Grain”). Management has been working hard to get the financial audits of Vinafilms completed however this has taken longer than anticipated. Also, this past week subsidiary (www.co2-1-0.io), reported the listing of CO2-1-0 (CARBON) CORP, a subsidiary of the Company, on DigiFinex Digital Assets Exchange (https://www.digifinex.com/en-ww/) Will become effective at 11:00 AM Singapore time (GMT+8) on Friday April 22, 2022.

PHI Group, Inc. (OTCMKTS: PHIL) is a diversified holding company currently engaged in PHILUX Global Funds, a group of Luxembourg bank funds organized as “Reserved Alternative Investment Fund” (“RAIF”), and the Asia Diamond Exchange (“ADE”) project in Vietnam. The Company also engages in mergers and acquisitions and invests in select industries and special situations that may substantially enhance shareholder value. Microcapdaily has written about PHIL many times with different articles based on different aspects of the Company, you can find all PHIL articles on the website on the homepage, just put PHIL in the search field.

In August of last year CEO Henry Fahman substantially increased his stock ownership in the Company. On August 19, 2021 Henry Fahman converted $500,000 of the loan that he made to PHI Group on 02/07/2020 into 103,279,112 shares of restricted Common Stock of PHI Group, Inc. to increase his direct ownership in the Company. A Form 4 will be filed with the Securities and Exchange Commission to report the transaction.

PHI Group has been busy although this has not been reflected in the stock price; PHI LUXEMBOURG DEVELOPMENT S.A., a wholly-owned subsidiary of the Company, which serves as the mother holding company for PHILUX GLOBAL FUNDS, has signed a Memorandum of Agreement with “Building and Construction Material One-Member Ltd. Co. No. 27 “ (“COMA27”), a company belonging 100% to the Ministry of Construction of Vietnam, for COMA27 to participate in the Public Private Partnership (PPP) with PHILUX Asia Diamond Center Development Fund in order to organize the Asia Diamond Exchange in the Free-trade Zone of the Chu Lai Open Economic Zone, Quang Nam Province, Vietnam.  The Company has been working diligently to set up a diamond exchange in Vietnam according to the model of Dubai’s DMCC https://www.dmcc.ae/. The Asia Diamond Exchange is a modern bourse to be established in affiliation with the World Federation of Diamond Bourses (WFDB). It will be the first-ever vital rough diamond exchange in Asia, comparable to the diamond exchanges in Antwerp (Belgium)  and Dubai (UAE). The Company has launched an ADE token in South Korea in connection with the Asia Diamond Exchange. The token is designed to optimize transparency and fair pricing to the diamond industry to provide enhanced benefits to all stakeholders. By validating transactions on a blockchain, there are no chances of counterfeiting or substandard pieces. Consumers will be able to design and purchase custom diamond jewelry and loose gemstones at significantly better prices by using the ADE tokens. The ADE tokens will be deflationary by setting aside profits to purchase and burn tokens as well as systematically continuing the buy-back of PHIL stock on an ongoing basis in the future. International investors may purchase and trade the tokens once they are listed on top exchanges such as Coinbase and Binance.

$PHIL https://t.co/LOoQYZKDqi.
Conference call will be held after market closing on Friday. Will confirm exact time via press release or tweet. GB! 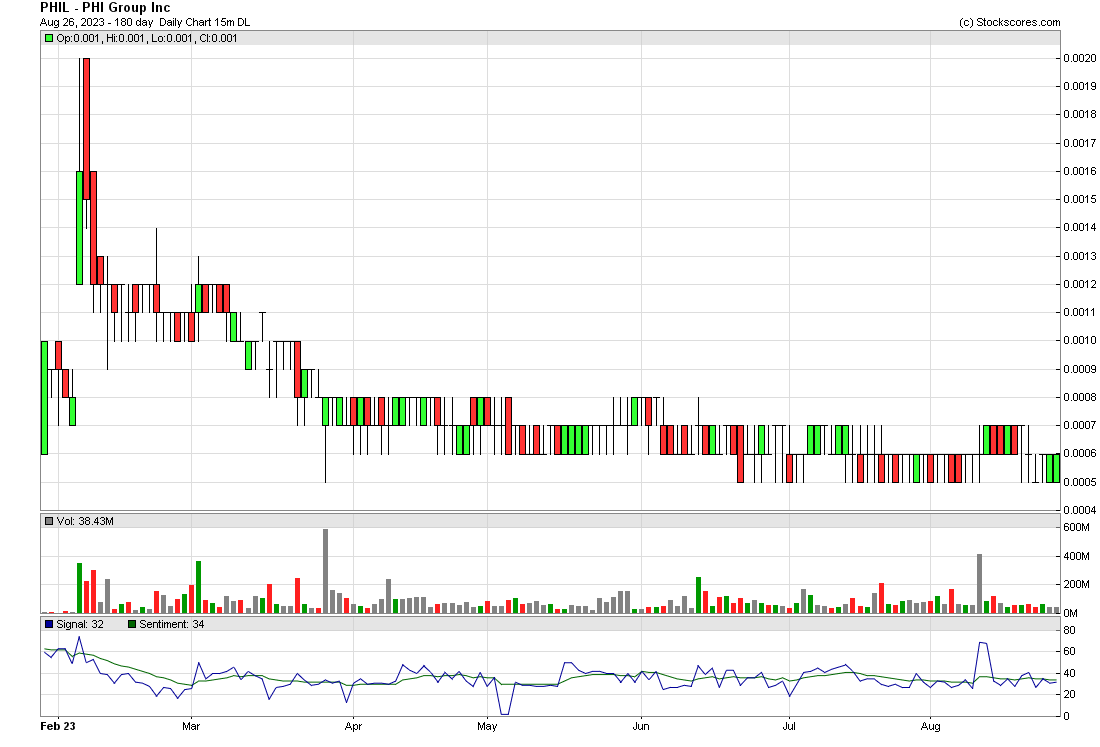 The financial audits of Vinafilms have taken longer than anticipated due to additional work associated with a previous merger between Vinafims and another local plastic manufacturing company. PHI Group’s auditor Dylan Floyd Accounting & Consulting has recently engaged ASC Auditing Company Limited to assist in the audit process and expects to finish the audits of Vinafilms’ financial statements in time to allow PHI Group to consolidate Vinafilms’ operating results with those of PHI Group for the quarter ending March 31, 2019. PHI Group is also awaiting the results of an independent valuation of Saigon Pho Palace JSC in order to close the acquisition of a majority interest in this company.  PHI Group will be able to consolidate operating results of Saigon Pho Palace JSC after the GAAP audits of Saigon Pho Palace’s financial statements are finished.

The Company’s subsidiary Empire Spirits will be launching the first U.S. distilled USDA organic baijiu, a joint venture with Five-Grain Treasure Spirits Co., Ltd., (“Five-Grain”), a company with over one hundred years of tradition in Jilin Province, China. The product will mark the first in a series of ultra-premium organic baijiu spirits to be distilled in the United States. Baijiu, a white spirit distilled from sorghum, similar to vodka but with a fragrant aroma and taste, is the world’s most consumed spirit that boasts sales of over USD 83 billion. Priced up to 10X that of a similarly aged Scotch Whiskey, baijiu is considered the king of all spirits.

CO2-1-0 (CARBON) CORP. (https://CO2-1-0.io) Aims to provide a solution in disruptive new carbon market (voluntary and compliancy market) using blockchain-crypto technology, Internet of Things (IoT), and Six Sigma (6σ) methodology, which will empower the real environmentally sustainable projects (renewable energy, energy savings, heat recovery, industrial waste, agriculture, forestry, and many other new technologies), which projects have started in the USA, Vietnam, Indonesia, other ASEAN countries, and worldwide. It has a clear and systematic product development roadmap, and the ultimate milestones of the products. The solution, methodology, and improved TACCC (transparent, accurate, consistent, complete, and comparable) business process originally introduced by CO2-1-0 (CARBON) will bring full impact to better environment and life of millions. Currently trading at a $35 million market valuation PHIL has 29,877,933,513 shares outstanding, some convertible debt on the books and just over $4 million in assets and minimal revenues to date. While the Company continues to announce exciting initiatives such as launching the first U.S. distilled USDA organic baijiu, a joint venture with Five-Grain Treasure Spirits Co., Ltd., or the MOU with Solar EVN Ngoc Chau to cooperate in a new disruptive carbon mitigation program. PHIL has continued to fall as investors wait on news of the $3.5 billion in funding according to the 2 8k filed earlier this year that PHIL plans to use to build its ambitious Asia Diamond Exchange Project. PHIL does have a massive international following who are ready to buy in large numbers in PHIL, once the reversal starts, it’s a long way back to the highs of $0.098 last summer. We will be updating on PHIL so make sure you Subscribe to Microcapdaily so you know what’s going on with PHIL.