NightFood Hldg Inc (OTCMKTS: NGTF) is moving up the charts since reversing off $0.188 lows. The stock has a long history of big moves running from under $0.20 to highs of $0.92 per share at the beginning of 2019. There is a lot to get excited about on NGTF; Nightfood ice cream is a big hit and is starting to gain real traction and NGTF CEO Sean Folkson is a master of marketing as evidenced by the last time NGTF ran.

Microcapdaily has been reporting on NGTF for years, we reported on February 11, 2019 -“NGTF” is skyrocketing up the chart in recent days after the Company’s ice cream won the 2019 Product of the Year award. As in past years, coverage is expected to include The Today Show, Extra, Women’s Day, The View, The Wall Street Journal, Fox & Friends, The Wendy Williams Show, People, Woman’s World, Parade, The Huffington Post, and countless regional outlets and trade publications. NGTF has quickly attracted a fast growing shareholder base that has transformed the stock into a volume leader in recent days during which it has more than doubled.

NightFood Hldg Inc (OTCMKTS: NGTF) owns Nightfood, Inc. and MJ Munchies, Inc. After manufacturing their first pint in early 2019, Nightfood secured ice cream distribution in multiple Top-10 supermarket chains in the United States, with concentrations in the Carolinas, Mid-Atlantic, the upper Midwest, and New England. Management has also begun to focus on distribution of Nightfood sleep-friendly ice cream in hotels across the United States, and is currently available in certain locations of chains such as Fairfield Inn & Suites (Marriott), Hilton Garden Inn (Hilton), Staybridge Suites (InterContinental Hotels Group), and Residence Inn (Marriott). Nightfood ice cream won the 2019 Product of the Year award in the ice cream category in a Kantar survey of over 40,000 consumers.  On June 26, 2019, Nightfood was named Best New Ice Cream in the 2019 World Dairy Innovation Awards.

Could be the first of a big media rush… https://t.co/KTIc7Rph5I

NGTF CEO Sean Folkson has been working hard behind the scenes, he got the companies filings up to date and up liseted NGTF to fully reporting OTCQB in February of last year stating at the time:  “We believe that being on the QB, instead of the Pinks, has advantages for the Company, as well as for existing and potential investors.” Mr. Fokson is also a whiz at marketing as evidenced by the last time NGTF ran. Now that the stock is on the way up again and Nightfood featured on Rachal Ray on Monday investors are paying attention.

To Find out the inside Scoop on NGTF Subscribe to Microcapdaily.com Right Now by entering your Email in the box below 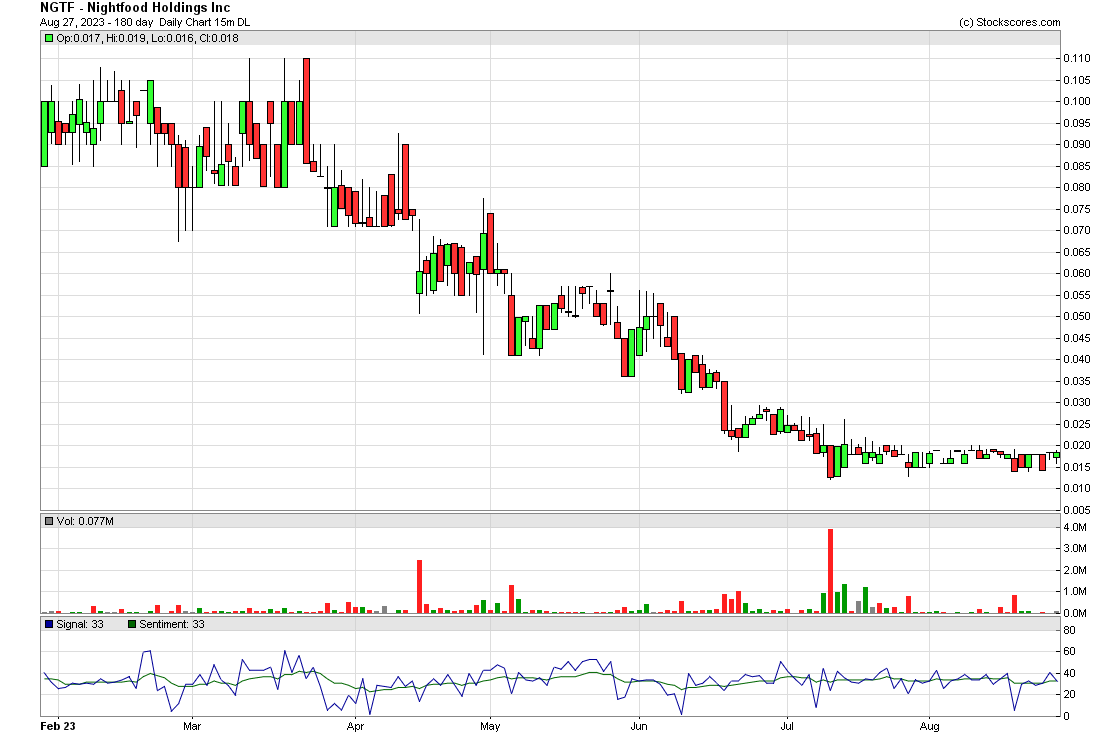 MJ Munchies, Inc. was formed in 2018 as a new, wholly owned subsidiary of Nightfood Holdings, Inc. to capitalize on legally compliant opportunities in the CBD and marijuana edibles and related spaces.  The Company is seeking licensing opportunities to market such products under the brand name “Half-Baked”, for which they’ve successfully secured trademark rights.

NGTF got a boost after the Company announced Nightfood now formally being recommended as the Official Ice Cream of the American Pregnancy Association. The American Pregnancy Association (APA) is a national health organization committed to promoting reproductive and pregnancy wellness through education, support, advocacy and community awareness.  Founded in 1995, the APA currently serves over five million women and families a month through their website and toll-free education helpline.

Nightfood CEO Sean Folkson commented “The buzz on social media about Nightfood has been building, and we noticed an increase in posts from pregnant women. Consulting with our nutrition experts, we discovered that Nightfood’s unique formulation, among all other ice creams on the market, best aligns with the specific nutritional needs women have during pregnancy.  Objectively, Nightfood is the single most appropriate ice cream for moms-to-be and their cravings.  This fact has now been confirmed and endorsed by the American Pregnancy Association. As a father and husband, I wish we had Nightfood ice cream when my wife was pregnant. Then, putting on my CEO hat, I am humbled by the sheer economics of being named the Official Ice Cream of pregnant moms everywhere.  There are over three million pregnant women in the US at any given time.  That’s a tremendous market segment. But I believe the more explosive statistic from an investor perspective is that every day well over 10,000 highly-motivated new women will enter this demographic, day after day after day.”

RT @askzenith: We're excited to announce that Nightfood CEO, Sean Folkson, will be presenting at the 13th Global Dairy Congress! Read all about it at https://t.co/4KezAGcfQZ @nightfoodzZz #Dairy #IceCream #Innovation pic.twitter.com/7BYOcbQ6Jx

Currently trading at a $19 million market valuation NGTF has $147k in the treasury and $4.5 million in current liabilities. but NGTF is an exciting story in small caps – Nightlife ice cream is a big hit that has won numerous awards including the 2019 Product of the Year award. The Company boasts growing revenues reporting $379,488 in sales for the 6 months ended December 31, 2019 up from $136k for the same period last year. NGTF CEO Sean Fokson is also a whiz at marketing as evidenced by the last time NGTF ran. Now that the stock is on the way up again and Nightfood featured on Rachal Ray on Monday investors are paying attention. We will be updating on NGTF when more details emerge so make sure you are subscribed to Microcapdaily so you know what’s going on with NGTF.

Disclosure: we hold no position in NGTF either long or short and we have not been compensated for this article.