Cannabis Strategic Ventures (OTCMKTS: NUGS) is quickly emerging as a grower of high quality cannabis in California and Investors are beginning to take notice as the Company is reporting record revenues month over month. NUGS recently reported it sold $2.3 million in cannabis during September up from $1.3 million in July. NUGS operates NUGS Farm which has been maximizing its production capacity in recent months as well the Company signed an LOI to obtain a new 300,000-square-foot greenhouse facility for cannabis cultivation.

NUGS currently trades near the bottom of its trading range and has a long history of historic moves in recent years that we have covered here on MicroCapdaily. The Company has a seirous go getter behind it in CEO Simon Yu who has been working on hard getting the filings up to date and up listing the Company to the OTCQB Venture Market with an eye on a possible national exchange listing in the future. NUGS is making big moves and penny stock speculators are beginning to notice and are accumulating the stock.

NUGS wholly owned subsidiary NUGS FARM is its flagship cultivation site and one of the largest mixed-light cannabis cultivation operations in the state of California. At full operational capacity, NUGS FARM now cultivates, harvests and process crops on a monthly basis, with each crop yielding approximately 3,500 pounds of quality flower.The Company continues to invest in expanding its production capacity given highly positive pricing trends and tight supply side market conditions in the California cannabis marketplace. To this end NUGS recently signed an LOI to obtain a new 300,000-square-foot greenhouse facility for cannabis cultivation. The new facility would more than double the Company’s cannabis production capacity.

To Find out the inside Scoop on NUGS Subscribe to Microcapdaily.com Right Now by entering your Email in the box below 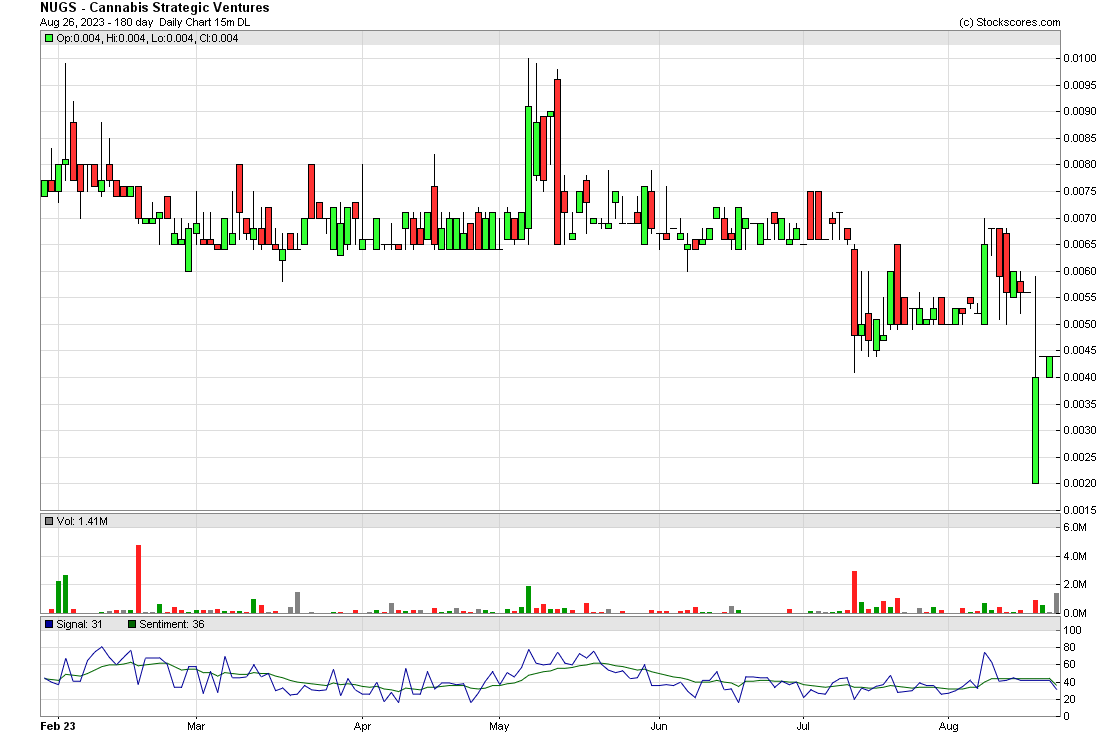 NUGS continues to report record revenues that are growing at an impressive rate month over month proving their ability to grow high quality cannabis. Recently NUGS reported it booked over $2.3 million in total sales from cannabis products during September. That compares to $1.8 million in total sales from cannabis products in August. This represents a sequential monthly growth rate of approximately 28%, reaffirming the overall growth trend that has defined the Company’s performance so far in 2020. Management notes that demand slowed in August due to macro forces. But September’s strong performance represents the Company’s robust growth trend driven by effective positioning, strong product quality and a growing end-market footprint.

NUGS is also smartly investing a lot of time and money into streamlining and refining its cultivated strains. the Company recently reported the NUGS grow team has been working on a comparative evaluation to determine which four strains consistently produce the most optimal results at its cultivation facility. The evaluation is focused on identifying results in terms of year-round harvest productivity, pricing standards, and integrated biological fitness given the precise ecology contextualizing NUGS Farm.

NUGS CEO Simon Yu stated recently: “We continue to see growing market positioning and overall performance despite variable market conditions for cannabis producers over the past two months. It’s remarkable to look back and recall that our target for 2020 for the topline was around $5 million in annual sales. We have already more than doubled that, and we look forward to a very strong run into year-end.”

Currently trading at a $15 million market valuation with 273 million shares outstanding NUGS is emerging as among the most exciting stories in small caps. The Company and its CEO Simon Yu have proven they can grow high quality cannabis and this has propelled them into a fast emerging major supplier to the California cannabis Markets. Sales are skyrocketing; the Company recently reported it sold $2.3 million in cannabis during September up from $1.3 million in July. NUGS operates NUGS Farm which has been maximizing its production capacity in recent months. NUGS also recently signed an LOI to obtain an additional 300,000-square-foot greenhouse facility for cannabis cultivation. Microcapdaily has been covering NUGS for years. We will be updating on NUGS when more details emerge so make sure you are subscribed to Microcapdaily so you know what’s going on with NUGS.

Disclosure: we hold no position in NUGS either long or short and we have not been compensated for this article.