Oculus VisionTech Inc (OTCMKTS: OVTZ) There is A Lot in a Name like Oculus Oculus VisionTech Inc (OTCMKTS: OVTZ) has seen a fast rise up the charts in recent months from a start point of $0.10 to recent highs of $1.45. During that time the stock has transformed from thinly traded and illiquid to heavily traded topping $1 million plus in dollar volume per day.

Many investors may be mistaking Facebooks Oculus VR with bulletin board traded Oculus VisionTech Inc: OVTZ. Mistaken identity stocks that make big runs are fairly common and the runs can go on for months. We have reported on a number of them here at Microcapdaily including ZOOM which has changed its ticker since and more recently Signal Advance; SIGL which saw its stock jump from pennies to over $4 per share earlier this year.

Oculus VisionTech Inc (OTCMKTS: OVTZ) is a publicly-traded cyber security and data privacy company that creates systems for document and multimedia protection. OVT is a recognized leading provider of forensic watermarking solutions.  Headquartered in Vancouver, British Columbia, Canada, the company was founded by experts in image processing and is operated by experienced leadership.  Using patented technology, OVT created the image-based Document Protection System (DPS) that incorporates anti-tampering technology pioneered by OVT for document and multimedia protection to combat tampering and digital piracy. Clients such as 20th Century Fox use the OVT SmartMarks technology to help protect their content from video piracy.  Currently, OVT is expanding and investing in a suite of new data privacy security products that will revolutionize CCPA, GDPR, LGPD and other data privacy legislation compliance for both data subjects and data controllers worldwide. OVT will continue to help solve cyber security and data privacy problems across a variety of industries and markets in the months ahead.

Facebook’s Oculus has been busy; the Oculus Quest 2 has widely been seen as a success, further penetrating the mainstream consumer market with its controlled pricing – even cheaper than the original Quest, with better performance – and it garnered 4.5 stars in our Quest 2 review. Speaking to investors, Zuckerberg confirmed that, “We’re continuing to work on new hardware as well. The new hardware will fit the same platform, so the content that works on Quest 2 should be forward-compatible, so that we’re going to build one larger install base around the virtual reality headsets that we have.” SK Telecom, South Korea’s largest wireless carrier, said on Monday it will release the latest virtual reality (VR) device by Facebook, the Oculus Quest 2, as the telecom operator seeks to expand its presence in the local VR market. The Oculus Quest 2 will go on sale from $370 at SK Telecom’s retail and online stores. Facebooks Oculus has nothing to do with Oculus VisionTech Inc

In April of last year OVTZ reported the planned expansion of its suite of data security products through the acquisition of 100% of the shares of OCL Technologies Corp. a Delaware Corporation, with its head office located in the technology hub of San Diego, California. OCL is specifically focused on providing enterprise organizations and individuals with highly-secure data privacy tools that provide sustained and continuous global regulatory compliance of data subject rights, while independently protecting all parties. With the burgeoning growth of privacy regulation worldwide coupled with strict regulatory oversight, companies are dedicating significant resources to achieve and maintain compliance. In the past two years alone, initiatives such as the EU GDPR (General Data Protection Regulation effective May 25, 2018) as well as the CCPA (California Consumer Privacy Act passed June 28, 2018 and effective January 1, 2020) have mandated privacy rights and data protection for entities and individuals contemplated within their legislative frameworks. In addition to these, there are additional data privacy legislative initiatives on-going in Asia and both North and South America which will require data protection solutions. Oculus believes that the acquisition of OCL is a tremendous fit within its core objective of developing robust cutting edge technologies that address focused customer data protection requirements on a global scale.

To Find out the inside Scoop on OVTZ Subscribe to Microcapdaily.com Right Now by entering your Email in the box below 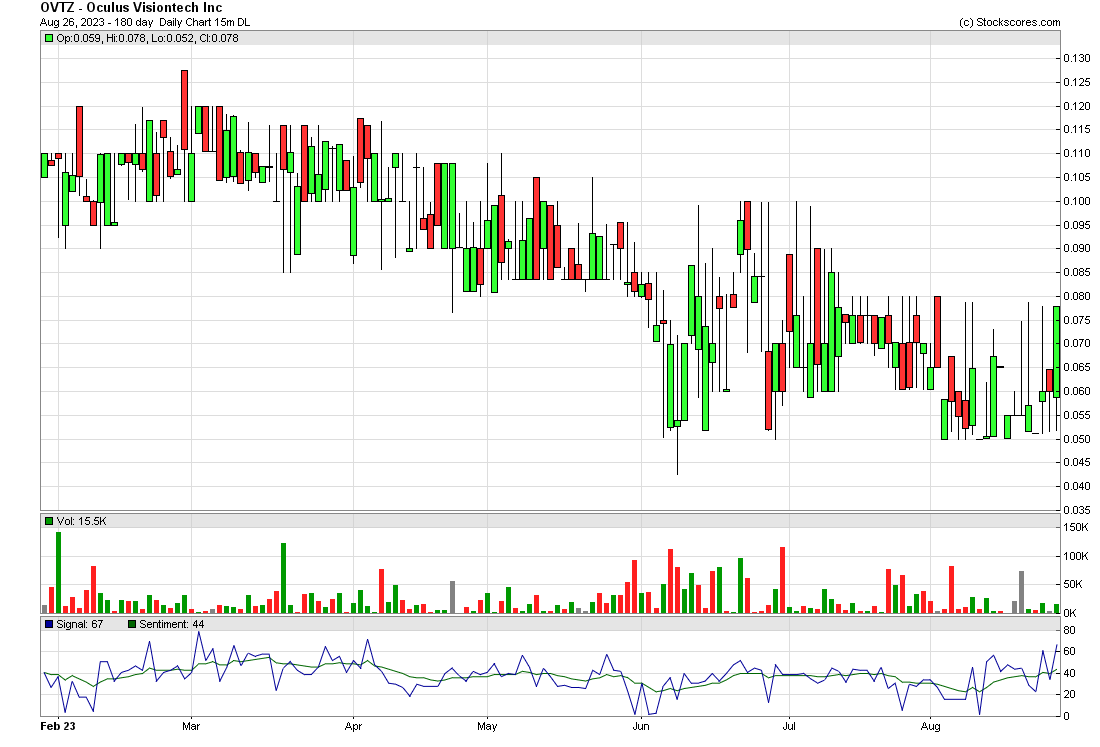 “OCL’s Right-To-Be-Forgotten Platform will address the requirements of data privacy regulation implementing a modern platform to ensure compliance across an organization’s entire array of data processing capabilities. We are excited to add the OCL platform to the Oculus product offering. As a developer of next generation data protection and security offerings, we see a synergy between the Oculus DPS Cloud document protection system and the Right-To-Be-Forgotten Platform and our team will be examining unique applications and market opportunities for Oculus. We look forward to reporting on more developments with respect to both the details of the product offering and opportunities for Oculus imminently” stated Rowland Perkins the CEO of the Company.

On December 1 OVTZ announced preparation for the launch of their “Forget Me Yes™”. data privacy compliance platform. The launch of the “Forget Me Yes™” (FMY) platform, in conjunction with its Data Protection System (DPS), will allow Oculus VisionTech to offer a line of security and regulatory required product(s) that target the fast growing market for cloud native and hybrid cloud business.

“The “FMY™” platform will be a business-critical component for most databases that operate with Customer Relationship Management (CRM) software tools. This would mean businesses in countries where Data Privacy regulation have been implemented (including Canada’s newly proposed C-11 draft to PIPEDA) are potential customers of Oculus VisionTech.,” stated Rowland Perkins, CEO of Oculus VisionTech.

International Data Corporation forecasts that the worldwide data privacy market grew 60.29% in 2019 and is expected to be a multi-billion market by 2023.

In addition, OVT advises that our wholly owned subsidiary OCL Technologies Corp. has recently been featured on Blocks & Files regarding our FMY™ Software-as-a-Service API Platform No financial nor share consideration was paid for this blog, and OVT is not aware as to whether B&F currently have any share ownership.

OVTZ has seen a fast rise up the charts in recent months from a start point of $0.10 to recent highs of $1.45. During that time the stock has transformed from thinly traded and illiquid to heavily traded topping $1 million plus in dollar volume per day. Many investors may be mistaking Facebooks Oculus VR with bulletin board traded Oculus VisionTech Inc: OVTZ. Mistaken identity stocks that make big runs are fairly common and the runs can go on for months. We have reported on a number of them here at Microcapdaily including ZOOM which has changed its ticker since and more recently Signal Advance; SIGL which saw its stock jump from pennies to over $4 per share earlier this year. We will be updating on OVTZ when more details emerge so make sure you are subscribed to Microcapdaily so you know what’s going on with OVTZ.

Disclosure: we hold no position in OVTZ either long or short and we have not been compensated for this article.